Gautama Buddha and the Wheel of Dharma

Are we living in a spiritually significant time? Sadhguru explains, because stress, strife and suffering have reached their peak, interest in spirituality is also reaching new heights.

Q: Gautama Buddha said the Wheel of Dharma will turn full cycle in two thousand five hundred years. We are close to that now. Can you comment on this?

Sadhguru: Gautama the Buddha declared that two thousand five hundred years after his time, a new cycle will begin. We will not be here to see it happening, but in the next two hundred years, especially for India, and in many ways in the rest of the world also, developments will happen, especially on the spiritual plane. In many ways it will start a new revolution of its own.

This point of time that we are in is the most spiritually significant for the world. Right now, the world is more comfortable than it ever was. At the same time, it is more stressful and uncertain than it ever was. Never before have the general mass of people been as interested in spirituality as they are today. As strife and struggle in the world has increased, interest in the inner world has also increased. In a way, if you look at it, this is a tremendous step. If this process continues, if this interest deepens in every human being on the planet, it is the solution and salvation for humanity in many ways.

As strife and struggle in the world has increased, interest in the inner world has also increased.

There was a time when one Ashoka or Gautama Buddha realized that conquering the external does not get us anywhere. But today, an ordinary citizen in the world is beginning to realize this. This is simply because we have the aid of science and technology with which all of us can see that we can go to the Moon and Mars, but within ourselves, we are not getting anywhere.

A moment like this is significant spiritually; the world is becoming more spiritual than ever before because strife, struggle and suffering has reached its peak in so many ways.

Editor's Note:  The “Power to Create” meditations for Peace, Love, Health and Success (also known as “Chit Shakti”) enable each one of us to become our own alchemist, by empowering us to transform long cherished desires into reality. Try them out!

A version of this article was originally published in Isha Forest Flower January 2009. 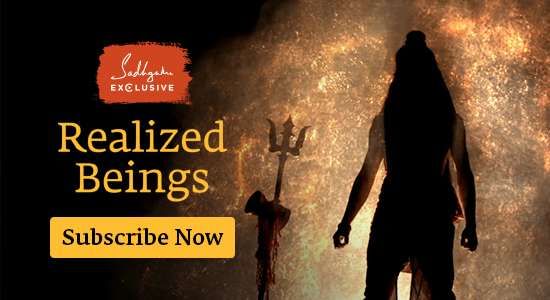 Buddha
Spirituality
Suffering
Stress
Transformation
Sadhana
Wisdom
Related Content
article
Building India
Sadhguru says, every society needs individuals who will go on planting mango trees without thinking whether they will get to eat the fruit or not.
Jul 29, 2013
article
How India Can Shape The Future
Sadhguru addresses India’s position in the world and how it can shape the future during an interview, and answers questions about nationalist passions, India’s soft power, peace, yoga and more.
Jan 25, 2019
article
Creating a Wave of Consciousness around the World
Sadhguru answers a question on raising human consciousness and Isha’s role in this process.
Jun 19, 2014
Close