The Devotees of Dhyanalinga (part 2)

Here are the stories of two beings who are honored in the stone panels of the Dhyanalinga Inner Parikrama.

Meiporul Nayanar was the king of a prosperous city in South India. Muthanathan, the neighboring king was jealous of Meiporul and tried to conquer the city. But he failed and lost many men in the battle. He then decided that if Meiporul Nayanar could not be killed in war, he would have to be killed in disguise.

Muthanathan dressed up as a Shiva Bhakta (a devotee of Shiva) and went to Meiporul’s palatial house. With vibhuti (sacred ash) smeared on his forehead and arms, he declared himself as a Shaiva saint who had come to offer his teachings to Meiporul Nayanar. Meiporul, being a Shiva Bhakta himself, had set a rule that no Shiva Bhakta should be restricted from meeting him. After receiving him with the best of food and clothing, the guard took him to Meiporul’s private chambers, where Meiporul was sitting with his wife. The “saint” told Meiporul’s wife that he wanted this teaching to happen in utmost privacy. She left the room, leaving both Meiporul and Muthanathan alone together.

As Meiporul came close to Muthanathan with folded hands, the guised saint swiftly took out his dagger and pierced him in the back. With a deep wound, in a pool of blood, Meiporul was crying in pain. Hearing this, the guard came rushing in. Shocked by the scene, he took out his weapon to kill Muthanathan. However, seeing the holy ashes on Muthanathan’s forehead and arms, Meiporul stopped the guard, saying, “This man is wearing the sacred ash. He is one of Shiva’s men. Please do not harm him. Guide him to the outskirts of the country and ask him to go back to his home.” The guard was fuming with anger, but he could not refuse his master’s instruction. Pleased with Meiporul’s devotion, it is said that Shiva himself appeared before him in the last few minutes of his life and blessed him. 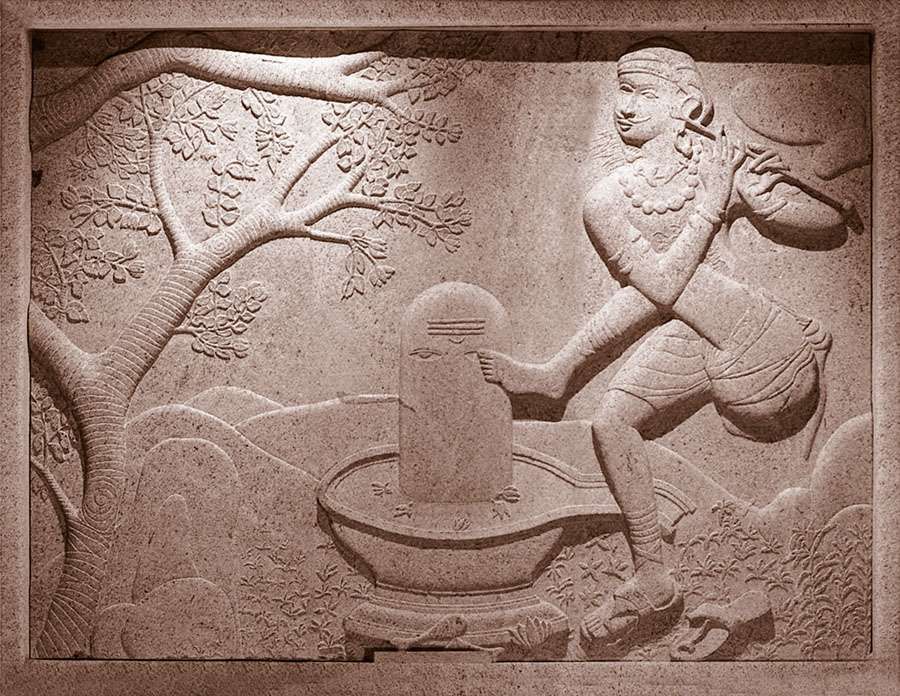 One day, Thinnan, a reputed archer went on a hunting expedition. In the forest, he came across a small shrine for Shiva with a linga. Thinnan was filled with a deep love for Shiva and wished to make an offering, though he did not know the proper methods to do so. He innocently offered the meat he had with him to the linga and left, happy that Shiva accepted his offering.

This shrine was cared for by a brahmin who lived far away. Though he was a devotee of Shiva, he could not make the long journey to the shrine every day, so he only came once a fortnight. When the Brahmin came the next day, he was shocked to see meat lying next to the linga. Thinking this had been done by an animal, he cleaned the shrine, continued his poojas, and left. The next day, Thinnan brought more meat offerings, and because he did not know any poojas or rituals, he sat and spoke, pouring out his heart to Shiva. He started coming every day to make his meat offerings. One day, he felt the linga needed cleaning, but had no vessels to fetch water in. So he went to the stream and filling his mouth with water, poured it onto the linga with his mouth.

When the brahmin returned to the shrine, he was repulsed by the sight of meat in the shrine and spittle on the lingam. He knew this could not have been done by an animal. It had to be a human being. He cleaned the shrine, chanted mantras to purify the linga before his pooja, made his offerings, and left. However, every time he came, he saw that the linga was back in the same “impure” state. One day, in tears, he cried to Shiva saying, “How can you, the Lord of Lords, allow such disgrace to be done to you?” Shiva replied, “What you consider a disgrace is an offering made by another devotee. I am bound by his devotion and accept all he offers to me. If you wish to see the depth of his devotion, please hide somewhere nearby and watch. He will be coming soon.”

The Brahmin hid behind a bush while Thinnan came with meat and water. He was surprised to see Shiva did not accept his offerings as usual. Wondering what he did wrong, he looked closely at the linga and noticed something was oozing from the right eye. He applied herbs to the eye hoping to cure it, but more blood oozed out. Finally, he decided to offer his own eye. He took one of his knives, cut out his right eye and placed it on the linga. The blood stopped oozing and Thinnan was relieved, but then noticed that the linga’s left eye was also bleeding. He immediately set the knife to remove his other eye, but then realized that he would not be able to see where to place it. So he placed his leg on the linga and removed his eye from its socket. Seeing his absolute devotion, Shiva appeared before Thinnan, who regained his sight and prostrated before him. He became known as Kannappa Nayanar, the “Nayanar” (a devotee of Shiva) who offered his eyes (Kanna).

Editor's Note: To explain the nature of the Dhyanalinga consecration, Sadhguru narrates an incident from an Inner Engineering program where an artist intuitively scribbled a perfect image of the Dhyanalinga. He also gives a simple process to access the energies of Dhyanalinga, which are not limited by time and space.June 24, 2021, marks the 22nd anniversary of the Dhyanalinga Consecration. Join the livestream of the multi-religious chants and songs that are offered to Dhyanalinga from 6 am to 6:10 pm (IST).