Samskrita Dinam is a cultural celebration at Isha Samskriti that seeks to spread awareness about Sanskrit language. Let’s read how the students put together a fabulous play depicting the life of Chanakya – an iconic figure in Indian History.

On 13th August, 2019, the students of Isha Samskriti put together a scintillating play that transported all the residents and visitors of Isha Yoga Center to 300 BC, as they watched Chanakya practice his statecraft and political cunning to set up the Mauryan Empire, uniting large parts of India into one sprawling empire.

Masterfully put together and flawlessly executed, the rapt audience couldn’t believe that the entire play was conceived and presented by students, the oldest being barely 17 years of age. And since the occasion was Samskrita Dinam or Sanskrit Day, all the dialogues were in Sanskrit!

We talked to the students who put the play together and they explained how it all came to be:

“We saw this picture of Chanakya on the cover of an economics book, and the idea struck us that maybe we can do a play about the life of Chanakya.

Rigorous research followed. Jain, Buddhist, and many other texts were consulted before the story started taking shape. Our Sanskrit teacher, who knew a little bit of the history around it, provided the final inputs and the play was born. The initial idea for how long the play would run was about twenty-five minutes as that has been the usual timeframe for events done on Samskrita Dinam. However, after discussions about the dais setup, decoration, and our conceptualization of the play, the whole drama was scaled up from being just a normal play into what it finally came to be – a 50-minute saga about Chanakya.

The decision to go with Chanakya was taken in April, but the actual work took about three and a half to four months. From visualizing the exact way the props would be and the exact design of the dais, to how actually we wanted the drama to be – all the fighting parts, dances and everything that was involved in the whole play was done in the last two months, from June to August. To zero in on the final ideas for everything, it took two months, but the actual work was done in an intense hive of activity in the last 20 days.” 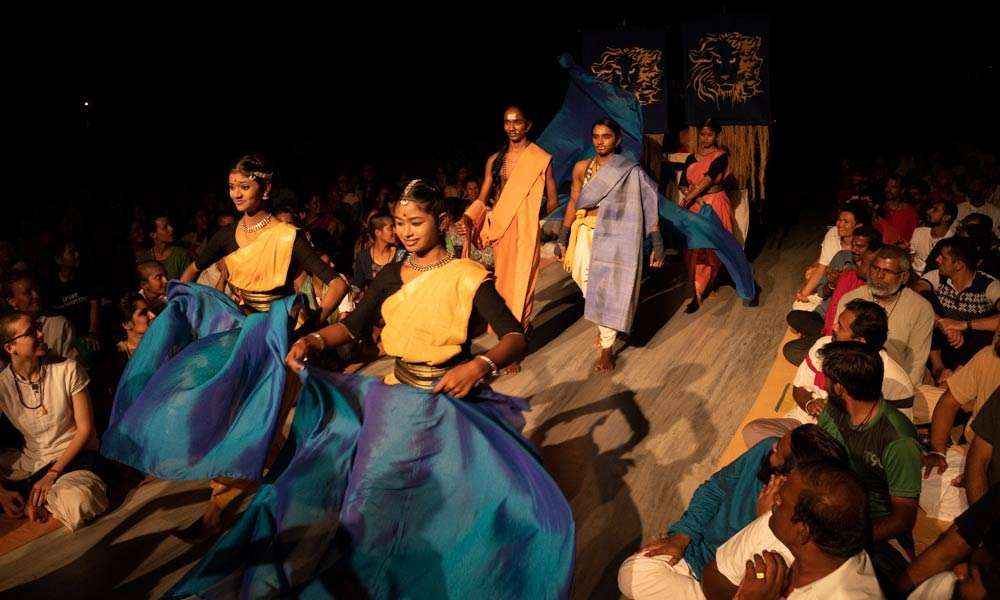 All the core subjects taught at Isha Samskriti – classical music, classical dance, kalaripayattu (an ancient Indian Martial art) and Sanskrit language – were incorporated into the play. The students’ kalaripayattu training led to some gripping fight scenes while their classical dance repertoire was on full display, adding fabulous color to the story. The mesmerizing backdrop and meticulously designed props were testament to the students’ skill at art and craft. And of course, all the dialogues were in Sanskrit. In fact, the script for the play was written by a student who was specializing in Sanskrit language.

The students are not trained in theatre per se, and all the plays that are put together are done without any professional guidance. For events like Samskrita Dinam, Krishna Jayanti or Ganesh Chaturthi, plays are curated mostly from history or mythology. Sometimes, plays are made up by Samskriti students and performed with whatever knowledge they have in acting, lighting and sound. The actors shared with us that when they feel the character and put themselves into their shoes, the performance comes out to be effortlessly natural.

The passionate performance of the Isha Samskriti students bewitched all, as they portrayed the life and times of the legendary Indian teacher, philosopher, economist and kingmaker. Chanakya played a pivotal role in establishing the powerful Mauryan Empire, which spanned almost the whole Indian subcontinent, extending up to what is currently Afghanistan. The saga of Chanakya’s relentless pursuit to establish a glorious empire was brought to life through powerful theatrical performances and solid stagecraft by the students. The audience was delighted to see the students portraying electrifying battle scenes, ruthless strategizing, the pain of failure and the sweetness of victory with the ease and élan of seasoned theatre artistes.

“First when they called me and told me that I was doing something for Samskrita Dinam, I felt so happy. During practice, I used to be scared but slowly it went away. On that day, when I stepped onto the dais, all the fear came back. After the drama got over, I was so happy because my parents had come, everybody from Samskriti was there, and the whole of the ashram had seen me.” – Agastya Hajela - 8 years old (as one of Chanakya’s younger students)

“It was a memorable experience for me because though I’ve done many dramas before, in this one, I could feel the character within me very much. And after the drama got over, I was sad that I wouldn’t get to do Chandragupta again. I got a bit injured before the play and we were really sceptical on whether we would be able to do it or not. Somehow, on stage, I don’t know how it happened but there was no pain. I gave myself fully to the role.” – Venugopala S. - 16 years old (as Chandragupta, Chanakya’s chosen disciple)

“This is the first time that I have acted in the main drama in the event. I didn’t know what to do when I entered the dais. Everything just happened on its own. I would especially like to thank my seniors who were very patient with me, gave me a lot of tips on how to enact the role better. That afternoon, I had given up and said, ‘I can’t do Chanakya because I don’t have the mood.’ But somehow it happened. When I first sat on my seat, I thought I would flop the drama! But now I think I’ve done a fine job.” – Siva Maadhesh V.B. - 15 years old (as Chanakya)

An Isha Samskriti Teacher Shares Her Experience Of Watching The Play

“Isha Samskriti has been having this event for almost 10 years. I’ve seen all the Samskrita Dinams, and I’ve seen it becoming better and better. I thoroughly enjoyed this Samskrita Dinam. What I observed was that there was a lot of involvement. Many different areas which could be technical, be it narration, make-up, or performing, a lot of children who are very, very young showed a lot of responsibility and took up these big responsibilities. It was very heartening to see this. It’s also very promising because they probably will take up bigger roles in the future.

There is also another beautiful thing I observed in this year’s Samskrita Dinam that there was a lot of learning for them. They threw themselves into it. They gave their fullest to do this because I presume, they enjoyed the whole output. Children who had always performed main roles, have now started directing the play. I’m actually seeing how Samskriti is growing and blossoming.” – Shanti Sukumar (Teacher)

In conclusion, it must be said that it is quite a feat to retain the audience’s attention and interest when the play is in a language unfamiliar to them. Isha Samskriti’s “Chanakya – A Kingmaker” has managed to accomplish that and more.

“We were transported into a time where Chanakya managed to unite a largely divided nation. The radiant display of dance and color was a treat to watch. It made me feel proud of being a part of a land so culturally rich. I am grateful to Isha Samskriti for sharing such an artful profoundness with us through such a play.” – A member of the audience

Editor’s note: Isha Samskriti was founded by Sadhguru and is envisioned as an offering to children. It provides an ideal environment for children to unfold in harmony within themselves and with the world around them.