Join us on the blog for up-to-date coverage of the Adiyogi consecration. Stay tuned on this page for photos, news and footage from the event.

The consecration of the Adiyogi Alayam happened in a glorious manner, witnessed live by over 10,000 people. To re-create the grandeur of the whole event, Isha has put together the Adiyogi Alayam Glimpses Photo CD, with over 80 photos taken from the program. A perfect way to behold the miraculous event of consecration...

Watch a video of participants sharing their experiences during the Adiyogi Alayam Consecration.

The program ended past midnight, many people not ready to believe that the two days were already over. Sadhguru, accompanied by Sounds of Isha, sang "Yogeshwara" with his hands folded until the last moment he exited the venue.

Sadhguru answers questions on a variety of topics, from creating the right atmosphere for sadhana to significance of matted locks to going beyond ones limitations.

Consecrating people would be the best thing to do because you can move people wherever you want, you can't move this hall wherever you want. But people in today's world have become unreliable, every two days people's intentions keeps shifting... So I am just working the way it works in today's world... If the space is powerful, whoever comes here is touched and transformed.

Question and answer session with Sadhguru - "What is the difference between consecrating a space, a human being and a form?"

Crowd bursts into applause as Sadhguru acknowledges all the Brahmacharis and residents who've been working continuously over the last three months to make the Adiyogi Alayam happen.

Consecration of the Adiyogi Alayam is complete. The session with Sadhguru continued at 9:15 after dinner break.

The gigantic anklet is lifted by seven Brahmacharis and carried to the entrance of the Alayam and placed around the Adiyogi's right foot. 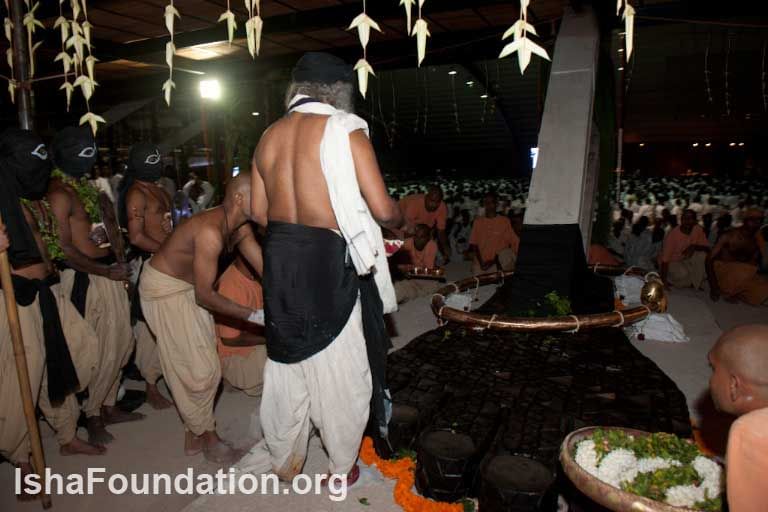 He applies kumkum on the linga, draws a set of eyes and places jata on the linga. He then performs a Guru pooja to the Adiyogi and the crowd joins. Then offering of pancha bhutas is followed by a Maha Aarti performed by the Brahmacharis.

Sadhguru presses the sole of his right foot. A wave of intense cries fills the hall. He then pours water on the linga and removes the cloth from the linga. He smears the venom on the Adiyogi Linga.

Vibhuti is smeared on Sadhguru's right foot. Sadhguru then pours venom of a black cobra into a glass flask and stoppers it. As he shakes the flask, cries of being overwhelmed emit from the crowd.

Remnants from the fire process mixed with castor oil, along with black sesame seeds, was offered to all the participants to be applied upon their foreheads.

A quiet Sea
A quiet Day
A quiet Mind

But a raging Heart
Blazing with the Fire
Of an ancient Sage.

Burning for many a millennia
Destructive for the ignorant
Enlightening for the seeking
Brutal to the stubborn
Tender to the willing.

Will be a worthy place to dwell here
and a passage to the ways of the beyond.

O' how fortunate are we
To carry the Fire of the Adiyogi.

Sadhguru does a process with fire in front of the consecrated seat for the Adiyogi Alayam.

10,000 participants chant in unison to sensitize the space for the consecration. The space feels uplifting and peaceful.

Samskruti students perform Shivagaami dance - a tribute to the Adiyogi and story of how the Velliangiri mountains became the Kailash of the South.

Stability and balance are the most important aspects, whatever one wishes to do

Guru Pooja was performed in front of the consecrated stone base, which will form the seat for the Adiyogi Alayam. Sadhguru then sat and is now explaining about the consecration process which just happened.

The stone lid has been slide into place on a metal scaffold, after which Sadhguru decorated the engraved sun and moon with turmeric and kumkum paste.

The lid has been placed on the brass vessel and Sadhguru has made a thick circle, about a hand-breadth across, out of turmeric paste and sesame seeds, which is in the center of the lid. Sadhguru then removed his mala, placing it over the brass container, after which the stone pit was covered with a white cloth.

Sadhguru has spread vibhuti over both of his arms and has partially filled the brass vessel with sacred ingredients. He is now placing the container into the stone pit with the help of the Bramhacharis.

Sadhguru, along with the Bramhacharis, is now preparing a large, cylindrical brass vessel, which will be a powerful foundation for the Adiyogi Alayam Consecration.

Sadhguru with Bramhacharis preparing separate stone structure next to Linga for consecration. This will be the base for the dais in the Adiyogi Alayam.

Sadhguru in Adiyogi Alayam - chanting with participants while walking back and forth in front of hall, making an infinity symbol with his right hand.

Sadhguru is making preparations for next phase of consecration process.

Participants chant in the Adiyogi Alayam in preparation for today's consecration.

After the process with the vibhuti was completed, Sadhguru performed an Aarthi in front of the Linga, moving the flame in a figure-eight - the symbol of the Infinite. Following this, he broke out into "Yogeshwaraya", joined by Sounds of Isha. At the closing, Sadhguru prepared the participants for the next day, saying that while today happened well, tomorrow will be crucial and that they should be alert to everything that is happening there.

With burning camphor and torches, Sadhguru began the consecration of the Adiyogi Alayam Linga. 20,000 eager eyes watched as Sadhguru used various materials and processes to energize the Linga. The chanting then continued as Sadhguru lit the top with flames of camphor, after which he did a process for the crown of the Linga. A short break for the participants followed, stay tuned for more updates!

Today evening, participants witnessed another procession - this time for an enormous anklet made of copper, a symbol of the Adiyogi. A fitting offering to the First Yogi, the anklet was carried by seven bramhacharis in a procession led by Sadhguru. Accompanied by chants and the thundering beat of drums, the anklet came to rest in front of the Linga, where Sadhguru began a consecration process while the participants chanted in the background.

Over 10,000 participants joined together today to take part in the Adiyogi Alayam Consecration. Sadhguru first spoke about the significance of consecration and told those gathered that they weren't here to witness a consecration - they were here to participate in one! In order to create the right kind of situation where each person could give himself to the fullest, Sadhguru gave the participants a mantra which had been specifically created for this purpose. Chanting went on today for much of the afternoon, which was followed by a video covering the unique and sacred consecrations that have happened in Isha over the last two decades, starting with the Dhyanalinga onwards.

Participants are on a break now until 4:30 - more updates soon...

Over the past few months, the Adiyogi Alayam has been converted from open land into a magnificent hall, capable of holding over 6,000 people. View the video to get a glimpse of how the whole transformation took place, starting with the Bhumi Pooja to the mass-scale construction to last night's process where Sadhguru established the Linga to be used in the consecration.

Prana Pratishtha
Sadhguru speaks about consecration and the impact it has on our lives.

Did You Know?
10 Facts about the Adiyogi Alayam

Sadhguru's Spot
Constructing What is Worthwhile

Why were Temples Built?
Science behind the construction

The First Tribute
Bhumi Pooja of the Adiyogi Alayam

Ashram Expansion Underway
The First Post on the Adiyogi Alayam

Adiyogi
Related Content
article
Behind the Scenes: What It Takes To Deliver 3.5 Million Rudraksha Beads Around The World
Isha volunteers have taken up the mammoth task of offering 3.5 Million Rudraksha beads around the world. Though the COVID-19 second wave has impacted this effort, 2 Million Rudraksha beads have been dispatched and 6 lakh beads delivered.
Jun 3, 2021
Loading...
Loading...
article
Adiyogi Divya Darshanam Wins Prestigious Global Award
Adiyogi Divya Darshanam, a one of its kind light and sound show, wins an international award.
May 12, 2020
Loading...
Loading...
article
12 Things You Probably Didn’t Know About 112-ft Adiyogi
With Mahashivratri taking place on 21 February, 2020, the Isha Yoga Center is gearing up for this exuberant nightlong festival held in the presence of Adiyogi. Here are 12 things you need to know about the 112-ft Adiyogi before you visit.
Feb 20, 2020
Loading...
Loading...
Close