Kalabhairava Karma – A Process for the Departed

In the Yogic culture, when someone dies without the necessary awareness to conduct their death properly, there are systems to assist the departed. Sadhguru explains two such processes – Kalabhairava Karma and Kalabhairava Shanti.

What is Kalabhairava Karma?

Sadhguru: This process called “Kalabhairava Karma.” This is for the dead only, to ensure that their new location is a better place. When someone dies, you think that person is dead, but as far as that person is concerned, he just lost his body and everything that he knew as life. When he lost his body, he also lost his discretionary mind. What does losing your discretion mean? Let's say somebody that you know died and you became sad and miserable. Maybe you will grieve for a while, but after a certain passage of time, you will employ your discretion. “There is no point just going on like this, let me get back to whatever I need to do.” But someone who is unable to employ his discretion will stay in that state for a long time, because the discretionary mind is not functioning as it should. Whatever his tendencies are, those tendencies will multiply. If he had pleasant tendencies, pleasant tendencies will snowball; if he had unpleasant tendencies, that will avalanche into something extremely unpleasant.
Every culture has been aware of this – irrespective of where or what religion – when a man is dying, whoever he may be, you must create a pleasant atmosphere.

Every culture has been aware of this – irrespective of where or what religion – when a man is dying, whoever he may be, you must create a pleasant atmosphere. Even if your enemy is dying, at that one moment you do not create unpleasantness for him. Either the last moment or just after, we can still touch that life in such a way that pleasantness will seep into that life. Once even a drop of pleasantness is put into him, this will become an ocean of pleasantness after some time because he has no discretion.

What is Kalabhairava Shanti Process?

This has been very much a part of Yogic culture, that if someone dies and does not have the awareness to conduct his death properly, then someone else does it for him. But unfortunately, probably in the last 100-150 years, these traditions have become largely dormant. What is left is generally corrupt and commercial. If you lose someone who is dear to you, they will ask you to bring footwear for the dead, bring an umbrella for the dead. One who has lost his body is not going to wear footwear. If the man who is conducting this wants footwear, he must be upfront and say, “I want footwear.” At least he will get the right size. If he gets the dead man’s size, he has to go and sell it.

We will be using Linga Bhairavi’s abode as the energy base and conducting certain processes for the dead. If someone that you know dies, or if you know someone else who has had someone die, then within a certain period of time, a certain process can be done.

Kalabhairava Karma - Not About the Body 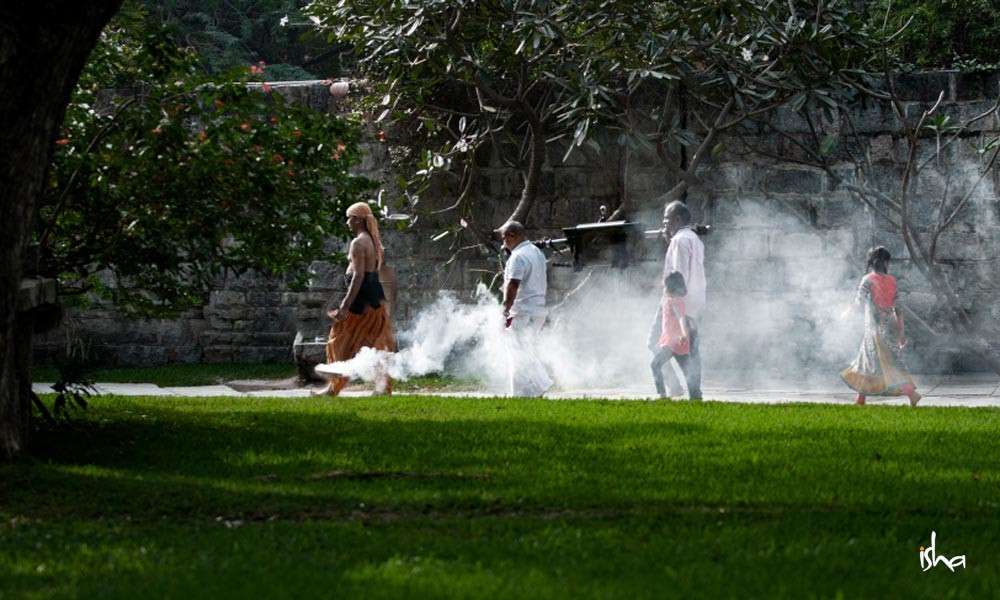 Questioner: Sadhguru, if someone wants to donate his body to a medical college, will there be any meaning in performing Kalabhairava Karma?

Sadhguru: There is no need to do Kalabhairava Karma for the physical body. The body should be burnt and go back to the earth. If one or two parts of the body can still be useful for some time, they can be put in some other machine that is not working properly. Kalabhairava Karma is about that dimension which has left the body. We only want something that was in touch with the body because the body carries memory, so we use an article of clothing and a photo so that there is recognition to connect the two dimensions.

Kalabhairava Karma is about that bubble of memory that is still floating around and seeking another body.

You do not do things for the body after death. It does not make any sense. If it were for the body, we would have done the process while the person was still alive. Kalabhairava Karma is about that bubble of memory that is still floating around and seeking another body. It is to bring some sense into that being because when they were in the body, they would not listen. But now they no longer have a discerning mind; we can do much more with one who has lost his intellect. When the discerning mind is gone, it means there is no longer a sieve. It is just an open hole – you can put whatever you want in it. A sieve filters everything out that you do not like. That is almost the entire universe! For sure, Shiva would stay out.

In a way, the whole process of becoming meditative is a simulation of death. Death means the body is no more a problem, and there is no discerning intellect. Your discernment is a product of past experience and impression. One may have a finer sense of discernment than the other, but essentially you are dividing that which cannot be divided in its ultimate nature. Discernment is a way of falling from ultimate sense to immediate sense.

Kayantha Sthanam is Isha’s Cremation Service that revives ancient traditions and death rituals with a powerful energy basis, conducting them in the spirit of service rather than as a commercial venture. We request your support and contributions to help us offer these services to more people. Donate now by clicking the respective links for Indian Residents and Overseas Residents.

Death
Mysticism
Indian Culture
Linga Bhairavi
Body
Spirituality
Wisdom
Related Content
article
Death and Dissolution: The Role of a Master
Sadhguru answers a series of question on whether someone can be dissolved at the moment of death, even if they were not at the point of liberation.
Aug 11, 2015
article
How to Die Peacefully: Ensuring a peaceful death for a loved one
Death is inevitable, but only a few people have the fortune of a graceful death. Sadhguru tells us about how to ensure a graceful exit for a dying person, and the importance of taking away the "choppiness" of death.
Jan 7, 2013
article
Stages of Death and the Importance of Death Rituals
We look at the various stages of death according to the yogic system, and explore the significance of shraddh, the death rituals in the Indian way of life.
Jul 4, 2014
Close