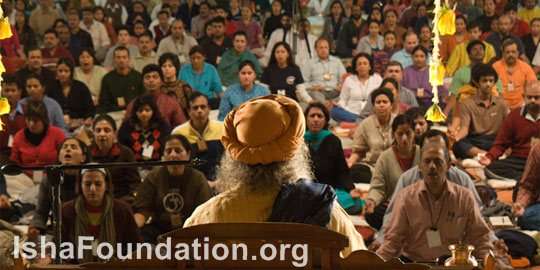 The choice of venue could not have been better - sitting under the complex expanse of the spaciously designed dome of the Shankar Lal Auditorium in Modern School, New Delhi, was aptly fitting the overwhelming experience that participants of the Inner Engineering program with Sadhguru would go through.

The run up to the event was in itself quite amazing. The Inner Engineering program created by Sadhguru practically reintroduces you to the core of your being. Teachers from the Ashram have held many programs in Delhi over the last six years and awareness of the vast possibilities that Isha Yoga opens up has been growing steadily in India's capital. To have Sadhguru himself introduce Inner Engineering here now was a privileged opportunity, not only for the participants, but for Isha volunteers who put in an unstinted effort to make sure all logistics were in place.

Not surprisingly, over 575 people registered for the program that was scheduled from 19 to 21 December 2008 and another 300, equally eager to be initiated by Sadhguru, were on the waiting list. Sadhguru's talk a few weeks earlier at Sri Fort Auditorium had entranced many attendees. Since then, everywhere in Delhi, people were talking about this wonderful mystic and "did you hear him speak at Sri Fort?" The Anand Lehar ‘Wave of Bliss' that Sadhguru had envisaged was beginning to take shape.

"I just felt I was the only one in the place and he was talking directly to me and so completely about me," a participant said at the end of the first day. But there were 549 others who felt exactly the same way! …The same went for the more than 150 volunteers who had been quietly working for many days to ensure that the experience was seamless. Eager and excited participants were not quite prepared for Sadhguru's gentle dismantling of pre-conditioned beliefs, his cheerful setting aside of faiths and religious theories, his intelligent wit that poked fun at everyone, at life and the way we live it. Sadhguru's clarity and truth cut through the fog of mind, body and being, and one could physically see the definite change in the very stance, posture and eyes of the participants. His questions and their answers made them aware of the sameness of our human experiences, and the gentle awakening as he turned around their perception initially left them dazed.

The 20th morning saw members of the group running in at 07:30 am, trying not to miss a single moment. By the afternoon and certainly by the evening, there was a change. Something had been brought alive within them, slowly, subtly, and they were addressing that within themselves. There were many questions to Sadhguru - questions as revealing as the answers, questions that come up when you suddenly realize you can ask an enlightened Master who can relate to the seeming simplicity of each query, however small it may seem and understand the depth of where it comes from and facilitate the way out.

The final day was intense - Sadhguru took the group deeply into the details of the program and its practice. This initiation has the potential to be the beginning of whole new journey for each one of them, and the hall seemed to vibrate with the indescribable quality of this journey.

At the end, the participants lingered. "I don't really want to go home tonight. Can I do something to help wind up?" "When is the next Sathsang? Where can we meet?" "Can I register for the next program? How long do I have to practice to go with Sadhguru to Kailash?" "I want my wife/husband/child to do the program. What should I do?" The questions were now pouring out. CDs and Books had been bought, information was sought, and many just wanted to be with other meditators. They finally went home to continue their lives, blessed now with an opportunity for a new outlook, with the gift of a practice and the beginning of a new conversation with themselves and the world.