Animals, Plants & Mother Earth Are Taking Charge While We Lockdown!

The COVID pandemic is an unprecedented crisis. But as human activity retreats, nature and its denizens are roaring back to life! Read on to find out how Mother Earth is taking charge once again and perhaps reminding us to reflect and course correct.

“I’m sure Mother Earth experiences human beings as a virus – a very virulent virus!” These were Sadhguru’s hard-hitting words in a recent interview on the London Real podcast. A hard pill to swallow, but one cannot help wonder: Is COVID-19 inadvertently schooling us on how to treat the planet better?

Amidst the corona virus pandemic, which emerged in China in December of last year (already 4 months!), many countries implemented lockdown measures in hopes of slowing down the curve of infections.

This has also had the inadvertent effect of giving the planet a much-needed breather. For centuries, humans have carried out activity, ignorant of or uncaring about the detrimental impact on their surroundings. Sadhguru once said, “The human footprint has become so very big, there is no room for other creatures to live.”

But now, as more than one-third of the world is cautioned to remain home, in just 3 weeks of human inactivity, many stories of the planet’s other inhabitants have surfaced, showing us how immensely beneficial this break has been, not just for the animals but also for Mother Earth.

From animals like peacocks, flamingos and dolphins making more frequent appearances in Mumbai and its coast, to the ozone layer and rivers clearing up, there is much to account for.

Major rivers in India like Ganga and Cauvery have reported dramatic improvements in purity. The government has even stated that Ganga’s water in Hardwar is fit to drink – something that has been unimaginable for decades now!

With almost no cars on the roads, Delhi’s harmful air pollutants in the PM 2.5 category plunged by 71% in the first week of the lockdown. 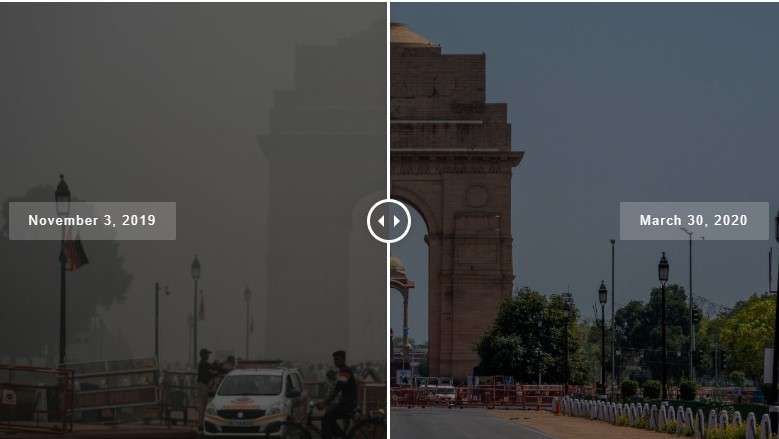 Over in Jalandhar, for the first time in 3 decades, people could catch a glimpse of the Himalayan peaks thanks to clearer skies.

Abroad, many stories tell the same tale. In Venice, the water canals have cleared up allowing sea life to indulge.

Pollution in New York has reduced dramatically and Los Angeles, the city of smoke (or is it angels?), finally has clearer skies (the angels must be happy!).

Worldwide, low demand for coal and oil have caused an overall 6% dropdown in global emissions.

So, should we stay at home forever? Though this would not be a sustainable, long-term solution, these positive outcomes show us that a pollution-free earth is indeed possible. This crisis has presented us with an opportunity to not only take a look at ourselves but to identify how we will choose to walk on this planet going forward.

As Sadhguru stated: “The very soil that you walk upon is also the body that is so valuable to you. If this is realized every moment of our life, we would definitely tread much more gently upon this planet, not because of some ecological sciences but just simply as life, it would be natural for us to do that.”

In the meantime, we should seriously consider Sadhguru’s radical advice on how “humanity should take a 3-week break every year from polluting technologies – all machines off. If everyone uses this time to upgrade themselves physically, mentally, emotionally, and in terms of their competence by even 10%, we would be living in a fantastic world.” Just imagine!

Editor’s Note: Help us provide medical care and other vital support to local vulnerable communities during this crisis. Donate for Corona relief.