The Complete What, Why & How of Agroforestry

Agroforestry opens up new possibilities for farmers to earn well while also repairing and restoring unhealthy ecosystems. Read on to see how agroforestry puts money in the farmer’s pocket and how everyone can benefit from its positive environmental impact.

Agroforestry is the practice of planting trees in farmlands alongside conventional crops. Besides being very lucrative for the farmer, agroforestry has multiple other benefits. It re-establishes the ecological balance in farm lands, prevents soil erosion and water run-off, provides alternate income options, and mitigates local weather extremes.

Where it is implemented properly, agroforestry shows remarkable results. It is not uncommon to find farmers who have benefited from these schemes, converting their entire farmland into an “agroforest”. Such farms are often a multi-level mixture of ecosystems, with tall trees, sinuous creepers, medium-sized shrubs and herbs at ground-level, existing in symbiosis. 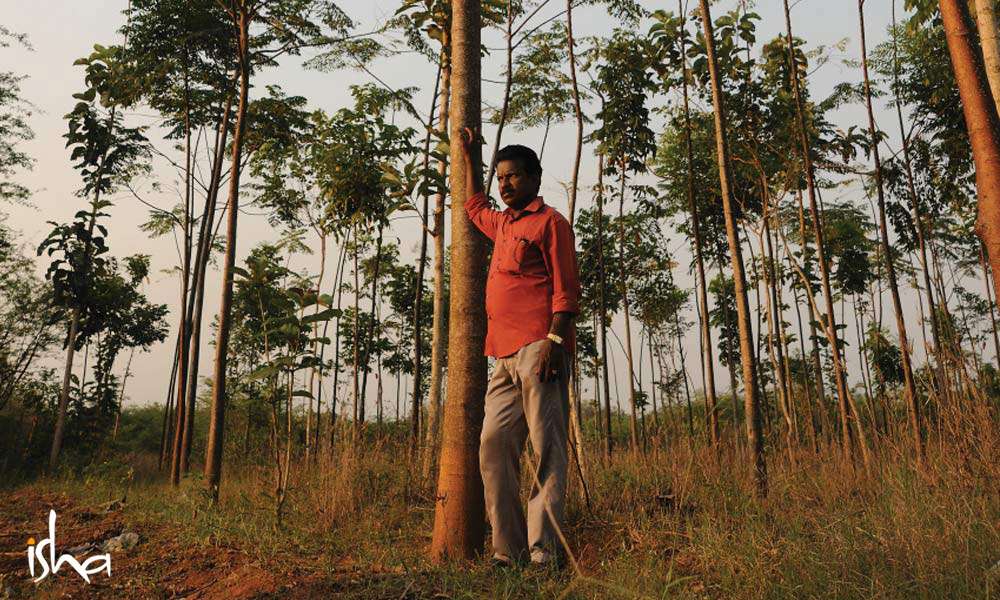 Agroforestry: Money Does Grow on Trees!

When trees are present on the farm, the farmer reaps many benefits, one of which is that he makes more money. In traditional agricultural models, the farmer often falls into a debt cycle. For example, a farmer might take out a loan to buy pesticides, fertilizer and seeds, but the monsoon may not come and a drought or a flood may destroy his crop. Then, he has no food to feed himself and no money to repay the loan. Sometimes, even if he gets a good yield, the farmer can suffer because of a glut in the market that will drive down the price.

70% of Indian villagers work on the farm. They suffer such situations on a daily basis. No wonder almost 300,000 farmers have committed suicide in the last twenty years.

But agroforestry is very economically appealing for the farmer. The reason is the demand for timber in India and abroad. Timber is used everywhere including firewood, furniture, scaffoldings, pulp, paper, floorings, cabins, musical instruments, sports equipment, etc.

But India does not have sufficient timber production and a severe shortage is expected as early as 2020. Nearly 25% of the over ₹70,000 crores worth of wood used in India is imported, while India’s timber exports value at just a tenth of that. This leaves a large market to be tapped in timber both nationally and internationally. With the rise in living standards in India, the need for wood is only growing. Some farmers are already profiting from this demand.

Senthilkumar, a farmer from Gobichettipalayam in Tamil Nadu is one such agroforestry pioneer. “I have planted Malabar Kino on the periphery of my farm. When I need some money I cut down 10 of them to get ₹50,000,” he explains. “I need not run around the bankers or take a loan hoping for a government waiver. In the long run, say 30 years from now, for my grandson's education, for example, I could sell ten red sandalwood trees to get ₹300,000.”

To keep the farm income constant and nearly uniform over the years, long-term and short-term trees are planted together in an alternating pattern. Short-term trees such as Malabar Kino, Melia Dubia are harvested in five years. Long-term trees can be harvested starting from the tenth year for a much higher price. These include valuable trees like Teak, Mahogany and Red Sandalwood. These long-term trees can be seen more as an insurance policy or as a retirement plan (without a premium to pay).

Kanagaraj, a farmer in Thanjavur, Tamil Nadu, explains how his trees are an insurance for his daughter. “My daughter is five now. In twenty years she will be getting married. Then the trees will also be mature twenty-year-olds. I can sell the trees to meet the requirements of the marriage. I need not ask anyone for money, I am independent with agroforestry.”

These long-term trees can also indirectly generate a lot of income through the cultivation of creepers on them. Pepper vines are one such species. Once the trees are at least three years old, pepper vines can be grown around them. These vines are harvestable two years later. The income keeps increasing as the vine matures. In the initial years, when the trees are still too small to harvest, income can be earned from inter-cropping with year-round crops like banana, papaya, etc. or with seasonal crops like black gram and groundnut.

Isha has a lot of experience working with farmers and helping them move to agroforestry. Till date, nearly 70,000 farmers have taken that step with Isha’s help. Farmers are conservative and with good reason. For them to take up an idea, they should see it working. Isha has meticulously developed, over the course of the last fifteen years, a network of farmers thriving on agroforestry. Some of these farms are designated model farms, with mature agroforestry working models that are a source of inspiration to new farmers.

With this experience and expertise in agroforestry, a detailed study has been conducted regarding the feasibility and profitability of it in various region. This very comprehensive study includes the species of trees that can be planted short-term and long-term, the current and expected future prices, the crops that can be grown in between the trees, the creepers that can go on the trees, etc. Various agroforestry models (with different sets of species) are available for different soil types, climatic conditions and water availability.

With estimates of prices, costs and survival rates projected over twenty years, the study has concluded that farmers can increase their income anywhere between 300 to 800 percent in five to seven years. This estimate matches the experience of the early farmers who have converted to agroforestry. With Isha's assistance in the form of free education into scientific methods of agroforestry, saplings, free farm visits and advice, this dream has become a reality for many farmers.

A common problem that many parts of the country encounter today are drought during the summer, followed by floods during the monsoon a few months later. For example, in May 2016, the Ganga was so dry at Prayag, Uttar Pradesh that people were walking across the river bed. Just three months later, the river’s monsoon floods touched record levels in Bihar and Uttar Pradesh, affecting 4 million and displacing 650,000 people from their homes. In 2015, Tamil Nadu suffered some of its worst floods in December 2015. Five hundred people lost their lives. Estimates of the damage ranged from INR 20,000-160,000 crores. A year later in the summer of 2017, Tamil Nadu faced drought – its worst in 140 years.

One might be tempted to think this is just the way of things: rivers flood during the monsoon and go dry in summer. But this is not true. The reason for cyclical floods and droughts in that vegetation has been removed in most of the river basin’s area. For example, 87% of tree cover in Cauvery basin has been removed.

Trees present in the river's catchment area slowdown the river runoff and retard seasonal flooding. They help soil absorb rainwater which recharges groundwater aquifers. Some of this water is slowly released from the soil into rivers over the course of the year. This prevents floods and also dry season water scarcity and helps revive rivers. As the farms are not ravaged by the floods in the monsoon and as water is available in the dry season, farmer distress from water – or lack of it – is mitigated.

Soil is not dirt. Fertile soil is a complex living, thriving ecosystem that has been built up over thousands of years. In fact, science knows very little about soil. Centuries ago, Leonardo Da Vinci is supposed to have said: “We know more about the movement of celestial bodies than about the soil underfoot.” That still holds true today. There can be 10,000 to 50,000 species in less than a teaspoon of soil. In that same teaspoon of soil, there are more microbes than there are people on the earth. In a handful of healthy soil, there is more biodiversity in just the bacterial community than is found in all the animals of the Amazon basin.

The organic matter from the tree in the form of fallen leaves, stems, bark, flowers, etc. and that from the animals in the form of dung, both nourish the soil. When there are lots of trees, the organic content in the soil is increased, which in turn increases its ability to retain moisture, and improves the soil fertility, translating into better crop yields.

In addition to the long list of local and immediate benefits, agroforestry has far reaching impacts on a global scale. Increased green cover helps reduce greenhouse gases, reverse global warming and stall sea level rise. It purifies the air by absorbing carbon dioxide and pollutants. It replenishes the deep aquifers over the centuries and even millennia. With agroforestry, the farmer lives as a harmonious note in the eternal music that is nature.

When a farmer hears about agroforestry from the Cauvery Calling campaign, he can call 80009 80009 for more information. A volunteer registers him into the campaign database, and the farmer is invited to a district-level meeting for interested farmers.

At this meeting, farmers are introduced to agroforestry in much more detail. In attendance are key people including representative officers from the forest department and timber merchants. The farmer can learn first-hand about the ins-and-outs of growing and selling timber.

Once a farmer decides to switch a part of his farm to agroforestry, a field volunteer goes to his land to perform soil and water tests, to judge what species do well for his particular setting. Once the farmer digs the pits, he can get saplings and one year’s worth of manure from Cauvery Calling’s support volunteers. The cost for this – averaging ₹42 – comes from crowd-sourced donations through the Cauvery Calling campaign.

To ensure that the farmer's conversion to agroforestry is a success, Cauvery Calling follows up with field visits for the first year. Failed saplings are replaced free of cost, up to 10% of the original number.

Deeply appreciate the support & commitment of Chief Minister and Government of Karnataka for their support to #CauveryCalling. Their decision to incentivize Agroforestry in the state will go a long way in ensuring wellbeing of farmers & Mother Cauvery. -Sg @CMofKarnataka @BSYBJP pic.twitter.com/LBHk2uDIEz