The Mahabharat program is just around the corner, with only eight days left before Sadhguru unfolds the intricacies of this timeless saga. Mahabharat will be a truly breathtaking explosion of arts, culture, and beauty - a celebration of life’s exuberance and depth. As a prelude to the program, Sadhguru narrates an incident from the epic, which ultimately decided the outcome of the legendary battle.

One of many stories from Mahabharat that showcase Krishna's intelligence and playful mischievousness, this story relates a situation when Krishna was approached to become an ally, by both Duryodhana and Arjuna, as they were building up great armies before the battle at Kurukshetra. Duryodhana's attitude and choice cost him dearly, though he doesn't immediately realize his folly.

Sadhguru: There is a beautiful situation or incident that occurred in the Mahabharat. The Kurukshetra war is imminent and these two parties are going about campaigning. At that time there were only two fronts - the Kauravas and the Pandavas. They are trying to gather all the support they can because they are going to war and every man matters. You would like to have the maximum numbers because it's life and death, it's not an election. They’re going from kingdom to kingdom campaigning and both of them have acquired formidable armies behind them. 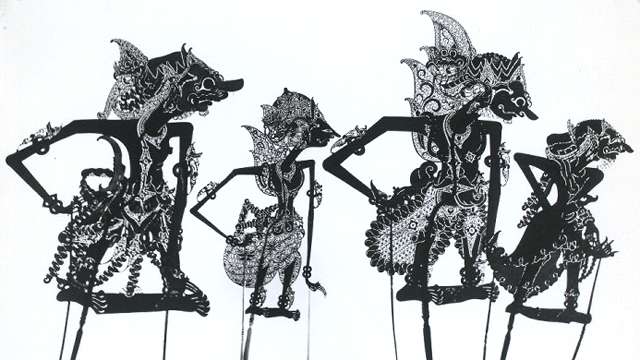 Puppets from a Wayang beber play depicting the Mahabharata in Indonesia. From right: Drona, Duryodhana, Karna and Dushasana.

Krishna is not a king, but he has a well trained army with over 10,000 men, who have been in many campaigns - a great asset. So in the afternoon Krishna is pretending to sleep. He is like that - he is pretending to sleep because when you know what is the next step and you still don’t want to disturb the game, a certain amount of pretension is needed. So he is pretending to sleep, stretched out on his bed. Duryodhana, the eldest of the Kauravas came, walked into this room and saw Krishna was sleeping. He sat down, wanting to wait. Krishna was just sleeping with a gentle smile on his face. His feet were pointed towards Duryodhana. Duryodhana looked at it and he didn’t like it. “He is not even a king; he is a cowherd. I am a great emperor. Why am I sitting at his feet?” So slowly he got up and came and sat close to his head. Then Arjuna came, a devotee of Krishna, and sat where Duryodhana had sat earlier. Krishna’s feet were pointing at him, he sees that as a blessing. So he sat there. Krishna opened his eyes after sometime, pretending to wake up. See this is the problem. Once you pretend to sleep you have to pretend to wake up. One act leads to many complex acts.

So he pretended to wake up, opened his eyes, and said, “Oh, Arjuna you have come.” Arjuna said, “Yes Bhagwan, I have come.” Before they could talk further Duryodhana cleared his throat to make his presence felt. Krishna said, ”Oh Duryodhana, even you? Both of you at the same time - what brings both of you here?” He knows the whole act.

Then both of them said that they have come to ask for his help in the war. Krishna said, “Both of you have come and both of you are asking for the same thing, so let me put it this way. One of you can have my army, another can have me. But I won't fight, I’ll just come with you. Because my vision fell upon Arjuna first, he gets the first choice.” Duryodhana protested, “I came here first!” Krishna said, “But what can I do? I saw him first.”

Then Krishna told Arjuna , “You choose what you want.” Arjuna said, “Bhagwan we want you, I don’t care about the army. We just want you with us.” Krishna warned, “I am not going to fight for you. I’ll just come with you.” He said, “You don’t have to do anything, we just want you with us.” Then Duryodhana let out a sigh of relief – he was so happy! He knew the Pandavas were idiots, but he never thought they were such idiots, that they will choose one man against 10,000 trained men. And this one man is not going to fight. Just going to come with you, drive with you. 10,000 trained men against one man who is not going to fight - what a foolish choice. But that choice made all the difference. That choice made all the difference for what happened to the result of the war.

Editor's Note: Watch the Leela series, where Sadhguru explores the life and path of Krishna.

Images courtesy: Mahabharata Duryodhana in Dwaraka by william2021
Heroes of the left realm, the Korawa, and an ally from NYPL

Divine
Mahabharat
Krishna
Related Content
article
Mahabharat Episode 73: The King and the Nagas: A Story of Retribution and Revenge
Krishna and the Pandavas have passed on and the new generation of Kshatriyas inhabits Hastinapur with Arjuna’s grandson as their king. But the shadow of the past still looms over the words and deeds of today as Arjuna’s feud with the Nagas continues through his progeny. Will the violence go on forever? Who will break the vicious cycle of revenge? Will there ever be peace?
Dec 25, 2021
article
Mahabharat Episode 72: Heaven or Hell? Yudhishthira Makes an Unusual Choice
After ruling their kingdom for 36 years, the Pandavas relinquished the throne and went for a pilgrimage to Mount Sumeru. On the way, Draupadi, Nakula, Sahadeva, Bhima, and Arjuna all fell to their death while only Yudhishthira made it to Devaloka, where he discovers that a dog has been accompanying him all the way from Hastinapur! The story continues…
Nov 9, 2021
article
Mahabharat Episode 71: What Happened to Draupadi and the Pandavas After the Kurukshetra War?
What happened to Draupadi and the Pandavas after they won the Kurukshetra war? Who was the only Pandava considered worthy of reaching Devaloka (abode of the gods) in his physical body, and how did the others die? Sadhguru answers all these questions and more.
Oct 5, 2021
Close