The Making of Alai

When we look back at everything that happened during those 6 weeks, it just seems unbelievable. With Isha, life is always on the fast-track, and undoubtedly the making of this CD was no exception! In early January we had decided it was high time to create a Sounds of Isha album featuring a variety of Tamil songs that would not only appeal to meditators but would be a means of introducing Isha to people through music.

We sat down and planned for the CD to be released on Mahashivarathri.  Right from the conception of the songs, through the whole process of track-by-track recording, editing and mixing, we worked together as a team with a single focus.

There were times we needed one SOI member to be on full-time outside duty just to shoo the birds away.

The songs were slowly taking shape but we were getting behind schedule. We worked diligently despite the distractions of unforeseen urgent musical requests – darshan music, live music for Sadhguru's talks and dinners, concerts, trips to Coimbatore and Chennai, and even a jingle for the NoMos mosquito repellent launch!  Recording times were stretching beyond what was expected with all varieties of sounds leaking into the recordings in our extremely basic recording studio – the exuberant birds chirping incessantly, the boisterous crows, the occasional grunt of a cow, trucks and construction noise, and the Isha Home School children heading towards dining! There were times we needed one SOI member to be on full-time outside duty just to shoo the birds away.

Meanwhile, the CD cover was in the making; we had received the title from Sadhguru – “Alai” (meaning “wave”), which seemed perfect for spreading the Wave of Bliss through music. The cover photo shoot was another memorable experience. Over 15 musicians piled into a small decorative boat anchored in a pond, instruments and drums in our hands, almost tripping over each other as we attempted various crazy poses for the camera team. It was a moment of bonding and lots of laughter as we let our creativity loose after too much “serious recording.” 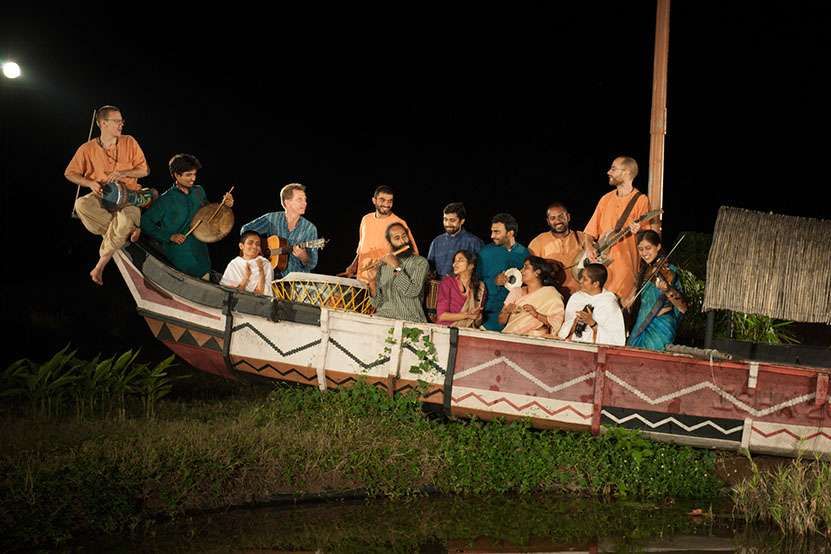 The songs were taking shape, but time was quickly ticking away with barely two weeks to go. We realized we had to step back from the songs that were in our ears night and day, and listen with fresh ears, so we called a few people outside the music team to listen to our creations. We knew this would open the forum for discussion but we didn’t foresee the Pandora’s box that was about to open. This turned out to be a fundamental turning point – the feedback was pointing us in a different direction. Confusion brewed as we debated how much to stick with our original ideas or make the suggested changes. This boiled up to a point where we finally agreed on one thing - we needed to get some guidance from Sadhguru himself.

The opportunity came to present the songs to Sadhguru for feedback. A sigh of relief ­­– we were heading in the right direction, but the songs were still lacking in a few areas. His insight and guidance were so valuable and gave us the necessary fuel to push through the next week. Through all the joy and turmoil, we were beginning to realize how amazing this whole process was – this was more than just preparing a Tamil CD. This was a valuable experience where each one of us was pushed beyond our limitations, past our likes and dislikes, and ultimately, towards our growth.

The recorded songs were slowly solidifying, but one song was in need of a major makeover – Alai Alai – the namesake of the album. It needed more of a live feel. So in barely 24 hours, a mass recording was arranged in Adiyogi Alayam with all the residents and volunteers. With none of us knowing how to organize a mass recording or what was really needed, somehow the whole session just materialized before our eyes and it seems something just took over – 100 people learning “Alai Alai” lyrics, singing, shouting and dancing around the microphones. It was so wonderful to see the enthusiasm of everyone in the hall, not caring about the perfection of the performance, but just having a good time.

Those last few days became like one long day interspersed with naps and sparse practices and food for only some of us.

The chorus portions were selected overnight and incorporated into the song which became our focus for the next few days which were intensifying as the deadline drew close.

Those last few days became like one long day interspersed with naps and sparse practices and food for only some of us. We were swimming in a sea of sounds – the shore emerging and disappearing until finally after one full 24+hr session where we all sat together, the Alai project finally came to a culmination and was submitted for mastering and printing! And somehow this just felt like the beginning of something far larger than us…

This was unlike any other CD we’ve done before – the instrumentation was much more complex and this time we were all fully involved, full time, day and night and going through the nitty gritty details together. Something was carrying us all through for sure! We were learning so much in the process – about music, about the technical aspects, and about working together. Seeing the dedication of all of the volunteers was inspiring, just putting themselves into it with a single-track focus.

At times we thought this is absolutely crazy! But something within us knew that this was going to work – we were all giving ourselves fully into it, and Sadhguru’s Grace would be there. We hope these songs are enjoyable, not only for the sake of our musical fulfillment, but we hope these songs spread out like a wave and allow the wave of bliss to take over! Alai alai alai alai…

Support Isha Foundation and our social projects by purchasing the album “Alai – Wave of Bliss.” You decide the price!
Looking for more Alai songs? Check out our Alai Series.