Giving It Your All – Sports Day at Isha Home School

What inspired several hundred children to come together under the banners of India’s ancient empires and give it their all to win glory for their teams? Read on to find out…

As a part of the Sports Day celebrations at Isha Home School, the students were divided into four sports houses – Chola, Maratha, Kakatiya and Hoysala – each named after a historic empire of the Deccan Plateau. Given by Sadhguru, these names reflect the rich cultural heritage of southern India. 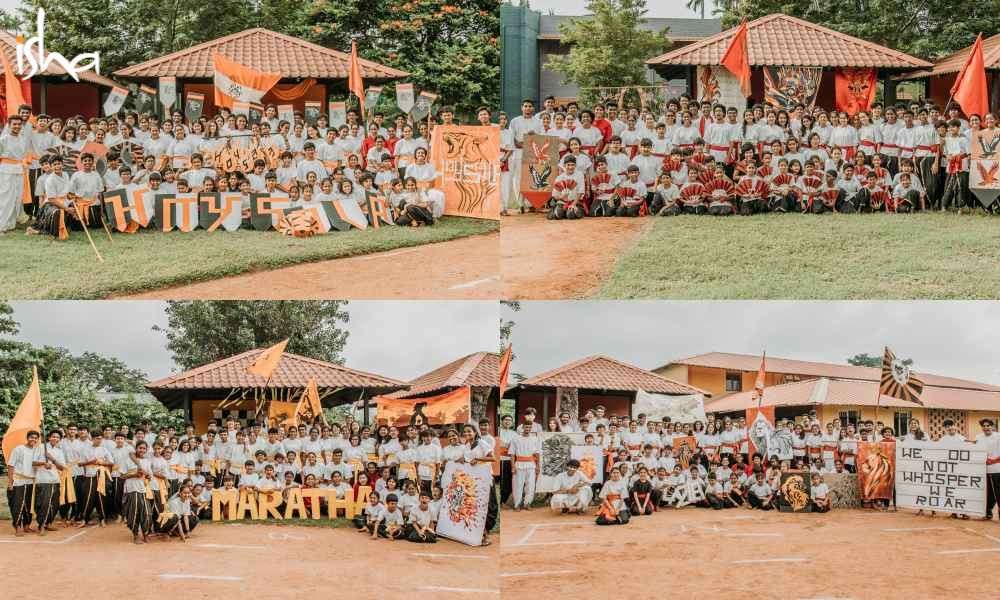 The students then competed in various events leading up to this culminating day. These events included team games such as volleyball, football, kho-kho, dodgeball, tennis, badminton, basketball, swimming, table tennis and various individual athletic events. The scores leading up to sports day were very close, and there were nearly 300 points up for grabs, giving every team a chance to win the coveted trophy.

The students had the good fortune of having Sadhguru join them for this momentous occasion.

The day began with the hoisting of the national flag followed by the torch ceremony.

The students then assembled on the sports grounds dressed in kurta and panchakacham ready to start a unique march past, designed by Sadhguru, which is reminiscent of the battles between the great empires of yore. This was followed by the school song, which was written by Sadhguru as well.

During the competitions it was truly an inspiration to watch everyone, from the oldest to the youngest, participate with such zest and zeal. Our chief guest, Air Vice Marshal Shri Anil Tiwari, crowned the winners and congratulated them on their efforts.

Sadhguru then addressed the gathering, where he spoke about the value of creating an educational environment where students and teachers are encouraged to give it their all.

Later in the day, each team had the opportunity to present a cultural ensemble that consisted of music, dance, cheers, slogans and props – all of which were created solely by them.

This was followed by the much-awaited basketball match between Hoysala/Maratha and Chola/Kakatiya. With the scores being so close, each team was determined to win this important game.

The Hoysala/Maratha team took the lead instantly with some good shots and excellent rebounds.

The Chola/Kakatiya team tried hard to narrow the lead and catch up, but they were no match for the consistent Hoysala/Maratha team.

In the end, Hoysala/Maratha won the match, earning their teams a well-deserved 36 points.

The students then participated in various events throughout the day. These included track races, fun games such as the lemon and spoon race, the much-anticipated student vs alumni volleyball match (which the alumni students won for the first time!), and the extremely popular parent volleyball and throwball matches.

In the end, the Hoysala team held on to their nerves and defended their title, taking home the trophy for the second consecutive year.

The day concluded with a silent march past where the senior students passed the torch to their juniors, symbolically handing over the leadership and responsibilities of the school.

There were tears and smiles all around as the students rejoiced in the knowledge that the battle had been one well-fought!