On May 13th, San Francisco witnessed a lively discussion between Sadhguru and Paul Hawken on “Socially Conscious Business.”

On May 13th, the Commonwealth Club of California auditorium on Market St., San Francisco witnessed a lively discussion between Sadhguru and Paul Hawken, environmentalist, entrepreneur and author. Titled “Socially Conscious Business,” the discussion was opened by Paul who described what socially conscious business is. “Modern business is about speed and growth, not human wellbeing…. As a result, business is destroying its host (the planet)…. To remedy this, businesses have to refocus on the triple bottom line of ‘people, planet and profit’, not just profit alone…. One way to change this is to make businesses and banks local.”

Sadhguru responded with, “Business and wealth have been internationalized like never before. The way technology is progressing, it is inevitable that Bangalore and the Bay Area will soon feel like adjacent neighborhoods, despite being on opposite sides of the planet…. All businesses are about human wellbeing, which is also my business as a spiritual leader…. People are a lot richer now than a century ago, but not any happier, perhaps even less happier than before… If people realize that happiness comes from within, they will stop pursuing happiness in external objects through compulsive actions.” 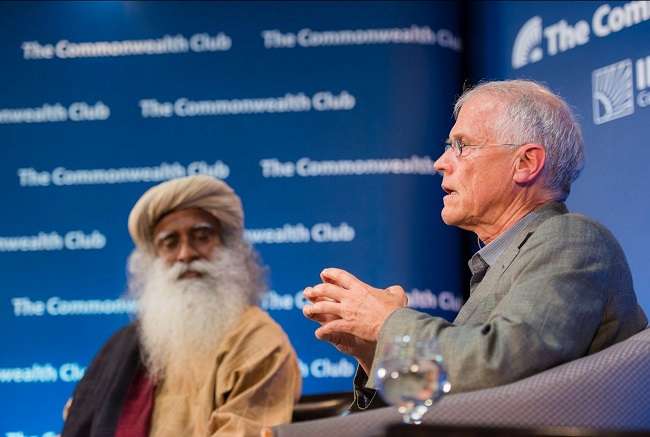 After about thirty minutes of discussion, Sadhguru and Paul responded to questions from the audience with some wise and humorous answers. In the end, the host of the discussion asked the speakers to state in under a minute, their ideas for saving the world. Sadhguru explained that nurturing meditativeness in leaders around the world will lead to a more peaceful and socially conscious society. Paul said that his practice is not to change the world, instead to learn from it.

Happiness
Business
Related Content
article
Davos 2020 - Sadhguru at World Economic Forum - Bringing Meditation and Consciousness
Leading voices from around the globe, including conservationist Jane Goodall, Salesforce CEO Marc Benioff, and the President of Colombia, Iván Duque, took the stage with Sadhguru to pitch strongly for unified action to address climate change.
Jan 21, 2020
Loading...
Loading...
article
6 Reasons to Attend the “Human Is NOT a Resource” Leadership Conclave
Crafted by Sadhguru and delivered by industry experts, this novel initiative is designed based on a study of about 1500 CEOs and CXO, conducted over the last seven years.
Jun 2, 2019
Loading...
Loading...
article
How I Discovered the Joy of Being Human
At the prime age of 33, seemingly at the top of his game, Paul Marais of Johannesburg, South Africa, was slowly sinking. This is his story of turnaround and transformation.
May 11, 2019
Loading...
Loading...
Close