Days Full of Life - Sathsang with Sadhguru at the IIIS, USA

Over 500 people filled the Mahima dome at the Isha Institute of Inner Sciences on Monday, June 16th, for the one-day “In the Presence of the Master” Sathsang with Sadhguru.

Over 500 people filled the Mahima dome at the Isha Institute of Inner Sciences on Monday, June 16th, for the one-day “In the Presence of the Master” Sathsang with Sadhguru. Many were recent participants and volunteers of the weekend’s Bhava Spandana Program, also conducted by Sadhguru, and some made the journey just for the day. All those in attendance were able to walk on the newly poured concrete floor in Mahima – a welcome addition that was completed just in time for the BSP. All of the necessary work was done by hand, by volunteers, to avoid having heavy machinery inside the consecrated space. The dome is already a focal point of IIIS – “Walking into Mahima for the first time I felt completely looked after,” shared one participant. 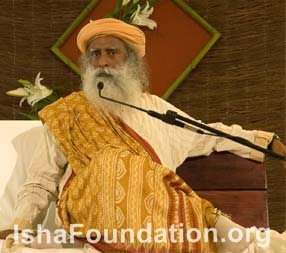 The Sathsang began Monday morning shortly after practices, when Sadhguru met everyone inside the hall. He immediately started a powerful meditation that lasted a sizeable chunk of the morning. One participant shared that she went from “floating… to diving into a chasm… I felt I could disappear. It was very powerful.” Another meditator said that the meditation felt “very real. I felt like I was expanding and including the whole world in me.” And another meditator shared her experience of “feeling my body dissolve… I looked below and saw only empty space; I looked above and saw the same. There was no body dancing, but the drums, the violin, and guitar sounds were all emanating from within me – and yet I was dancing within them. There were no boundaries.”

Afterwards, Sadhguru noted dryly that more meditation might be too much for all those who had just attended BSP for the first time, so after a hearty breakfast al fresco, the group went out into the clear Tennessee mountain sunshine for a hike to the waterfall and the bluff – quite an experience for those who had never seen these gorgeous spots before. Invigorated from the activity, all gathered in Mahima once again for “four hours of the best logic I’ve ever heard,” as one participant put it. Sadhguru fielded a question that turned into a discussion of the American and international political situation, raising an eyebrow at the end of his commentary and querying how his popularity was now that he’d spoken out about these things, jabbing his thumb downwards in half-jest. And yet, one participant said she’d like to see Sadhguru meet with politicians because his insights were so profound, and “he has the ability to help turn this country in the right direction.”

Sadhguru answered question after question, and several participants noted that although they never raised their hands, he still managed to answer all of their own queries and concerns. He went into answers at length, covering such topics as relationships and commitment, the mind/body connection to disease, and how to help family members who have lost one of their own. He turned a question about his returning for another life into a challenge, pointing out that the question implied wasting our current life, and asking instead what our commitment was and what we were going to do now. He then followed up a question about consecration by speaking about possible plans for additional types of consecrations, whose effects could ripple throughout the world.

Many meditators decided to stay overnight, not only to bask in the remainder of the day but because Sadhguru announced his plans to stay at IIIS for several more days. All were invited to remain at the center to be in Sadhguru’s company, and participants who were able to alter their plans to stay, did so. The next day was filled with the many tasks required as a follow-up to the largest BSP yet thanks to the opportunity known as “Sleeping in the Lap of the Master.” This offering allowed interested participants and volunteers to sleep inside Mahima – allowing people to benefit from the powerful energy of this space even while asleep. Many took advantage of the opportunity, which also allowed for a greater total number of participants, and many noted the special qualities of Mahima-influenced rest. “I felt no sense of time inside the dome, but no matter how few hours I slept, I felt totally rested,” said one participant, who also commented on the warm, nourishing energy of the space. Another shared that although she usually has problems falling asleep surrounded by other people, here, she fell right into a deep, peaceful sleep.

Just as the sun was setting that next night, Sadhguru walked out into the area in front of the lodges, and as word spread, devotees began to quietly dot the area as well. Walking casually through the trees, Sadhguru came to a stop as volunteers laid down carpets and set up a wooden chair with telltale white pillows – after which he graciously acquiesced to the not-so-subtle request for a Sathsang by sitting down to join all present. Delighted to be with him in a more intimate and informal manner, those seated began to engage him in a dialogue that began with questions about Kailash, but turned into a lengthy discussion about the state of Tibet and its people. As the sun sank, bathing questioners in a red glow, Sadhguru answered questions about dropping one’s ego, true love, and living on the edge. Finally, after darkness had engulfed the gathering, Sadhguru broke the group for dinner, although most felt already fed by his words and presence.

The following day dawned sunny and warm again, and volunteers managed to find the time to play a vigorous game of volleyball late in the afternoon. Eagerly awaiting another chance to see Sadhguru, meditators were rewarded after dinner by Sadhguru joining the group again and requesting a bonfire. Wanting to keep the gathering on a more lighthearted note, Sadhguru deftly fielded a few casual questions, but soon requested music from the circle of faces. Several meditators responded with heartfelt songs and then upon Sadhguru’s encouragement, guitars and more songs of love and longing filled the air around the crackling flames until finally, Sadhguru gently suggested it was time for sleep.

No matter how many days participants were able to stay, the Sathsang seemed to offer support in a variety of ways, providing some with a needed “kick in the butt,” a reminder to “really live life,” or a “boost of energies.” One meditator said it was the most powerful Sathsang he’d attended, and that it touched him as no other Sathsang had. Others left with new goals and new directions. One participant shared a more global observation, noting that the community of meditators is truly becoming international, a melting pot of accents, languages, backgrounds, races, and social classes. “It truly feels inclusive,” she said. “Everyone feels welcome and invited. Being together, working, sharing, and all seeking something – it’s beautiful. Watching people laughing at dinner, I felt the warmth of one, big family.”

The Webstream of this talk is now available, register and watch now.