Sadhguru talks about Isha Samskriti, and how the children will grow up with phenomenal discipline and strength within.

ArticleSep 19, 2016
Sadhguru talks about Isha Samskriti, and how the children will grow up with phenomenal discipline and strength within.

Sadhguru: Samskriti means to do life in an exuberant and equanimous way. This is the whole issue with most human beings – if they are equanimous, there is no exuberance in them. If they are exuberant, they are falling apart. If you know how to be equanimous and exuberant at the same time, there will be no fear. Whatever situation you may face, life will always be beautiful. Once there is exuberance and equanimity in you, your destiny will not be ruled by what happens around you, but only by what happens within you.

Samskriti is about growing a human being to his or her full physical and psychological potential, without the intention that the child should become a doctor, an engineer, or whatever else. Parents are always concerned about what their children will do for a living. If they are at their full potential, earning a living will not be an issue. When an earthworm can earn its living, human beings, who are supposed to be the peak of evolution on this planet, need not worry about earning a living if their body and mind are developed to their fullest capability.

In Samskriti, we achieve this by using classical arts – music, dance, martial practices, yoga, and Sanskrit – as well as English as a passport for them, wherever they go. Unlike modern arts that people create out of some freaky instinct or for entertainment, these are consciously evolved arts that come from a deep understanding of the human system and the science of how to evolve it to its highest potential.

The Ideal Time to Start

The children come to us between the ages of six and eight, which is the ideal time – they are most receptive. When the varnashrama dharma was practiced, 0 to 12 years of age was balavastha , 12 to 24 years of age was brahmacharya . In this context, people often assume that there is a guru-shishya relationship, which is a misunderstanding. Gurus never hold relationships of any kind with their shishyas. You could compare the role of the Guru to the role of the sun in your life. It lights up and makes you see everything, and that is all.

Obviously, in the past, people have set up similar education systems as we do now, but Samskriti is not about reflecting tradition. I do not want people to be identified with the tradition – that again would be a restriction. This is about scientifically looking at how the human body and mind work, seeing what kind of activity would be best for them to blossom to their fullest, and doing that. What was done in the past was also an outcome of how the human system is made.

Every child would love this system of education. It is not a question of fitting in – a child need not fit into anything. Each one has to blossom according to his or her own nature. This does not mean doing whatever freaky things one feels like doing, which is a modern idea. Today, we equate individual compulsions with freedom. Samskriti, in contrast, is a type of education where all compulsions are ironed out so that, over a period of time, a child learns the beauty and the freedom of being conscious and being able to do what is needed.

Particularly in India, once the economy gains momentum and people are doing better financially, the demand for teachers and performers of classical arts will increase immensely. In fact, the demand is already there. Today, a reasonably good music teacher can earn more than a doctor. There is no need to worry about how they will earn a living. Some of them will become performers of music and dance – locally, nationally, and even internationally. Others will become teachers of music, dance, Kalaripayattu, Sanskrit, and yoga. Yoga teachers are in huge demand right now. And no other yoga teacher in the world will be so rooted in this science, because from the age of six, the Samskriti children are not just learning it, they are imbibing it from everything around them.

The type of yoga that they will deliver is a classical form, not a studio form, and the way they will transmit it is going to be phenomenally powerful, which cannot happen unless you are soaked in it. This not only applies to yoga but to all the other arts as well. You cannot learn Carnatic music, Bharatanatyam, Kalari, or the yogic sciences as a hobby on the side – you have to be absolutely immersed in them. 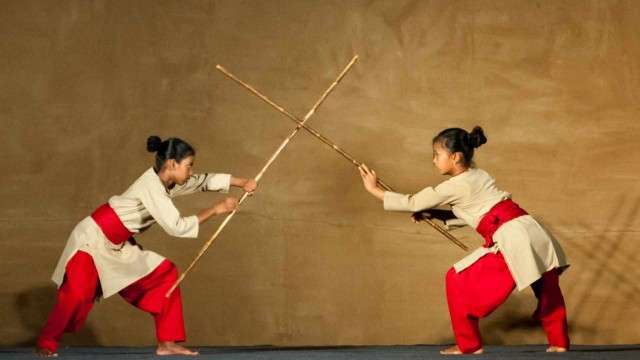 That is why we are trying to provide these children an atmosphere where they are immersed in these arts, all the time. Without that culture, without that atmosphere around them, they cannot develop this kind of quality. These arts demand a great amount of dedication and involvement. Whether it is classical music, dance, or Kalari – these disciplines are not about entertainment, fighting, social interaction, or grouping. All these aspects are served on the side, but the important thing is these are arts where not only to perform but even to just be able to appreciate them, you have to develop a certain profoundness of perception.

At the time in my life when I began to meditate for long hours and my perception deepened, I realized Indian classical music has such a profound impact on you. The music, dance, and other art forms that go out from Isha Samskriti are statements about the profoundness of life. We need to make a statement and a pitch for profoundness of life, because right now, the whole idea of modernity is a journey from profoundness to profaneness. Samskriti is an effort to reverse that.

Once the children go out into the world, they will make a subtle change wherever they go – just because of the phenomenal discipline and strength with which they have grown up. Anyone who grows up with that level of conscious discipline will go far. If physiologically and psychologically, they are truly mature, they will find their way in the world. We as an organization will support them in that too, and so will millions of volunteers across the world.

The children have really amazed me in many ways. For example, a few of the 15- to 18-year-olds were in the Inner Engineering teacher training. Among all the teacher trainees – mostly highly educated adults from across the world – the Samskriti children did best. They are already showing their mettle, but I do not want them to be put on an express pathway. If you become a full-grown tree, flowers and fruits will come. You do not have to try to extract them. These children will transform the world.

Editor’s Note: A version of this article was originally published in Isha Forest Flower September 2015. Download as PDF on a “name your price, no minimum” basis or subscribe to the print version.

EducationIsha Samskriti
Related Content
article
The Qualities of a Good Teacher
Sadhguru explains the qualities that a good teacher must possess, and the significance of a teacher in shaping the child.
Sep 3, 2020
article
Sadhguru’s Ideas For A Better Post-Pandemic World
Sadhguru shares his insights on how we can make the COVID-19 challenge into an opportunity to rejig the way the world works.
Jun 23, 2020
article
Quotes About Education by Sadhguru
Sadhguru never let schooling interfere with his education. Hence, behind his various educational initiatives, the emphasis has always been on inspiration, not indoctrination. It has never been about accumulating information but enhancing perception. Below are a few quotes he has shared on the subject.
Apr 30, 2020
Close