How You Can Help Consecrate the World

A participant of a recent Samyama program asked Sadhguru, “What can I, we, do to help you consecrate the world?” In his response, Sadhguru stresses the importance for human beings to live, work, and grow in energetically conducive spaces. He discloses some little-known facts about the toll taken on his physical body by consecrations such as the Dhyanalinga consecration almost twenty years ago. Outlining major upcoming projects and many more pending requests to consecrate spaces and energy forms, he emphasizes the urgent need to create a substantial group of people who could be trained to do such work. Read on to find out what it takes.

Sadhguru: It has taken thirty-six years of work to really get people interested in the science of consecration. Some of you have the Linga Bhairavi Yantra, a consecrated form, in your own homes. For many people who have taken Devi home, it is the biggest thing that has happened to them in their lives. But the Linga Bhairavi Avighna Yantras take three to four months to make. That is why we give them only twice a year. It takes an enormous amount of life investment.

Apart from that, there are at least a hundred requests right now for me to consecrate major projects – largely in India, some outside the country. These are not necessarily temples – for a lot of major real estate projects, they want energy centers.

Recently, I went from the US to India, just for one day, to speak at the inauguration of the new city of Amaravati that is going to be established in Andhra Pradesh. This is the first such project in India in recent years, where a completely new city is being built. Otherwise, most of our city structures are ancient. We have excavated sites – temples, ports, whole city structures – that are many thousands of years old.

But now this new city is being built in Andhra Pradesh. We have been working with the state government on various other projects, and we taught Inner Engineering for the Chief Minister, all the ministers, bureaucrats, and top officers in the state. We have also adopted over three thousand schools in Andhra Pradesh. Now, they set up a conference called Happy Cities Summit. They want to create not only a beautiful and technologically capable city, but a happy city. And they want a consecrated space in the heart of the new city.

Such requests are growing. If I do the requested one hundred consecrations in the next two years, I may live only for another three years. That is the kind of energy requirement it will take. Those of you who have been with me for over seventeen, eighteen years would have seen what happened to me after the Dhyanalinga consecration. And what most people do not know – after the Devi consecration eight years ago, I lost my sense of taste and smell for almost one and a half years. My tongue was like dead. Whatever I ate tasted like cotton. Generally, my sense of taste is very keen and vivid – I am very choosy about those things when I want to be.

Slowly, my sense of taste and smell came back. I had to do so many things to revive the system. We had built various support systems at that time, for a variety of reasons. Due to time, age, and various other circumstances, a lot of those structures are going away. We are building new energy structures to assist us. But definitely, as it is right now, we will not be able to fulfill these one hundred consecrations. And by the time we complete those consecrations, it will multiply into many hundreds. I have the energy, but I do not have the body to do that. This body is a fragile, newly built structure – it was almost gone at one time, after the Dhyanalinga consecration.

Learning to be an Instrument

We need people to stand up. Young people below thirty-five years of age – if you are interested, we want to train you to be able to do these things. But this kind of training needs a completely different dimension of involvement, dedication, keenness of purpose and discipline. When you play with your fundamental life energies, you must be super-disciplined. One small deviation and it will all go bad. Not just for you – for me. And we cannot let the work that you are doing go bad – someone else has to pitch in.

This work needs a group that is exclusively dedicated to this, one that works in a totally different dimension of life.

If you think you have the quality, you must put your name down. We will look at you; we will look at various aspects and what level of work you would be able to do. For certain very intense work, you must be below thirty-five years of age. But there are other kinds of things that older people can do.

This is the most important thing that needs to happen in the world – human beings should live in energetically healthy spaces. You might build a beautiful building – that does not mean it is good for habitation. There is a whole science behind how to create a space that will allow a human being to blossom properly. This is important especially where children are growing up – every school must have a consecrated space.

The world is still at a level of ignorance where they think that by consecrating a space, you are bringing some religion into their lives. This will go slowly. We have already eased it up quite a bit. Corporate houses, which earlier never entertained such things, are now asking us to establish energy forms in their offices and other spaces.

Not even two to three percent of what we should do in terms of consecrations, we are able to do, simply because we still do not have the necessary committed force to do it. Everyone is busy with other activities. This work needs a group that is exclusively dedicated to this, one that works in a totally different dimension of life. Essentially, it means to be willing to be an instrument in making something. Maybe you yourself will never understand what you are creating. But you must learn to be an instrument.

In Western cultures, they have taught you that you should never become an instrument in someone else’s hands. With that attitude, you cannot do consecrations. People still do not have the maturity to understand this – they are making stupid moral judgments about everything.

Consecration needs a different breed of people. We can prepare them, but fundamentally, trust and commitment are needed. In order to make you a powerful instrument, it may be necessary to twist and turn you a bit. To make you a doctor, an engineer, or a scientist, do they not torture you? From the age of six, you are in a school – is that not torture? To make a six-year-old child go to school and count “one, two, three, four,” learn “A B C D,” and all this nonsense – is it not torture? It is torture, but only because of that, people become capable of something that they would otherwise not be able to do.

If something has to be done that is beyond the normal limitations of what human beings can do, it needs an extraordinary sense of commitment, discipline and devotion to what we are doing. Otherwise it will not work.

In ancient India, every space was consecrated. That is gone today, but now once again, the necessary interest and trust is spreading. We just opened a small Devi Gudi at our center in Delhi. But the response from across the city has been enormous. We just could not manage the rush of visitors. For the three consecutive days of the opening, the entire two-acre space was filled not only with meditators, but with people from everywhere. The power of the consecration is such – it draws people. Many more consecrations need to happen.

The science of consecration is not something that we can write a book about, tell you to read it to learn a few things, and you know what to do. It is not like that. You have to feel through it. It takes a certain amount of work and a certain amount of closeness.

If we are able to build a larger force of approximately fifty to one hundred people, we can do phenomenal things in the world. But where to find those people who will think beyond their own lives?

Your physical body, your mental structures, your emotional structures, your karmic structures – every aspect of your life has to be looked at, so that your life energies are fluid. If they are fluid, you can use them any way you want. If that is not done, then consecration will be like mumbo-jumbo. The genuine science of consecration will die. Only rituals will live – someone will be mumbling something. They will not care whether something actually happens or not because, anyway, it will be a commercial process for them.

If we really want to create something, we need to build a strong force. We are making an attempt to build at least a small force. But if we are able to build a larger force of approximately fifty to one hundred people, we can do phenomenal things in the world. But where to find those people who will think beyond their own lives? 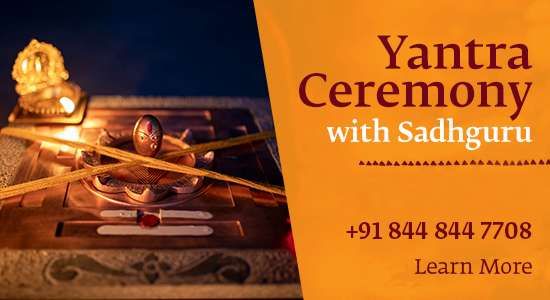 Sacred Spaces
Consecration
Dhyanalinga
Mysticism
Yantra
Energy
Wisdom
Related Content
article
What is the Benefit of Consecration?
Sadhguru elaborates on how a person can benefit by making use of consecrated spaces in their lives.
Sep 14, 2012
article
The Phenomenon of Consecration
Sadhguru speaks about the science of consecration, and how energized spaces can benefit individuals and humanity as a whole.
Jun 30, 2016
article
Consecration – Concentrated Life Process
Does living in a consecrated space have an impact on us? If so, can it be measured? Sadhguru gives us a bit more insight into this mystical phenomenon.
Jun 11, 2019
Close