This June, at the onset of the monsoons, Devi set aflame hearts with her Divine Presence through a series of Punya Poojas across Mumbai.

As even a most potent seed needs fertile soil to find full expression to life, a consecrated space is the need of every human to blossom and transcend the limitations imposed by karmic and social situations.

Sadhguru has always emphasized how important it is for human beings to live in consecrated spaces, and has spoken about the transformation it brings in people’s lives and in the way they function. In this effort, the Bhairavi Punya Pooja is a wonderful opportunity to bring the Grace of Linga Bhairavi into one’s home. This is a specially structured powerful pooja for the Grihapravesam or house-warming ceremony.

Each home I visited, I felt I was entering a temple as there was so much positive energy. - Bhairagini Maa

This June, at the onset of the monsoons, Devi set aflame hearts with her Divine Presence through a series of Punya Poojas across Mumbai. A majority of the participation came from Shivangis who had witnessed the power and mystery of Devi in some form or the other in the last few months. As one of the volunteers from the co-ordination team puts it, “This year we had such an overwhelming response that we had to schedule four Punya Poojas in one day. In the five days that Bhairagini Maa was here, we had a record breaking 21 poojas!”

Another first: most of the co-ordination and participation happened locally, independent of the ashram. Everything was meticulously planned beforehand – right from making lists of volunteers (Devi Sevakas) to having a few mock pooja sessions to ensure there were no unnecessary delays in the set-up or the process. Devi Sevakas would dutifully arrive two hours before the scheduled time for the pooja set-up and even stayed around after the process to ensure things moved smoothly from one pooja destination to another.

As a child I remember I would begin the countdown to my birthday, but now I was counting the days for the pooja. - Anuradha Gaikwad

Speaking of her experience, Bhairagini Maa Chitra says, “I was really inspired and touched by the love and devotion of the Devi Sevakas. I wanted to spend more time with them. Each home I visited, I felt I was entering a temple as there was so much positive energy.”

In many homes, drivers, maids, carpenters and even pets were eager partakers in the process. In one of the homes, there was a pug who peacefully sat through the entire pooja only giving an occasional glance of concern to his mistress when she was visibly overwhelmed with tears. 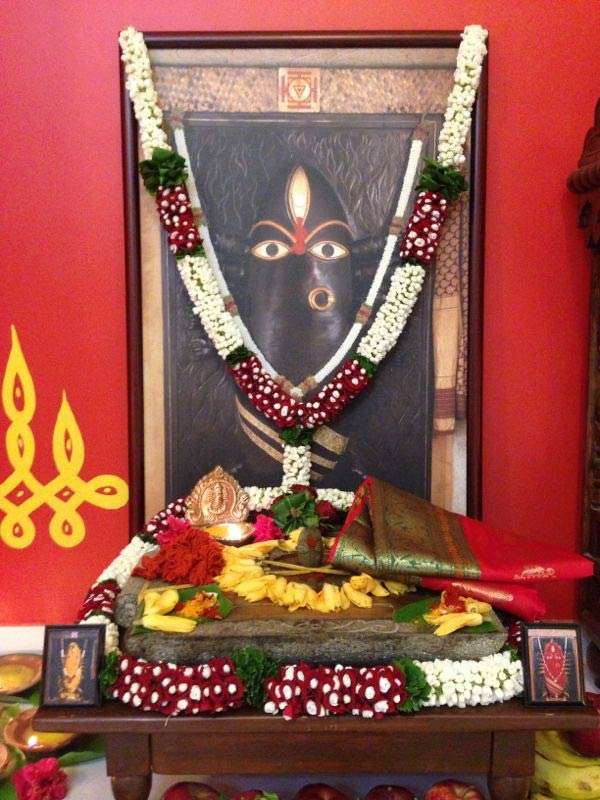 Anuradha Gaikwad puts it rather eloquently, “I was looking forward to this pooja for a very long time. As a child I remember I would begin the countdown to my birthday, but now I was counting the days for the pooja. On this special day, Isha volunteers came to help out with the decorations and preparation. I was touched by their selflessness and the energy with which they went about, as though it was their own family function. As the pooja started, a feeling of calm pervaded me. At that point there was only Devi and me. I realized this was not my home; this was Devi's. I could feel her presence everywhere in the house.”

At the end of it all, so many lit-up households, so many overwhelmed family members, so many ecstatic volunteers, Devi seemed to be drenching all in her love and grace, in every crevice and corner of their hearts. As if taking a cue (from Devi), in a record of sorts, even the Mumbai skies couldn’t wait to open up much before their scheduled date and how!