The Odissi Duet - A Mother-Daughter Connection

This is a story of Sonalika Purohit and her 9 year old daughter Shrinika who are both Odissi dancers. This year they performed at Navratri celebrations at Isha Yoga Center. Read on to find out more about their interesting journey as a mother and daughter turning into Guru and shishya who perform Odissi duets on on stage.

From Biotechnology to Odissi 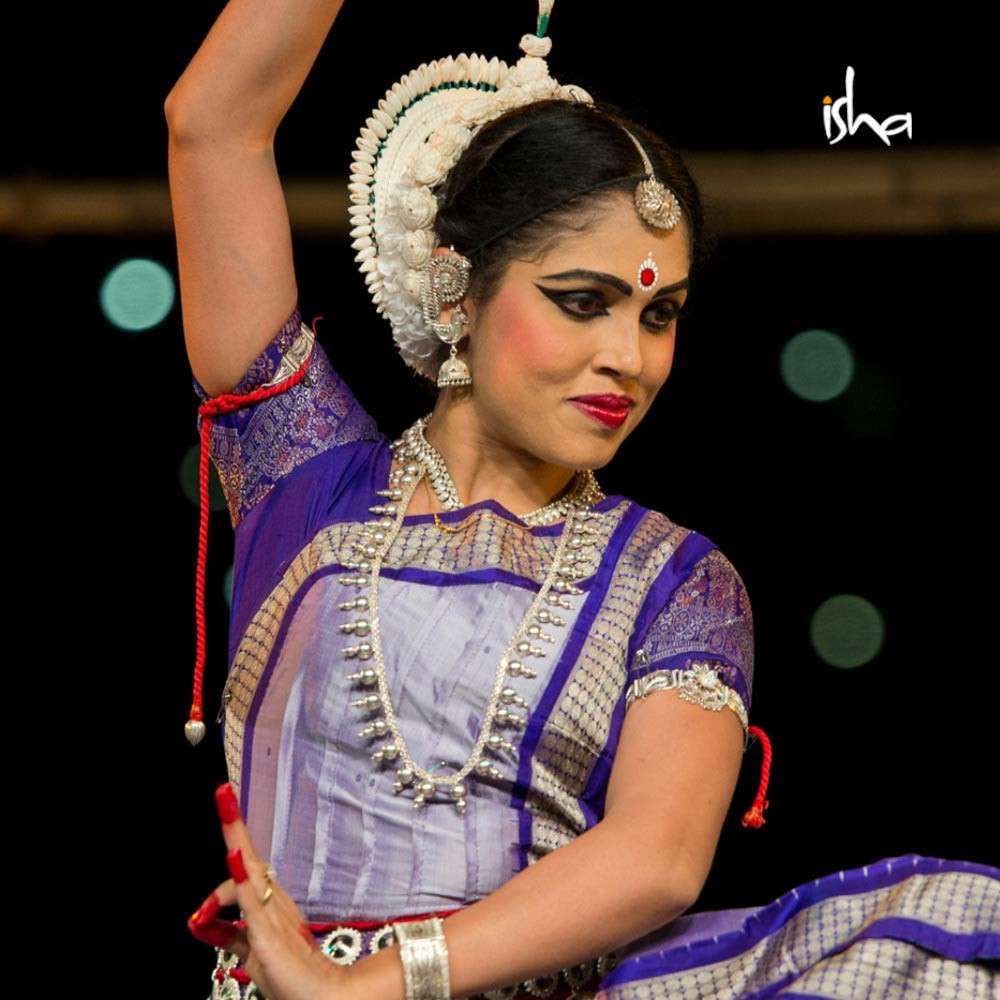 Growing up amidst two trained Odissi dancers (Sonalika’s mother and aunt are both Odissi dancers), naturally made Sonalika inclined towards learning this graceful yet powerful art. Her mother and aunt often performed shows so she grew up in a home where seeing Odissi performances on television was a norm. Even though she thoroughly enjoyed learning the dance form, as a young girl Sonalika never felt that she would pursue this full-time. Sonalika’s father had always been very particular about her studies, and the deal was that as long as she did well on her exams, she could continue to dance! Sonalika, being good at studies, kept her side of the promise so that her father would keep his, and she eventually finished her Masters in Biotechnology. She went on to join the National Botanical Research Institute in Lucknow as a junior scientist.

The coming of Shrinika into the life of Sonalika was a turning point that started her journey as a full time devotee of dance. Fate seemed to be carefully shaping the circumstances that led to her taking up Odissi again. As situations aligned themselves, a little nudge from her husband was enough for her to pursue dance full time. In her own words, “I had been training in Odissi as a young girl and I picked it up again only after marriage in 2008. It was not like there was no dancing in the interim, but this is core dancing that I adopted post marriage.”

Sonalika has previously trained under Guru Rabindra Swain and Guru Sundarlal Patel. She is currently under the tutelage of Guru Smt Sikata Das and Guru Smt Pranati Mohanty. Today she teaches Odissi and has her own dance academy. She is the founder of Ekaagra Svarasa Academy in Bengaluru where she trains kids as well as adults.

For Sonalika, teaching dance is not just a profession but a living passion. Her daughter Shrinika is an integral part of this. Starting from imitating her mother, Shrinika is now firmly and swiftly on the path to become an accomplished Odissi dancer.

Right from the very beginning, Shrinika had a natural flair for dance that could not be ignored. Once it happened that just before a performance, the electricity went off. She was so eager to go on stage that she told her mother, “Mumma, I really want to go onto the stage. Why is the electric current gone?” Although Shrinika can be shy off-stage, on stage she is absolutely fearless and graceful!! One can say that she is born for dance.

Along with her ingrained talent, Shrinika puts in lots of hard work as well. She keeps up a daily routine with school, homework, dance practice, and of course, playtime. Having a mother-teacher like Sonalika makes it even more special. Sonalika believes in maintaining the sanctity and purity of the dance form and in Shrinika she has a prodigy who can do justice to her teachings.

When family and friends saw the little one dancing, they often suggested to Sonalika that the mother-daughter duo should perform together. Sonalika adds, “If you actually see Odissi performances, it’s like a wave – it flows like water. So generally when people perform duets, either it’s a couple, or it’s two girls or two boys who have a similar physique – maybe both are thin or maybe both are plump, maybe both are short or both are tall. I am a tall lady and she is a small five-year-old kid, so I wondered how a duet will come out. But then I thought, ‘let’s give it a try.’” That was the first time, when Sonalika and Shrinika performed in Pushkar, Rajasthan. She fondly reminiscences, “I kept her a little in the front so that she would be visible to the audience and I positioned myself a little behind. Somehow, by God’s grace each and every movement was in sync - our steps, our bodies, and the eyes, it was like a perfect wave.”

When Your Family Has Your Back

Sonalika’s husband accompanied his wife and daughter for their performance at the Navratri celebrations at the Isha Yoga Center. An IIT Delhi alumnus, Srimanta Purohit works as a Senior Project Manager at a top IT firm, and fully supports Sonalika and Shrinika. He shared, “Whatever we see on stage is merely for fifteen minutes. What most of us do not realize is that the artists put in months of hard work behind a single performance. For an artist, more than remuneration, it is the appreciation and encouragement that keeps them going. Family support is crucial and it gives the artist on stage that stability of mind and confidence. Every small support is a contributing factor to what you see on stage.”

Being at Isha Yoga Center

After her performance, Sonalika shared how touched she was to be invited to this divine place and longed to come back and take the stage again in the future. Shrinika smiles with a twinkle in her eye and mischievously quips, “Mumma, it’s such a nice place, I would love to stay here, but if I stay here, how will I continue learning Odissi?”

The mother-daughter duo later shared on their Facebook: “Some experiences can only be felt and cherished. Our last performance was one of these. The ambiance, appreciation from the audience, love and affection bestowed on us, and the divine experience there is just ethereal. Interacted with so many lovely people and the bonding shared is beyond words. I am thankful to God, my Gurus and well-wishers that we got the invitation and opportunity to perform at a place which is so divine.”

Editor's Note: Read more about various aspects of Indian Culture.
Related Content
article
Foxtail Millets - Benefits, Nutrition and 6 Delicious Recipes
The health benefits of foxtail millet are numerous, including weight loss, diabetes management, and pregnancy support. It is high in vitamins and minerals, and has a nutty flavor which makes it a fabulous substitute for rice or wheat in various recipes.
Dec 25, 2022
Loading...
Loading...
article
Isha INSIGHT Day 3 – How to Make Things Happen!
From breaking down success stories to pondering over critical, nationwide issues, Day 3 of Isha INSIGHT was yet another day jam-packed with novel insights and riveting anecdotes.
Nov 28, 2022
Loading...
Loading...
article
Isha INSIGHT Day 2 – A Torrent of Insights
Four remarkable leaders, different industries — Day 2 of Isha INSIGHT was bursting with enrapturing discussion on a range of topics and standing ovations from participants.
Nov 26, 2022
Loading...
Loading...
Close