Loaded with equipment and material for the yatra (including speakers, amplifiers, audio-visual recordings, and Dhyan Yatra T-shirts) as well as our personal luggage, we started from Isha Yoga Center to Chennai early in the morning of 31st August. There, Isha meditators from across Tamil Nadu joined us on the train journey to Delhi where more participants from all over the country and abroad came together to embark on our pilgrimage to places of power and beauty in the planet's highest mountain range.

After we left the busy roads of Delhi and entered the countryside, participants were glued to the changing landscape with lush green fields of sugarcane, swaying with the gentle breeze. Haridwar, the doorway to these mystical mountains, would be the actual starting point of the Dhyan Yatra. Once arrived, we had our first video Sathsang in which Sadhguru briefed us about the do's and don'ts during the yatra, and above all, the importance of reverence while visiting the sacred spaces of the Himalayas. 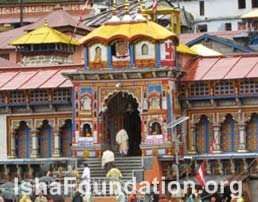 On the following morning, our journey on sloping roads into the mountains began. In the evening Sathsang at the Guptakashi temple, we learnt about the significance of Kedarnath - our first major destination on the yatra. Via video, Sadhguru initiated the participants into a sacred mantra and suggested us to continuously chant it while trekking to Kedarnath. Early the next day, we hit the road towards Gowrikund, the base for the 14-km trek to Kedarnath.

It had started raining that morning and the rain would accompany us almost throughout the trek. Few people took horses to go up, while most decided to climb up by foot. Sidharth, an ashram resident who was supposed to reach Kedarnath first and take care of the room allocation, shared: "I reached Rambada, the 7-km point on the trek in a very short time. But after that, it became very difficult to climb. It was raining and I was feeling very tired. Only because of the mantra that Sadhguru had given us, I was able to continue climbing. As I came closer to Kedarnath, somehow, I just started running. Suddenly, there was so much energy." It would take another four hours for the last participant to arrive. It was still raining and by then, it had become very cold.

After a good night's rest, we had a Sathsang in the Adi Shankaracharya Hall, right next to the Kedarnath Temple. In the audio we heard, Sadhguru spoke about Kedarnath as a "heady cocktail" of various kinds of spiritual processes. We chanted Nadha Brahma along with Sadhguru's voice on audio. This Sathsang was a very deep experience for many. Suhasini from Vizag shared, "At first, I was disappointed when I heard that Sadhguru was not joining us for the yatra. But today, when we were chanting in the Sathsang, it was as if he was actually there. I realized that Sadhguru is with us and I feel very happy about that." Swami Atindra, an Isha Brahmachari, said: "In the morning, I had gone to the temple to do my meditation. But after the Sathsang, when I went to the temple again, the whole experience of the place was very different. It was so intense. I just didn't want to leave."

After breakfast, we nevertheless had to trek down to Gowrikund where the buses were waiting. We reached Guptakashi, a small town with a very old Shiva temple, in the evening. Since Sadhguru had spoken to us about the significance of this temple, we were very eager to visit this place. The next day, many of us came to the temple long before the beginning of the Sathsang to do their practices. The Sathsang started with a guided meditation by Sadhguru which had been recorded at this very temple a few years ago. This explosive process left people in raptures and many of the meditators sat in silence for a long time after the guided part of the meditation was over. With tears in her eyes, participant Nivedita shared: "It was so intense. Sadhguru was there."

After staying in Pipalkoti that night, we started our journey through breathtaking landscapes towards Badrinath, one of the four sacred Char Dhams in India. Though it was still drizzling, most participants immediately went to visit the Badrinarayan Temple, while a few others seized the opportunity for some physical activity and played Frisbee in the bus parking area. A soothing bath in the natural hot water spring near the temple was another welcome form of recreation after the long bus trip. In the evening, as we were watching a video in which Sadhguru spoke in detail about all places we were visiting during the yatra, he surprised us with a phone call! He was travelling in Europe at that time and wanted to talk to the Dhyan Yatra participants. We placed the phone in front of the mike so everyone could hear him speak. After a few sentences, he remarked that he was not hearing anything from the other side, and in response, a commotion of voices arose: "We love you, Sadhguru," - "We miss you, Sadhguru." He replied, "In every single step that you take on this journey, I am with you." Overwhelmed by his Grace and compassion, we continued the Sathsang.

The next day afternoon, we were to head back to Pipalkoti. We had heard that the road to there had been blocked in the morning because of landslides, so it was important not to miss even a minute. We left Badrinath at 2 pm, and four hours later, all the buses were forced to halt on the road since a huge landslide was blocking the way. As it was getting dark, the bulldozers were unable to continue their work and left. With masses of rubble ahead of us and a long queue of vehicles behind, there was no other way than to stay in the buses overnight and wait until the road would be cleared. Our kitchen vehicle had gone ahead and had crossed this area about 30 minutes before the landslide happened, so the access to our provisions was cut and we needed to look out for alternatives to feed the hungry yatris. Volunteers collected whatever snacks people carried with them, with the idea to later distribute everything evenly. It was overwhelming to see how everybody gave without hesitation whatever they had, even though they could have used those snacks themselves that night, or on the last trek ahead.

While there was no chance of moving forward, the buses managed to pull back a little to a section of the road which was well-lit. To our surprise, there were two dhabas (small street-side restaurants). Volunteers immediately went there and discovered that they had a large stock of instant noodles, which allowed us to preserve the collected snacks for the next morning's breakfast. A team of volunteers took over the kitchen. Noodles were prepared in one dhaba, chapatis in the other. Soon, all the participants were served a hot dinner, which was more than anybody could have hoped for in this situation. While the rain still pelted on the roofs of the buses, tears of gratitude were flowing inside.

Fortunately, it remained warm in the buses, and people slept fairly comfortably. By 9 am in the morning, the roads got cleared and we continued our journey. When we later reached Pipalkoti, everybody had many stories to tell about this adventurous night. After an overnight stay in Uttarkashi, we moved on to Gangotri. From there, we were to trek to Gomukh - the glacier origin of the river Ganga, but came to know that the route there was heavily damaged by the rains and government authorities had closed the path for the next four days. Some participants, especially young ones who were keen on doing this trek, were initially disappointed. Nonetheless, everybody quickly accepted the situation as an act of nature and used the free time to take a dip in the Ganga or go to the Gangotri temple.

On the following day, we spent some time at the ancient Vishwanath Temple in Uttarkashi. Sadhguru described the linga there as one of the most powerful ones that are still intact, and so was its impact on many of the participants. Back in Rishikesh, the whole group participated in an aarti to the Ganga, visited the Har ki Pauri ghat and Chandi Devi temple.

That evening, we had the last Sathsang of the yatra. The first one to come up and share was a young participant, Balaji. He summed up his yatra experience as follows: "Many times, we think we are great. But this trip has made me realize that nature is much greater than us. I really wanted to go to Gomukh at any cost. But if nature decides we don't go, we don't go. This trip has made me feel humble." Many other heartfelt sharings followed, and last but not least we expressed our gratitude to all the drivers, cooks, helpers and everybody else who had contributed to make this wonderful sojourn happen for us. Dancing to the tunes of Sounds of Isha, we celebrated the conclusion of a yatra that was not just a journey to breathtaking sites but an enriching spiritual process for everyone who participated.

Kedarnath - A Mountain that Moves
- Sharing by a Dhyan Yatra Participant