How Daniel Became A Full Time Volunteer At Sadhguru School

After stumbling upon Sadhguru on YouTube earlier in the year, Daniel Nuwamanya from Uganda took a brave plunge to leave his Kampala city job in June 2019 and volunteer full time at Sadhguru School.

Me and Yoga? No chance.

As a sharp young fellow with all his wits about him, I was fully aware that Yoga was for posers who don’t want to go to the gym like regular people. They assume a bunch of undignified poses whilst surrounded by incense sticks and assorted paraphernalia – talking all that New Age stuff, chakras and auras and what have you.

Yoga? What are you talking about? I knew all about Yoga. 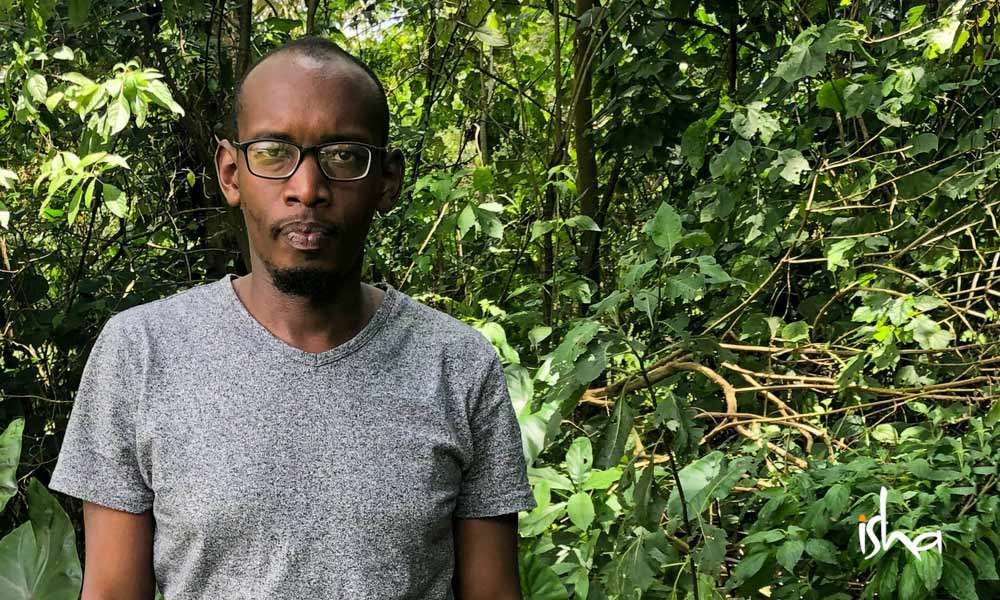 I was doing research for a short story with a certain mystical tangent when a random link brought me face to face with Sadhguru on my screen. He did this weird thing where he first asked for permission before telling a joke. I won’t go into all the details, but let’s just say that the joke was on me.

I like to believe that I can take a good joke as well as the next man, so I laughed tearfully but bravely (like the laughing-crying emoji) and clicked the next link. It was to be the start of a steep descent into great wonder and considerable office Internet abuse as I watched YouTube video after YouTube video of this elegantly dressed sage as he delivered gentle but devastating truths about life, the universe and everything – literally.

After spending several weeks on the receiving end of this kind of treatment, I must tell you that I was dumbfounded, stupefied, flabbergasted and, as a sharp young fellow with all his wits about him, also inordinately suspicious. I had run the entire gamut of philosophical speculation from ever since my university days; I had been at one point a radical born-again Christian, a Buddhist of sorts, an atheist and various other things that I cannot even remember. I had, after all this mystical hitchhiking, firmly come to accept (or believe) that it was all rubbish; hence the deep-rooted suspicion. I fancied myself very detached and level headed, something that I told anyone who cared to listen.

Unfortunately the research checked out, leaving me struggling to find the necessary internal comebacks to combat the searing logic of the yogi supreme from the Internet. Also some snitch in IT had informed the bosses that it be that Daniel from Marketing that was swallowing all the GBs. Data in Uganda is very expensive; bounties have been put out for less. That and the fact that the “powers that be” were growing jittery over the backlog on my desk; coupled with the general ennui about life that I was experiencing, courtesy of the white bearded man from the computer screen, soon resulted in the unthinkable.

I was going to try out this Yoga business.

I returned to the indefatigable Internet to find out how I could join. Lo and behold, the wizard Indian man with the Zen-esque jokes and the turban had been in my country Uganda just two years ago – there was even a Sadhguru School in Fort Portal. What witchcraft was this? Or could this perhaps be…Grace?

Get weekly updates on the latest blogs via newsletters right in your mailbox.
I never knew why else I spent so many of my formative years studying spiritual texts and conspiracy theories, visiting shrines, observing processes, consulting all manner of spiritual people, 90% of whom didn’t understand half of the things they claimed to be masters of.

I reached out to the school; the good people there told me that Isha trained teachers would be conducting Yoga sessions in Kampala at this and that company as part of International Day of Yoga.

The day and its trainings came and went, leaving me with a few basic Yoga practices and also a certain, very definite conviction. I would apply to be a volunteer at Sadhguru School in Fort Portal, Kabarole, some 200 miles out of Kampala. If they would have me, then I would quit my job and go. Though drastic, it was an easier choice to make than any I had made in my short and so far largely useless life. At least useless to me, though others might choose to disagree. Living had always been something of a burden to be honest, and seeking – confusing as it might be – alleviated the burden somewhat. I never knew why else I spent so many of my formative years studying spiritual texts and conspiracy theories, visiting shrines, observing processes, consulting all manner of spiritual people, 90% of whom didn’t understand half of the things they claimed to be masters of. But I imagine it is a common story.

Life at Sadhguru School in Kabarole

I owe it all to the twinkle-eyed guru from the Internet. My gratitude knows no bounds.

To cut a long story short, I am now at Sadhguru School, Kabarole, currently typing this (extra fast to conserve battery) by the light of a small solar lamp while the wind rustles in the fig trees and the full moon beams benevolently through the open window. I am not the sharp young man I used to be, and my wits are undergoing an overhaul. When I came, I started out opening every statement with “like Sadhguru says…” and generally being something of a nuisance. I have settled down a bit now, taking it one day at a time. I have not done any of the programs yet, not even “Inner Engineering,” because the opportunity hasn’t yet landed. I am still watching the videos and re-reading the books. It’s enough for me for now.

At the school I help out with the curriculum (the Ugandan Social Studies part because some of the teachers here are wanderers like me, from all over the world), the school magazine where my writing chops come in useful, as well as with the debate team and a few other small things.

It is a huge boon to live this close to nature, around such vibrant and energetic children, together with many people on the same search for truth. And I owe it all to the twinkle-eyed guru from the Internet. My gratitude knows no bounds.