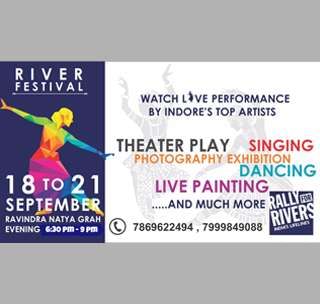 The Indore Rally For Rivers took place on the sprawling 118-acre lush green campus of the historic Daly College, founded by Sir Henry Daly in 1882. Indeed a historic venue for a history-making movement. At the grand regal entrance of the school, the NCC cadets and brass bands were filed meticulously, to welcome the dignitaries, guests, and of course Sadhguru.

Some casual conversations with these students revealed that they weren't there simply following instructions, but were in fact there of their own accord to do whatever they could in support of the rally. When we spoke to the head girl of the school, there was a sparkle in her eyes when she said in awe, "How did he come up with this? I want to know how he did it?" Her question was a fine indicator that the rally was doing what it set out to do - igniting hearts and connecting minds to our rivers. And on a larger scale, it has made the point that if there is clarity of vision and unbridled willingness, we can make great things happen.

The entertainment at the event started with a vibrant and energetic performance of the Daly College students who performed a well-choreographed Kathak fusion dance on the theme of saving our rivers. Of note is that these kids and their teachers put this together from concept to concert in just fifteen days, under the guidance of their principal Mr. Neeraj Kumar Bedhotiya. Bravo!

The lovely and lively Sounds of Isha band collaborated with Nirali Kartik from the Indian folk fusion band Maati Baani and churned up some superb numbers that got Sadhguru up on his feet, jumping and clapping as the audience followed his cue and did the same.

The dignitaries present on the dais were a mix of politicians (municipal, state as well as central administrators), royalty and board members from the Daly College board of governors. Every person who came up to the podium expressed their gratitude towards Sadhguru for initiating this critical movement for our country and gave their absolute support towards the successful culmination of the Rally. Mr. Kailash Vijayvargia, National General Secretary of BJP, said that every citizen must take an oath that they will plant trees, revive rivers, and save the environment. The Mayor of Indore, Malini Gaur Spoke about the importance of raising awareness among people, and pledged the support of the people of Indore, which was also one of the first cities to implement the Swachh Bharat campaign.

Terming Kahn River as “nullah” (drain), Sadhguru said that at least 75 per cent of the untreated city sewage goes right into the river. This same river, along with the sacred Sarswati river, were once the pride of Indore. The Sarswati river has completely disappeared, and the Kahn river has become a sewage collection pond. Seeing this environmental disaster on a daily basis, no wonder the people of Indore were so overwhelmed to have Sadhguru bring Rally for Rivers to their ancient city.

Earlier in the day, Sadhguru was at the Kahn riverbank to unveil an artistic metallic work of Wajir Khan, upon the city Mayor’s request. This modern artwork made of metal pots was erected as a memento of the Rally For Rivers Indore project. Such is the love and support that the rally received in the largest city of Madhya Pradesh.

The volunteers that we spoke with before and after the event were simply ecstatic. Grateful to Sadhguru for starting a movement that gave each of them a sense of purpose, they expressed their gratitude in stirring words and streaming tears.

Dignitaries in the venue:

Crowd at the Venue:

Daly College Students performance of a well-choreographed Kathak fusion dance on the theme of saving our rivers:

MaatiBani with Sounds of Isha:

Students receiving prize for winning in the competition:

Tweets of the day:

Magestic, magical, mystical. I run out of superlatives for Maheshwar. Upon Tropic of Cancer, the very heart of Bharat.-Sg @ChouhanShivraj pic.twitter.com/ts7u1TObaV

Warmth & devotion of people of Maheshwar to #RallyforRivers is humbling. May they continue to strive to save Narmada. -Sg @ChouhanShivraj

Madhya Pradesh is indeed the heart of India. Happy that you are enjoying the beauty of it as you travel. Bhopal eagerly awaits your arrival. https://t.co/egVQcuW5sw

People's participation is at the heart of all our programs. Thank you for appreciating our efforts. https://t.co/V4gGPtJ6lh

The brass band of Daly College, Indore shares what they're going to play and how they feel about the RallyForRivers. #ReviveNarmada pic.twitter.com/jKz21uReWO

The beautiful campus of Daly College, Indore is all set to welcome the chief guests to the 14th Rally for Rivers event. #ReviveNarmada pic.twitter.com/Dh6m404IQV

"Inspite of heavy rains, so many turned out for the #RallyForRivers event," share the amazing Indore volunteers. pic.twitter.com/tFbJncPnzY

Inspiring response at the 14th #RallyForRivers. Heading over to Bhopal via Ujjain to soak in the timeless presence of Mahakaleshwar. Day 21 pic.twitter.com/SOkUURdrYc