The "Ananda Alai- A Wave of Bliss" which has been sweeping the state of Tamil Nadu through a series of Mahasathsangs and Mega Classes has spread its reach into Mysore - Sadhguru's hometown. From April 15-17, Sri Suttur Veerashimhasana Math and Isha Foundation are offering the "Inner Engineering" program - the fourth of a series of Mega Classes which have drawn over 35,000 people in Tamil Nadu in the last one month.

The "Ananda Alai- A Wave of Bliss" which has been sweeping the state of Tamil Nadu through a series of Mahasathsangs and Mega Classes (Sadhguruvudan Isha Yoga) has spread its reach into Mysore - Sadhguru's hometown.

From April 15-17, Sri Suttur Veerashimhasana Math and Isha Foundation are offering the "Inner Engineering" program - the fourth of a series of Mega Classes which have drawn over 35,000 people in Tamil Nadu in the last one month. Sadhguru will conduct the program at the Sri Suttur Math, located at the foothills of his beloved Chamundi Hills.

This is a hill that I have known right from my childhood. I have trekked on this hill, I have camped, I have meditated and done many things - I know every nook and corner of this hill. I even set up business meetings on Chamundi Hills. Usually, when I said 'business meeting on Chamundi Hills,' people were thinking it is in the Rajendra Vilas Palace that was on top of the hill, but I would have it all arranged on a rock! So this is a place where I have spent a lot of time.

Sadhguru's visit to his hometown has begun with a bang. On the evening of April 13th, JSS Mahavidhyapeeta - an educational organization under the guidance of Jagadguru Sri Shivarathri Deshikendra Mahaswamiji of Sri Suttur Math - welcomed Sadhguru to speak as a part of their Golden Jubilee Endownment Lecture series. With over 400 people in the audience, the hall was filled to the brim with "standing room only." It was quite a sight to see two eminent spiritual leaders - Sadhguru and Sri Suttur Swamiji - enter the venue together, welcomed with traditional Karnataka drums and reverent namaskars from those present. The traditional lighting of the lamp inaugurated the event. 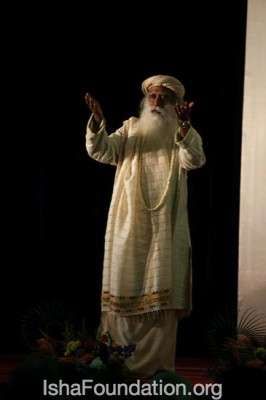 Sadhguru spoke of the possibility of yoga to experience life beyond the five senses, and the necessity to bring spiritual process into the lifestyle as simply as “a mother teaches a child to brush his or her teeth in the morning.” Without this inner wellbeing, he said, any amount of economic wellbeing will be useless. Sri Suttur Swamiji  also addressed the audience in his typically gentle and composed manner, speaking in Kannada, the native language of Karnataka.

The Sri Jagadguru Veerasimhasana Suttur Math has a glorious thousand year tradition of service to the community in many fields. Rooted in the wisdom and guidance of the ancient rishis and gurus, the illustrious pontiffs of Sri Suttur Math have relentlessly carried on their legacy in providing spiritual guidance to millions of followers. JSS Mahavidyapeetha, which started off as a small hostel for poor students and has since grown under the noble guidance, inspiration and leadership of Jagadguru Sri Shivarathri Deshikendra Mahaswamiji, has risen to an organization running more than 300 educational institutions throughout the country from nurseries to post- doctoral courses in many disciplines.

Enlightenment
Yoga Program
Related Content
article
7 Reasons Why You Should Attend “In the Grace of Yoga 2022” Online
The “In the Grace of Yoga” online program is a unique opportunity to be in Sadhguru's presence during the auspicious time of Mahashivratri, from wherever you are in the world! This year, Sadhguru explores a completely new theme – “The Heart of Yoga,” where he will delve into the very essence of Yoga.
Feb 2, 2022
Loading...
Loading...
article
A Date with Nature - Isha Yoga Summer Program for Children
The schools have reopened after summer vacation in India! We can see children flocking to the schools with a lot of enthusiasm and joy. A few hundred children had the opportunity to effectively use their summer vacation to take their body and mind to a new possibility at Isha.
Jun 25, 2018
Loading...
Loading...
article
Isha Yoga Summer Program for Children: Discovering Nature
“It was revelation to see how the Isha Yoga Summer Program for Children went beyond the fun, education and even the yoga practices,” a volunteer shares.
Jun 2, 2017
Loading...
Loading...
Close