If Azerbaijan was a Surprise, Ukraine was a Wonder!

It all began the same day a year ago.

The 8th of November 2017 is a significant day in the spiritual history of the CIS (Commonwealth of the Independent State) Countries. It was on this day that Sadhguru landed in Moscow, Russia for the first time, on the invitation of Sberbank and the Russian-speaking world started becoming more aware of Sadhguru and his work. Since the launch of Sadhguru’s Youtube channel in Russian, there has been no looking back. From the prominent to the common place, from oligarchs to taxi drivers, people from different walks of life watch at least one video of Sadhguru a day, in their endeavor to find answers to their deepest questions.

On 8th November 2018, exactly a year after his visit to Russia, Sadhguru landed in Azerbaijan, a secular state in the Caucasus with a 97% Muslim population. He was there on the invitation of the President’s daughter Ms. Leyla Aliyeva. 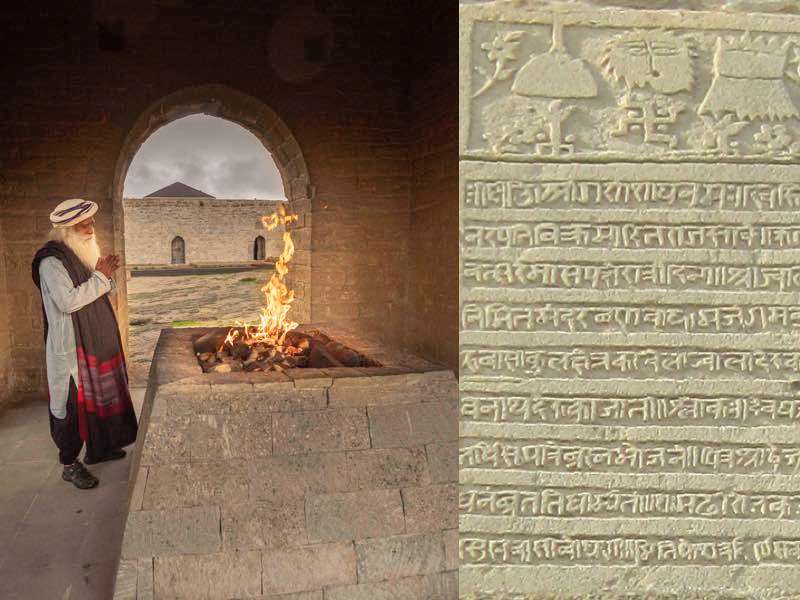 Despite the jetlag and fatigue from travel, Sadhguru set out on his visit to the Fire Temple and the Maiden Tower, which are the cultural heritages of Azerbaijan. The Fire Temple, known as Atashgah, was built by Indians in honour of Jwala ji and was maintained by Indian traders. Sadhguru mentioned that pilgrims perceived the Fire Temple similar to Kashi and even maintained it as their final resting place.

Following several press interviews with prominent channels and journals, Sadhguru was invited by the President of the Automobile Federation of Azerbaijan to visit the Car Museum, which contains a collection of retro cars. Sadhguru let out an exclamation of joy when he entered the museum. There was one particular model of a shiny red fire engine, which albeit retro, was still maintained in running condition. He sat behind the wheel, turned on the engine and tried out the siren for fun.

Sadhguru was also invited to visit the cultural museum of Azerbaijan, where he crept up behind a group of unsuspecting children, intently looking at dolls, and hugged them. When the bewildered eyes turned on him, he mischievously remarked, “I’m one of the dolls, I just came down from the showcase.”

That Rings a Bell

An Inner Engineering teacher narrated that as she was setting up the hall for the book presentation at the Baku Book Center, a girl who came there saw her ring and identified it with Isha. She was so excited that she offered to help, and then stayed outside the center to catch a glimpse of Sadhguru when he arrived there.

Sadhguru’s Russian translation of the book, “Inner Engineering - A Guide to Joy” was presented at the Baku Book Center. Apart from dignitaries of the presidential administration of Azerbaijan, the Ambassador of India to Azerbaijan and Ms. Leyla Aliyeva herself were present. Questions from the audience ranged from the profound to the emotional, including queries like “What is the purpose of life?” and “How to cope with the loss of a loved one?” Answers from Sadhguru left the guests amazed, while wanting to learn more.  Many of these invitees couldn’t wait to see Sadhguru again at the public event the next day.

Sadhguru leaves his mark at public events and golf courses alike, as he did in Baku when he played against Phil Jones, a PGA Fellow Advanced Professional, and almost beat him. Mr. Jones was even more amazed when Sadhguru told him that he is a self-taught player who uses 70% mind and 30% technique. Mr. Jones admitted his percentages were the other way around, relying mostly on his technique. Intrigued by this and wanting to learn more, sure enough, he turned up for the event in the evening, where a seat had to be squeezed in for him and he listened to Sadhguru with rapt attention.

Rounded at the Edges

The Heydar Aliyev center, designed by the popular architect Zaha Hadid, has an infinity theme. It has no corners or sharp edges, but only curved shapes all through. With the prestigious auditorium completely sold out, the organizers arranged a second hall adjacent to it, fitted with a huge LED monitor, translating the proceedings in the main auditorium live. The audience in the second hall were so disciplined and patient that they waited for Sadhguru to sign all the books in the main hall before he proceeded to the second hall. They had imagined that Sadhguru would be tired and would leave after signing a couple of books. To their surprise, Sadhguru, in his customary style, stood there and swayed with the crowd, till the last book was signed.

Here's the tweet from the Azerbaijan Embassy of India, announcing the talk by Sadhguru at the Heyday Aliyev center.

The people who made the attendees sway deserve special mention. Not only did the unassuming and extremely talented musicians of Sounds of Isha hold the audience in a trance with their soulful music, they completely swept them off their feet when they played some Azerbaijani folk music.

What happened behind the scenes of such a fantastic event is what makes it so much more special. The volunteer who was supposed to fly in from Moscow to coordinate the audio-video console could not go due to visa issues. Just when everyone was wondering what to do, three volunteers from Lebanon and Georgia flew in, offering to help. There was also an Indian couple living in Baku who volunteered actively at the event, even though they had never done an Isha program.

On one of their earlier visits to Kiev, the core volunteers from Russia had met with a handful of Ukrainian people who were already in love with Sadhguru and willing to do anything to make the event happen. All this just from watching his videos. As they set up a WhatsApp group and started communicating with them, it snowballed into a group of at least 40 volunteers. Out of this, only 2 of them had undergone any kind of program and 2 of them have undergone the IEO since. The volunteer who helped with the stage decoration had also bought a new bench, cushions, and carpets especially for the event as her contribution.

The Inner Engineering teacher who was supposed to be there ahead of time to get everything organized couldn’t make it because of visa issues. But with the help of the zealous volunteers, she managed the whole set-up through WhatsApp and video calls! Truly remarkable for an event that was happening for the first time and with zero experienced hands on deck!

The day Sadhguru landed in Kiev, it was chilly but there was much excitement in the air from the volunteers outside the airport about how to receive him. One of the core volunteers recounted, “There were about twenty local residents of Kiev who had gathered at the airport to receive Sadhguru in below zero degree weather, for the first ever Isha program there. None of them had taken any Isha program before, yet the expectancy and warmth with which they received Sadhguru was that of lifelong seekers, waiting to finally meet their Guru.

As they received Sadhguru with music, in traditional clothes and making their traditional offering of salt and bread, termed ‘Karavai’ in Ukrainian, Sadhguru opened his arms and wrapped them all in a huge bear hug. At that moment, I'm sure no one felt the cold.”

The event, which happened the same evening that Sadhguru landed in Kiev, was needless to say completely sold out and was a déjà vu of the event in Moscow earlier this year, with people filling not just the seats, but every gap, crack and crevice in the hall. There were about 4000 people in a hall with a capacity of 3700.

Not only for the guests, the event was also an exhilarating experience for the volunteers, many of whom had not done an Isha program. One person who helped in the operations was a paid employee working with one of our volunteers. He refused payment, citing that he had already gained so much from the event.

There were many volunteers who were on the field managing everything from legal to operational aspects without having done any Isha program. Everything happened out of their love for Sadhguru.

One highlight of the trip to Kiev was the closed meeting that a few cabinet ministers and deputy ministers had requested with Sadhguru in the Ukrainian National Museum of Art. In the light of the political tension between Russia and Ukraine, Sadhguru advised them in simple terms as to how they can resolve their conflicts and secure a safe future for their children. They were indeed very receptive to Sadhguru’s words and thanked him profusely for taking a keen interest in humanity.

Anywhere Sadhguru went, whether in Baku or Kiev, people showered him with so much love that even the volunteers were overwhelmed by the warmth and love they received from people, despite the language barrier. According to one of the Russian core volunteers, “This is only the tip of the iceberg and there are thousands more Russian-speaking people in the world that are thirsty for Sadhguru’s Darshan.”

Editor's  Note: Keep in touch with the latest on Sadhguru's events and wisdom by downloading the Sadhguru App.

Volunteer
Inner Engineering
Related Content
article
The Bicycle Yogis: Through the Rear-view Mirror
After 4 months on the road, peddling the states of Tamil Nadu and Karnataka, the Bicycle Yogis have now touched over 32,000 people, sharing the gift of Yoga with rural India. Over the New Year the team took a short break to relax, to look back and to look forward at the road that lies ahead. Let’s hear their story in their own words.
Mar 18, 2020
Loading...
Loading...
article
The First Inner Engineering Class in Ghatanji, Maharashtra
An Inner Engineering teacher, Tejas, shares his unique experience of teaching the class in Marathi language to the villagers in Ghatanji in Maharashtra where the Rally for Rivers team is working to revive the Waghadi river.
Mar 12, 2020
Loading...
Loading...
article
The Bicycle Yogis: Offering Free Yoga To 18,000 Rural School Children
Let’s take a ride down memory lane as the Bicycle Yogis take us through some of their favorite memories from their busiest month yet - meeting a blissed out watchman, teaching deaf children, riding along Cauvery – and much more!
Jan 8, 2020
Loading...
Loading...
Close