On the first day of Navratri, Sadhguru explains the festival’s significance, and we look at the various events happening at the Yoga Center.

Navratri, the nine nights that celebrate the Divine Feminine are a time of great festivity in India. At the Isha Yoga Center, several colorful and exuberant events will be taking place throughout these nine days and on Vijayadashami, the day after Navratri.

On the first day of Navratri, Sadhguru explains the festival’s significance, and we look at the various events happening at the Yoga Center.

The night before Navratri is known as Mahalaya Amavasya, and is a time when one pays their respects to their ancestors. Sadhguru explains the significance of the day:

“We have taken all the things that we have today for granted. But without the generations that came before us, firstly we would not exist here; secondly, without their contribution we would not have all the things that we have today. So instead of taking them for granted, today is a day when we express our gratitude to all of them.  It is done as a ritual to pay homage to one’s dead parents, but is actually an expression of gratitude for all those generations of ancestors who lived before us.” 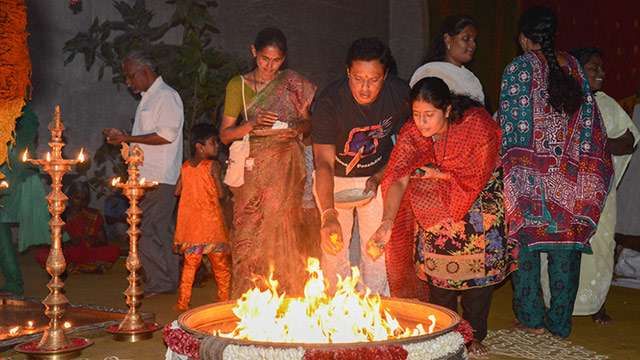 Devotees at Linga Bhairavi participated in Agni Arpana offered from 6 pm till midnight, and a special Kalabhairava Shanti Process at midnight. Meghaa describes her experience of this once in a year event:

“When I first entered the temple, I saw the trishul and then the fire and then Bhairavi's three eyes. It was so enamoring that I couldn't resist putting an offering for the Agni Arpana. I also did the Kalabhairava Shanti. Earlier, I had called my parents in the US and woke them up and demanded my grandparents’ photos! They emailed me and I printed them out, and when I saw their faces in the photo, it felt so wonderful. I have always been used to being taken care of, but this was the first time I felt like I was taking care of them. What they could never reach for in their own lives, I got to do it for them and that too after their death. It was a very fulfilling and beautiful experience.”

The Significance of Navratri

The southern run is the phase of intimacy or the feminine; the earth is acting out her role as a woman. Festivals concerned with the feminine energy are celebrated only in these six months. The whole culture of this land was attuned to this. Every month, there is a festival of some kind.

In this feminine half of the year, September 22nd marks the autumnal equinox; and the quarter from the first Amavasya or new moon to the beginning of Uttarayana in December is known as the Devi pada. In this quarter, the northern hemisphere of the planet becomes “gentle” because it is the quarter where the northern hemisphere receives the least amount of sunlight in the year. So everything becomes subdued; it is not “on” in a big way.

A special Navratri sadhana has also been offered by Sadhguru for ladies which can be practiced by anyone at home. A devotee from Delhi relates her experience of the sadhana and how it helped her receive Devi’s Grace.

"It was so wonderful that I could do something so simple and powerful from home that helped me connect with Devi. I am very grateful to Sadhguru for having given me this opportunity."

Today’s concert featured Carnatic vocalist Rama Ravi, a concert musician for over three decades, and a student of stalwarts such as Mysore Vasudevacharya, Budalur Krishnamurthi Sastrigal, M.D. Ramanathan and T.K. Ramaswami Iyengar. Inspired by her mother Thulasi, a disciple of Parur Sundaram Iyer, Ms. Ravi spent time at Kalakshetra, where she trained as a musician and also showed great promise at Bharatanatyam, under the tutelage of Rukmini Arundale.

Ms. Ravi’s performance was an epitome of her traditional classicism. She is well known for her performance in the style of the Dhanammal School of Music, and her performance today did not disappoint on that count. She was accompanied by her daughter Nandita Ravi, student of Bombay Ramachandran, on vocals, and VV Ravi on violin and RV Prasad, tutor at Isha Samskriti, on mridangam.

Ms. Ravi has featured in Sangeet Sammelan recitals, and national programs on Doordarshan and All India Radio. Her performances have also won international acclaim, for instance at the Paris Autumn Festival, broadcast nationally in France, where her classicism was applauded by the perceptive audience. She was conferred the Sangita Kala Acharya award by the Madras Music Academy in 2012.