Isha Serpent in the News!

Isha Serpent, a service-oriented branch of Isha Foundation, was launched recently with Sadhguru’s blessings at the Isha Yoga Center. Not very long after it was founded, the first task came in - rescuing a king cobra! Click here to see more about the story and its place in the news.

I sha Serpent is a service-oriented branch of Isha Foundation, which was launched with Sadhguru’s blessings after the Adiyogi Alayam consecration. Having been involved in rescuing snakes for many years, the Isha Residents saw it was needed to establish a formal branch to deal with the requests. With the constant expansion of human habitation, contact between snakes and humans has been increasing steadily in the last few years. Apart from bringing the snakes to safety, Isha Serpent also conducts awareness drives to properly educate people on how to deal with snakes. Typically shy of humans, most snakes are non-poisonous and are of no threat to humans, but are many times killed by people out of fear. Even poisonous snakes need not pose a danger, if one knows a few guidelines as to how to handle them. With this goal in mind, our snake enthusiasts have been making headway towards solving this problem, which is especially common in rural areas.

Just before New Year’s, Isha Serpent got its first big job - to rescue a 13-foot long king cobra! Spotted at a farm near the Kerala border, needless to say, it triggered quite a bit of panic in the area. The people around tried to scare the snake away, which then hid in a rat hole. A local NGO was informed, after which they called B. Nirmal from Isha Serpent, who went to handle the matter. By widening the hole where the snake was hiding, Nirmal and the volunteers were able to remove the snake without harming it. The whole operation took over three hours, after which the king cobra was transported to a more ideal habitat in a reserve forest.

Check below for the press account of the incident, which was covered in the local section of all major newspapers. 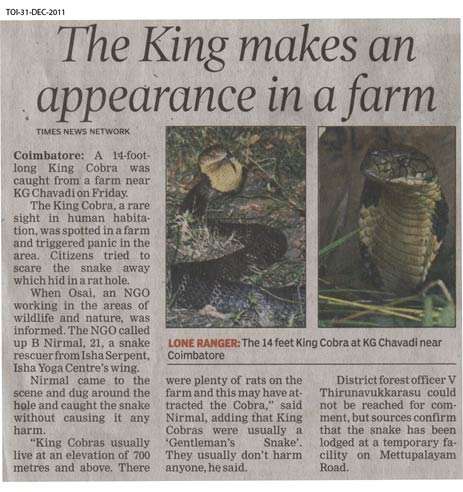