In 2017, the CAG mentioned Isha Foundation under 2 headings - ‘Non-eviction of encroachment in Forest Area” and “Urbanization in Elephant Reserve”. This response is to highlight the inaccuracies/incompleteness of the CAG report.

The CAG report has mentioned Isha in the section "Non – eviction of encroachment in Forest Area" and says:

"Government replied (November 2017) that the encroachments did not fall under the purview of TBGP (Tamil Nadu Biodiversity Conservation and Greening Project). The reply is not tenable as the project included strengthening resource protection with geo referencing location boundary markers using Global Positioning System (GPS) for monitoring encroachments and the same was implemented in Booluvapatti village which was part of Coimbatore DMU.

The Tamil Nadu Forest Department itself in its Counter Affidavit filed categorically states that:

All these conclusions are based on the report of the Regional Conservator of Forests, Coimbatore Region.

The CAG report says, “Urbanization in Elephant Reserve: The buildings were in the protected area of Booluvapatti reserve forest range, known for elephant corridor / habitat."

Get weekly updates on the latest blogs via newsletters right in your mailbox.
Isha is not present in the elephant reserve nor is it anywhere near an Elephant corridor.

Even the Counter Affidavit filed by the Tamil Nadu Forest Department also states that these allegations have cropped up because of some petty dispute with officials of Isha Foundation.

In March 2017, the HACA approved all the buildings of Isha Foundation. In May, technical clearance was given by the Tamil Nadu Town & Country Planning. 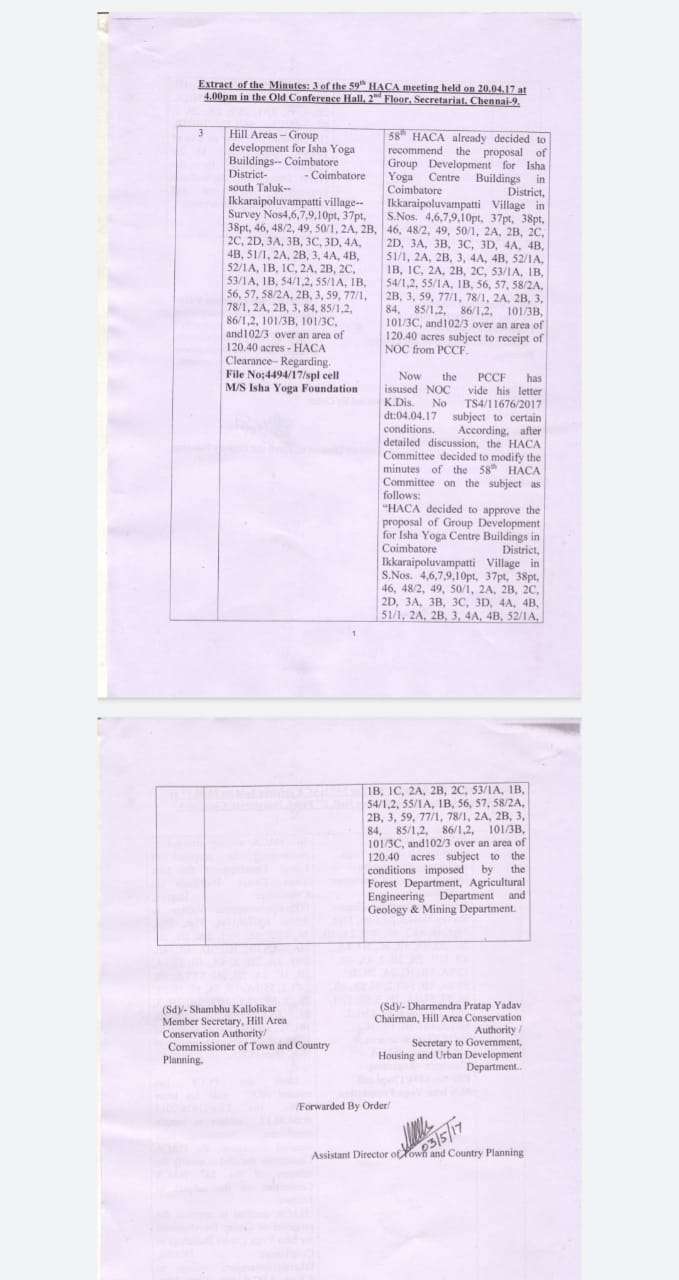 All these facts were ignored by the CAG in its report.

Truth
Related Content
article
No Land Encroachment, Intrusion into Elephant Corridor by Isha Yoga Centre: TN Govt's Reply on RTI
An article published by news18.com mentions that, "The RTI responses are an attempt to clear out the clouds of suspicion hanging over the multi-acre Yoga Centre in Coimbatore. The RTI reply has also revealed that there is no notified elephant corridor in the Coimbatore Forest Division, where the Isha Yoga Centre is located."
Dec 12, 2021
Loading...
Loading...
article
Canada’s first Youth and Truth at the University of Toronto
University of Toronto hosted Canada’s first Youth and Truth event with over 800 students, faculty and alumni filling the hall to listen to Sadhguru’s candid answers to questions about aspirations, ethnic identity, academic stress and drug abuse.
Nov 29, 2019
Loading...
Loading...
article
Truth About Allegations Against Cauvery Calling by Pseudo Environmentalists
This is a response to an open letter written to actor Leonardo DiCaprio by certain self-proclaimed environmental groups, that is devoid of evidence, study and concern for 84 million people living in Cauvery river basin. In order to expose the malicious intention behind these baseless allegations, we present the following evidence for education of all.
Sep 26, 2019
Loading...
Loading...
Close