How It All Started

If we want to make a difference, it is always better to start with what is in our hands, with situations around us. As our capabilities increase, we can extend the radius of our activities - this is the standpoint Sadhguru generally takes when it comes to the question of how to reach out to others. With the successful implementation of Action for Rural Rejuvenation (ARR), Isha has gained wide experience in transforming lives in rural communities of Tamil Nadu and neighboring states. At the same time, human suffering is human suffering, Sadhguru says, no matter where or who it is. 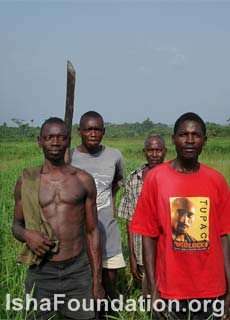 Roshan Ahmed, one of our trustees of the Isha Institute of Inner Sciences in the UK, who is also a founder trustee of the Environmental Foundation for Africa (EFA), requested Sadhguru about bringing Isha's offerings to Africa. For the past 15 years, this NGO has been working towards restoring and protecting the environment in Sierra Leone and other Western African countries.

Roshan and Tommy Garnett, Director of Regional Programs, EFA, visited the Isha Gramotsavam in Chennai last year. When they saw the scale and success of the ARR activities and the active participation of the villagers in the project, they were stunned. Villagers who were ready to spend money from their own pockets to come to Isha Gramotsavam and celebrate something which has changed their lives was something completely unheard of to them.

The fact that Action for Rural Rejuvenation and its whole methodology was created by Sadhguru in such a way that it is replicable anywhere gave them new hope for their work with rural communities. In a meeting with Sadhguru, they discussed the plan of reaching out to Africa the Isha way.

After Sadhguru agreed on venturing into Africa, Sekar, project manager of Action for Rural Rejuvenation, went to Sierra Leone in December last year. He spent 12 days in the country doing survey in the rural areas and meeting key figures including several NGO heads in the capital. On the basis of the information gathered there, he created a one-year-long project for Sierra Leone.

In the first phase of the project, four Isha volunteers - three Inner Engineering teachers and one agricultural expert - went to Sierra Leone for a period of two months. One of the Inner Engineering teachers and the agricultural expert were working in rural communities of the Tiwai Island Wildlife Sanctuary. They conducted yoga programs, sports and recreation activities for the villagers to enhance their physical and mental condition. The Isha volunteers also introduced simple and effective practices for a sustainable agriculture in harmony with nature.

Right during the course of the 3-day programs, villagers reported relief from physical pain and an experience of inner peace during the meditations. Community games organized during the programs saw the whole village coming together and playing, which many villagers expressed was an extraordinary happening in a community traumatized by long years of civil war.

Not only the war had a devastating effect on the country, the lack of environmental awareness and of knowledge about alternative farming methods has resulted in a decrease of forest land in Sierra Leone from 75% to 5% over the last few decades, caused by the slash-and-burn agriculture practiced by the local farmers. Every year, they used to spend six to seven months clearing up forest land to grow rice, putting in enormous effort and unknowingly end up disturbing the whole eco-system.

When the villagers heard about the possibility of rice farming on the same piece of land every year, using locally available fertilizers and pest repellents, they were eager to start this practice immediately. People from two neighboring villages collected money and came to the Isha volunteers saying they want to start a combined farm with it. Members of the EFA shared that such an initiative from the side of the villagers was completely unheard-of. The impact of yoga programs and community games became apparent.

Villagers held the Isha volunteers very dear to them. Even at that time of the year, when they struggle to save every grain of rice that they have, their hospitality was amazing. Villagers and volunteers stayed together, ate together, did yoga together, played together, worked together and danced together joyfully, regardless of the extremely poor living conditions they were in.

Parallel to the work in the rural areas, the other two Inner Engineering teachers offered yoga programs to the urban population of Sierra Leone's capital, Freetown. The yoga programs in Freetown particularly focused on NGO heads and staff. The working conditions for NGOs are extremely difficult in a country where corruption and non-cooperation by the local population are the rule rather than the exception. Many who have worked for help organizations in the country had initially started out enthusiastically but over a period of time found themselves frustrated by the outside situation; they tend to lose the hope of change and resign. So it was crucial to provide those whose job it is to help others with an inner tool which gives them the strength to join hands and continue their work towards a sustainable transformation and development of the country.

Along with the NGOs members, people from various walks of life participated in the Inner Engineering programs in Freetown - among them several businessmen and servicemen. In addition, two special programs were organized for the Shooting Stars (under-20 age group) of Sierra Leone's national football team and for the members of EFA.

The goal of these two months in Sierra Leone was to set the foundation of a pilot project which can be replicated by others over a period of time for a sustainable transformation of the country. Isha will assume the role of an advisor and train people to take the project ahead.

Sierra Leone is a country in West Africa. In spite of being rich in natural resources, especially diamonds, it is the lowest ranked country on the Human Development Index and seventh lowest on the Human Poverty Index, suffering from endemic corruption.

For centuries, the country had been one of the centers of the transatlantic slave trade. From the late 18th century, freed slaves from the UK and America were brought back to Africa and settled there. Later, the country became a British colony and gained independence in 1961. Years of political and social instability, aggravated by greed and corruption, resulted in a protracted civil war over money and power during which over 50,000 people were killed and hundreds and thousands forced from their homes. From 2001 on, UN forces managed to disarm the rebels and by 2002, the war was declared over.

In ten years of civil war, the infrastructure in the country got completely destroyed and basics like clean drinking water and electricity are still are not available in large parts of the country.

Working in Sierra Leone, a country marked by corruption and long years of civil war, is truly a challenge for any NGO. Many had come to Sierra Leone with noble intentions and well-meant plans but were not able to induce any sustainable change because most organizations only focus on one particular aspect like environment, food security or sanitation etc instead of improving people's quality of life as a whole. Unable to raise the necessary awareness, NGOs also face a lack of cooperation by the local population.