ACTION NOW: On the Farmers’ Trail of Cauvery Calling

On July 31, 2019, Sadhguru flagged off the Farmers’ Outreach Campaign - a game changer aspect of Cauvery Calling. Under this campaign 28 trucks along with volunteers are driving towards various districts in the two states of Karnataka and Tamil Nadu, to meet thousands of farmers and educate them about the profitable benefits of agroforestry. But more than that, the volunteers also are getting a glimpse into the heart-breaking reality of farmers’ lives.

“If there is no Cauvery, there is no water for consumption. I had seen Isha people a couple of months back, but I am not able to recall where exactly. A long time ago, they had conducted a program, and I have listened to it. Now, the foundation is working so hard to support the farmers. There is nothing wrong in joining hands with such a movement, it is actually good for the farmers. I say, let’s go ahead and do what they are suggesting.”

These words deeply touched Narendra. He shares, “Hearing this from an ex-board member of a taluka, in the first village we visited, brought tears to my eyes and the entire journey in the coming month seemed worthwhile.” This volunteer will be travelling along with a truck from one village to another for nearly a month as a part of the Farmers Outreach Campaign for Cauvery Calling...

On July 31, 2019, this wing of Cauvery Calling got a grand opening with a flag off ceremony led by Sadhguru - the mastermind behind this ground-breaking initiative. The ceremony paved way for 28 trucks, which will drive towards various districts and reach out to the thousands of farmers in the two states of Karnataka and Tamil Nadu. These trucks carry the vision of the project in Sadhguru’s words, and volunteers will be meeting thousands of farmers to educate them about the benefits of adopting agroforestry, which can help multiply their income 3-8 times in 5-7 years.

On August 5, 2019, a royal milestone for the initiative was created when His Royal Highness Maharaja of Mysuru, Yaduveer Krishnadatta Chamaraja Wadiyar flagged off the Karnataka campaign near Kote Anjaneya Swamy Temple at the north gate of the palace. “The temple looked magnificent, like it was all dressed up for the event, and as we entered inside, the priests conducted a welcome pooja for the vehicles and the event began on a very positive note,” Raisa, an Isha volunteer at the event, shared delightedly.

Each truck is supported by a team of volunteers including a few who have for a long time been part of Project GreenHands, an environmental initiative of Isha Outreach. Many of the new volunteers are city bred, and have not been to villages before, but their willingness to reach out to farmers is truly inspiring. Their involvement is such that they named all the teams after the tributaries of Cauvery - Arkavati, Lokapavani, Hemavati, Shimsha, Kabini, Lakshmana Tirtha, Kapila, Honnuhole.

The Policeman Pitches in for Cauvery

A volunteer shared the excitement of their first meeting with the farmers:

“As the truck entered the village, people of all hues started gathering around. The crowd was supporting the driver to park at an appropriate place and angle, to ensure that a video screen (built into the truck) was visible to all. The enthusiasm went to another level after they finished watching the video that explained Cauvery Calling. People got curious and started asking questions related to the project and agroforestry. Their inquisitiveness was a major inspiration for the Nadi Veeras - these guys are so motivated and are specially assigned to accompany the vehicles and resolve their queries.”

“I was surprised when I saw a police officer holding the campaign pamphlet and sharing his thoughts with the farmers. That’s when I knew that amidst all the chaos and flips, something fundamental was being built, a perfect connection with the farmers,” shared another volunteer, Viniti. 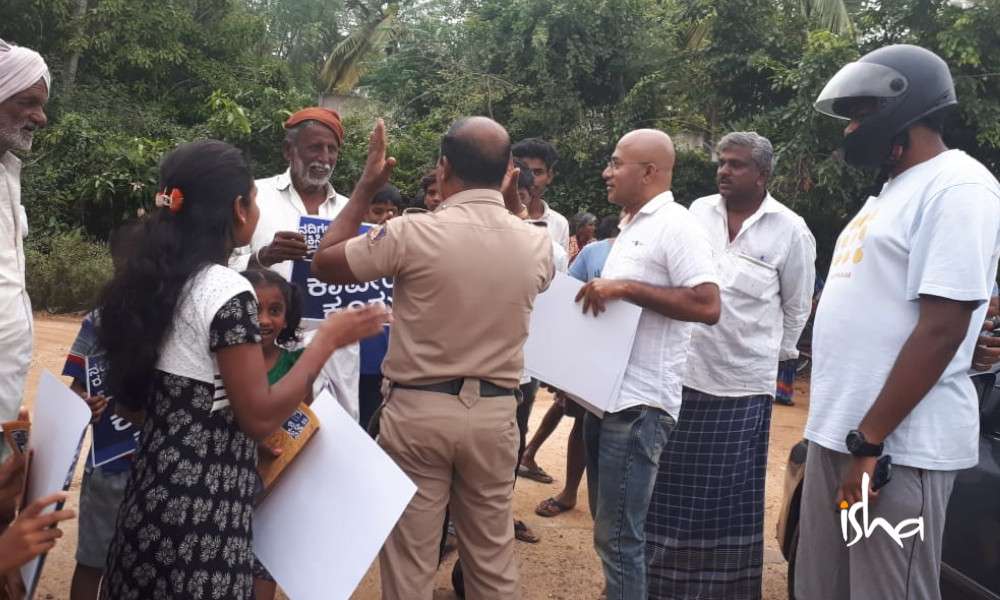 Farmers became one with the cause when the ex-taluka head eagerly stepped in and started to address the meeting himself, “United Nations has already said this – there is going to be a water crisis by 2022-24. So we have to improve the situation, right? If we don’t conserve drinking water, it is as good as putting our lives in jeopardy, isn't it? Good, go ahead!”

“We need monsoons!” urged the farmer on his right.

“There was no monsoon at all this year. No monsoon at all! It has not come to Kodagu. It just rained yesterday and the day before yesterday, that’s all. But see, in the northern part of Karnataka and in Maharashtra there are floods,” another farmer jumped in to say.

“We wanted to tell them that we can’t make monsoons shower, and that’s why we need trees!” a volunteer shared.

The people were anguished and hopeful at once, and the unstoppable determination of Cauvery Calling came as a blessing. “It was that kind of a moment when someone in despair shares his pain with you and suddenly he discovers a new hope featuring on screen, in front of his eyes,” observed Surya, another volunteer.

“Finding myself among so many farmers, and seeing their plight first-hand, reminded me of what Sadhguru said during Rally for Rivers: ‘Farming - the very foundation of our civilization - has become a heartbreaking activity. Time to Rally for Rivers,’” said Raisa.

“I feel so fortunate to be part of this historical happening in this part of the country,” added Arkavati who has already forgotten her old name and is happy to be known as a tributary of Cauvery.

Editor’s Note: Anyone can support Cauvery Calling. Here are a few ways to get involved:

Connect to the farmers of Cauvery basin. Stay Tuned!