Canada’s first Youth and Truth at the University of Toronto

University of Toronto hosted Canada’s first Youth and Truth event with over 800 students, faculty and alumni filling the hall to listen to Sadhguru’s candid answers to questions about aspirations, ethnic identity, academic stress and drug abuse.

On November 12th, 2019, the University of Toronto was honored to host the first ever Youth and Truth event in Canada. With over 800 students, faculty, alumni and public attendees present, the event was completely sold out. As the event drew near, many people without a ticket arrived early and lined up with hopes that seats would become available. One graduate who had not purchased a ticket yet arrived over an hour ahead of the event and pleaded, “I don’t take up much space; I just want to be in the room!”

The simple question is, have you read the user’s manual? 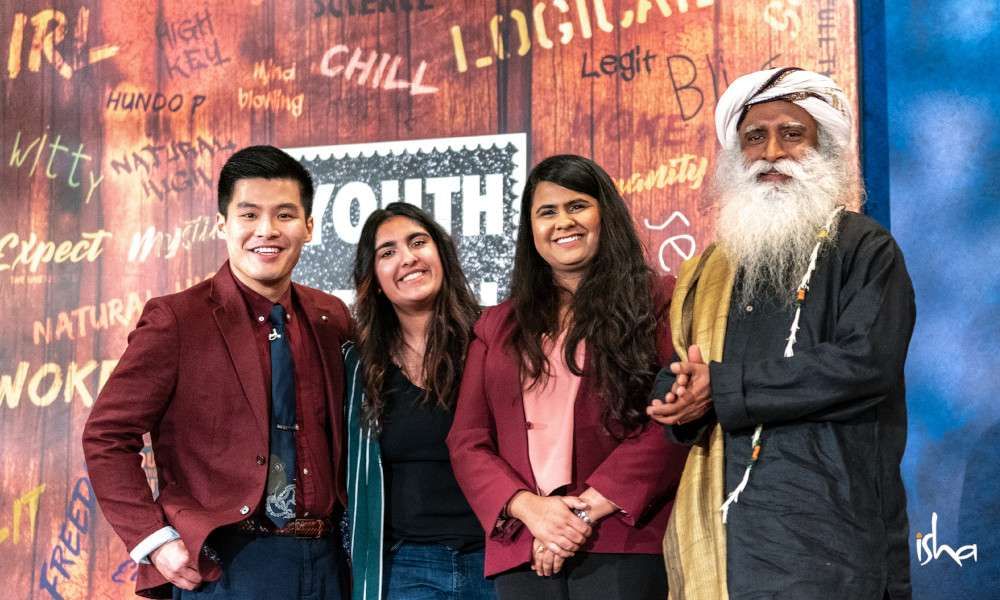 Following an exhilarating live musical performance, Sadhguru and the three University of Toronto panelists began the evening with probing questions sourced from the student community. Daniel Nguyen, a recent alumni working in marketing for Walt Disney Studios Canada, opened the conversation with a question on healing from past pain. When the conversation reached the topic of expectations and aspirations that we have for our lives, Sadhguru shared a simple blessing: “Let something happen in your life that you could not dream of. That means your dreams should not come true!”

The other two panelists shared heartfelt questions spanning failure, identity, and academic competition. Kanika Sachdeva, a second year MBA student at the Rotman School of Management, inquired about dealing with stress and finding inner happiness in competitive academic environments. “You have a very sophisticated machine in the form of human mechanism,” said Sadhguru. “The simple question is, have you read the user’s manual?”

Malika Daya, the third panelist and an undergraduate studying International Development and Anthropology, shared her struggles with identity, growing up in Canada in an Indian family that was most recently based in Tanzania. “Aren’t we glad everybody is different and nobody is like us?” Sadhguru asked. “We just need to educate the world that difference is wonderful, discrimination is horrible.” He went on to say, “Evil is not in differences; evil is in you thinking one is superior than the other.”

We just need to educate the world that difference is wonderful, discrimination is horrible.

Once the event opened up to questions from the student audience, dozens of eager hands shot up. The questions ranged from honoring promises to finding the right Guru to substance abuse.

As the event was coming to a close, a student shared a much-awaited question on drug and alcohol abuse. “Marijuana and alcohol are everywhere and it can lead people to destructive behaviors. It is impossible to escape; what do we do?” Sadhguru started off with clarifying how this topic should be looked at. “Instead of looking at these things in terms of morality, whether it is right or wrong, let’s look at it this way. We are not looking for money, power, love, anything - we are looking at how this life can become a little more. So if you want to become a little more, isn’t it important that your faculties are a little more heightened right now? Why do people think that by lowering faculties, life gets high? It doesn’t, it just gives you an illusion like that, for which you will pay a price.” He concluded by saying, “At this stage in your life, you must look for those things which will heighten your faculties, not lower your faculties.”

Following the session, the lobby was buzzing as attendees basked in the excitement of having been with Sadhguru. The response from students was overwhelming with many sharing about how reassuring it was to hear that others had many of the same questions that they did. Students and teachers alike were floored by Sadhguru’s wit and humor and blown away by his clarity.

“There’s no bias in his answers - things I can’t discuss sometimes even with my own parents - I feel so free while listening to him. I don’t feel judged.”

“I was so inspired to see the volunteers at the event and how aligned their way of being was with Sadhguru’s words. They looked so happy to be here and I’m really looking forward to absorbing what Sadhguru has to share with the world.”

“As soon as Sadhguru walked in, the entire room felt so vibrantly alive! Especially on those topics that are considered taboo, Sadhguru just brought light to the darkness.”

“Sadhguru wasn't giving advice on how to live your life; he was giving you a simple nudge, making you aware of your options... how many choices we have and can make on a daily basis. It was truly empowering.”

More than the audience comments, it was the faces that said it all. Bright, shining, and full of possibility - their time with Sadhguru left them inspired, awed and longing for more. Some couldn’t seem to tear themselves away, waiting hours after the event just to have one more glimpse of Sadhguru as he left the building. While many questions were answered, one unanimous question remained: “When is Sadhguru coming back to Canada?”