The Purpose of Education
Sadhguru: Educating yourself fundamentally means to broaden your horizons. From being in limitedness you want to enlarge yourself. Unfortunately, the form of education that is imparted to people today, despite broadening…
Article 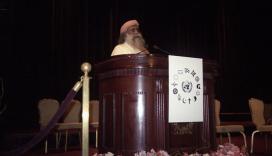 World Peace Day 2013
'Be Part of Global Unity.' In honor of United Nations International Day of Peace, come together, get inspired, and create peace within yourself, your community and in your world. On Sept. 21st, Isha Foundation, an…
Article

Devi Patron of Arts
Navaratri is traditionally a time when the performing arts are celebrated. Navaratri at the Isha Yoga Center includes various classical dance and music performances every night. The event provides a wonderful opportunity for…