On the fifth day of Navratri, Sadhguru looks at Devi’s role in the existence, and the energy form we call Kali. We also present Sounds of Isha’s Devi Suktam rendition.

Navratri, the nine nights that celebrate the Divine Feminine are a time of great festivity in India. At the Isha Yoga Center, several colorful and exuberant events will be taking place throughout these nine days, and on Vijayadashami, the day after Navratri.

On the fifth day of Navratri, Sadhguru looks at Devi’s role in the existence, and the energy form we call Kali. We also present Sounds of Isha’s Devi Suktam rendition, and look at Madhubani paintings in the Hands of Grace handicraft expo.

Sadhguru explains about Goddess Kali and her role in some sadhakas’ lives.

The hymn, “Ya Devi Sarva Bhuteshu,” found in the Devi Mahatmyam of the Markandeya Purana, addresses Devi as “She Who is the Goddess of Everything.” Here is Sounds of Isha’s rendition of this ancient hymn.

Sadhguru explains Devi’s role in the existence through a small story, and looks at the origin of the Sanskrit word, stree, meaning woman. 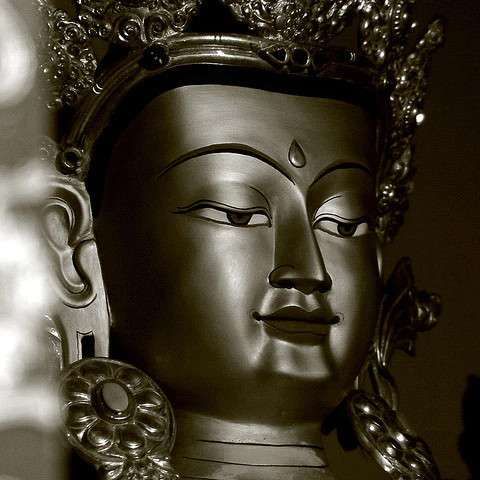 The original word to describe the feminine was “re.” The word “re” refers to the Mother Goddess of the existence and is the basis of the more recent word “stree.” “Stree” literally means a woman. The word “re” means movement, possibility, or energy.

In terms of creation, how did the feminine happen, first of all? The story goes like this. The forces which were detrimental to the existence rose and started threatening the very existence which was still in an infant state. So the three main gods, Brahma, Vishnu and Mahesh, met. These three gods signify three different qualities. They understood that a combination of these three qualities was needed. So all of them exhaled powerfully, letting out the best of what they were. This exhalation from these three forces merged and became the feminine, or the Devi. So Devi is the space which holds the three fundamental forces in the existence. It is this force that we refer to as “De-vi.”

Hands of Grace, the handicrafts exposition has begun at the Isha Yoga Center, and will run till 13th October. Today, we feature the Madhubani style of painting, from the Mithila region of Bihar and the Terai region in Nepal. Madhubani is based on the ancient rituals of India, and depicts scenes from the Indian epics, and human beings in sync with nature.

Usually painted by the women of the village, Madhubani was originally a form of wall art, which used plant-based colours on freshly mud plastered hut walls. However, in recent years, the artists have moved to mediums such as cloth, handmade paper and canvas. This shift to other mediums was also accompanied by greater diversity in the themes depicted. This transition in medium and themes was brought about by a drought that hit Mithila in 1966. Government officials on relief work in the region were wonderstruck by the beautiful painted walls in the region, and encouraged some of the women to showcase their art in paper. Madhubani painting has gone from strength to strength since then.

Today’s live performance at the Isha Yoga Center is Villu Paatu, which literally means “Bow Song.” This thousand-year-old folk music tradition turns a warrior’s weapon into a musical instrument, and uses the bow to create music. The two ends of the bow are tied with a strong, high-tension string, and with the bow rested on the neck of a large earthen pitcher, the musician strikes the bow to create music. Numerous bronze bells hanging from the bow, and supplementary instruments like the udukku, kudam, thala and kattai add to the melody.

Villu Paatu is kept vibrantly alive today by artistes such as Subbu Arumugam, who is known for the verve and liveliness of his performances. Subbu Arumugam has been performing Villu Paatu for close to 50 years, and serves as the chief vocalist and main story-teller of his group. He is also a poet and prepares the scripts himself. He has performed a variety of themes, from the Ramayana and Mahabharatha, to themes involving social upliftment like tree-planting and pollution control. Villu Paatu has also been a powerful medium to carry messages to rural areas of Tamil Nadu. At the request of the government, Mr. Arumugam has performed several community-oriented programs such as family planning, AIDS awareness and old age literacy.

The group started with a beautiful song about the Velliangiri mountains, the Kailash of the South and Isha. They began telling the interesting story of how Villu Paatu originated, and the theme of the program was the wedding of Devi Meenakshi and Madurai.

Navratri Celebrations 2013 - Index
Day 1
Day 2
Day 3
Day 4
Day 5
Day 6
Day 7
Day 8
Editor's Note: India is a land of many goddesses – wonderful ones, wise ones and wild ones. Find out how worship of the feminine still lives in the world in some unlikely places, and what it takes to walk with goddesses like Bhairavi, Kali & Chinnamasta. Only on Sadhguru Exclusive! Watch now.

Indian Culture
Linga Bhairavi
Related Content
article
Navratri - All About the Festival, Traditions, Sadhana, Quotes and More
Navratri is a celebration of the divine feminine that is replete with rich traditions like golu and dandia, elaborate rituals of worshipping Devi, and powerful sadhana that one can use for their spiritual growth.
Mar 12, 2022