Facts, updates, photographs, videos, maps, travelogue, live social media feeds... everything you would want to know about the Rally for Rivers campaign in one place!

After nearly two months of hectic activity and build-up, the D-Day is finally here! The massive ‘Rally for Rivers’ road trip will kick off today from Coimbatore at VOC Grounds.

Ever since Sadhguru announced a few months ago that he would be undertaking a rally to create awareness about the urgent need to rejuvenate our rivers, people have spontaneously joined the movement. People from all walks of life – governments, security forces, entertainers, sportspersons, celebrities – all have shared the message and pledged their support to this campaign. Hordes of people have conducted sessions in schools, colleges and offices, stood in street corners holding up the ‘Rally for Rivers’ placards... making sure that everyone in this country understands the necessity for this people’s movement and makes a missed call to register their support.

The support which started as small streams has fed the river, and it has now gained tremendous force! It is now time to forge forward. Bharatam Mahabharatam!

The very first event of the Rally for Rivers was an exciting affair. Held at Coimbatore’s VOC Grounds, it was attended by over 10,000 people, who were enthusiastically responsive.

On the dais were the Hon’ble Governor of Punjab, Sri VP Singh Badnore, Union Minister Dr Harsh Vardhan and Tamil Nadu cabinet minister for Rural Development & Municipal Administration, Thiru SP Velumani. Also in attendance were a constellation of sports stars: ace batsman Sri Virender Sehwag, women’s cricket team captain Mithali Raj and Formula One race car driver Narain Karthikeyan. Among other dignitaries were Veejay Ram Nakra, representing the rally partner, Mahindra Group; and Dr K Ramasamy, Vice Chancellor of the rally’s technical partner Tamil Nadu Agricultural University.
“I have not come here as an Environment Minister, I am here as a soldier of this movement. I am not only here but will also welcome Sadhguru in Delhi on 2nd October,” said the Union Minister of Environment, Forest and Climate Change, Dr Harsh Vardhan. "Today, Sadhguru is only trying to remind us about our duty towards our children. This is for our children, for the next generation. I am sure after a couple of years when this movement grows in its full form with Sadhguru's blessings, the whole country and one hundred and twenty five crore Indians will be proud of it,” he added.

Sadhguru said, “This is not a protest nor is this an agitation. This is the campaign to raise awareness that our rivers are depleting. Everyone who consumes water must Rally for Rivers.” Speaking of future generations, he said, “As citizens of India, we need to express our responsibility and change the existing situation of our rivers. How our parents have left the rivers for us, at least that much we should restore before we leave. For the wellbeing of the nation, for future generations and for our generation, let's stand up and make this happen."

The Union Minister officially flagged off the rally, which will culminate on October 2, after covering 16 states and 23 events in major cities, traversing a stretch of 7000 km across India. 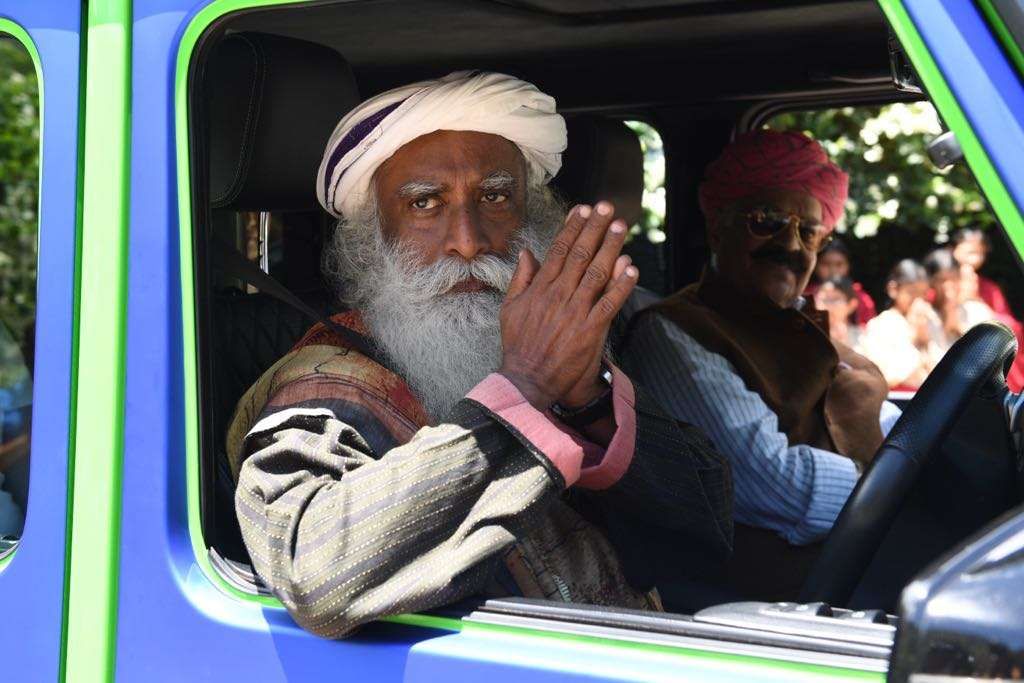