Sadhguru speaks about the Spanda Hall, at the Isha Yoga Center in India, and its place in the intricate system that also involves Dhyanalinga and Linga Bhairavi.

Sadhguru speaks about the Spanda Hall, at the Isha Yoga Center in India, and its place in the intricate system that also involves Dhyanalinga and Linga Bhairavi.

When we consecrated Dhyanalinga, the southwestern corner of the premises becoming Linga Bhairavi was always on my mind. I think I spoke about it a couple of times but at that time, we neither had the means nor the time on our hands to do it. But it was essentially planned this way.

Dhyanalinga is like a womb. It is the yoni of the Devi. The word yoni describes a womb. In Sanskrit and most indigenous languages, there is no equivalent word for vagina. It is only when somebody’s intelligence gets hijacked by his hormones and he starts thinking sexually, that he thinks of a vagina as a separate part. Otherwise, yoni means it is a womb. It was seen as a sacred space that all of us have to inhabit in the most crucial part of our making when we have nothing in our hands. At that time, when everything is in the hands of nature, that space protects us and makes us. This was held as the most sacred space.

Linga Bhairavi was always a part of this triangle. It is just that we had not created an official space yet. Earlier, in some way – not in terms of Dhyanalinga, he is complete by himself – but as a space, this was slightly incomplete. With the completion of Linga Bhairavi, this is a complete system now. The triangle of Linga Bhairavi is the pubic triangle of the Devi, the Dhyanalinga dome is the inside of the womb and the Dhyanalinga is inside it. The first, life-generating reverberation that happens out of this is called Spanda, and that is why the Spanda Hall is situated the way it is. 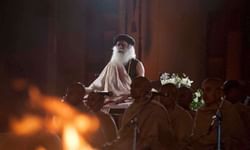 Glimpses of the Beyond
The Dhyanalinga consecration took over three years of very intense work. Sadhguru speaks about the fundamental pro...
Ebook 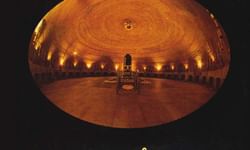 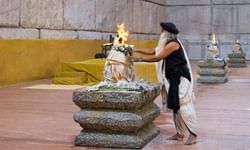 Suryakund Consecration
In December 2012, the Suryakund was consecrated by Sadhguru through prana pratishtha. Here are highlights from the...
Close