Over 500 meditators from the US and around the world joined Sadhguru at the Isha Institute of Inner Sciences for the weeklong Sathsang In the Presence of the Master. Expectant faces were welcomed by a beautiful wet green spring in the mountains of Tennessee, with the many bulbs and shrubs planted over the winter beginning to bloom. Excitement continued to build as no schedule was announced - Sadhguru was keeping everyone, including the organizers, in suspense about any plans for the week. 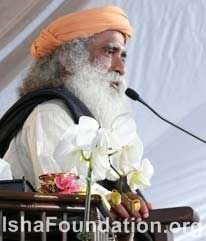 The residents of the ashram and a few other volunteers worked overtime for weeks in advance to get ready for the largest program IIIS has ever hosted. One resident commented, "My intensity rose to such a pitch just by the amount of work and the short amount of time to get ready for the Sathsang. It's shown me how important it is to get to that level of intensity because, for the first time, I was able to put myself aside and just do what was needed without my personality and emotions getting in the way. For the first time I just felt like a piece of life. That experience alone has been immensely freeing."

The level of intensity required of everyone participating was immediately established by the diet - two meals per day of very simple, primarily raw food - and the instruction to add several hours of specific sadhana to the normal daily practices. Participants were then asked to be in silence, and to everyone's surprise this instruction carried over five full days.

Another participant, who just completed Inner Engineering, related that he was "expecting a vacation. I didn't know what I was getting into. I didn't know how I could do all the practices, but somehow I did, and I felt such increased energy afterwards. The big day for me was during one particular meditation. I was just expanding outwards. It was something I didn't think I could feel at this level of experience. It totally blew my mind and opened me up." Another new meditator said, "When I got here I was a certain way, and each day I would see something new about myself, and look back and see that I had made a significant shift from the day before. And Sadhguru offered me some of my first experiences into that inner dimension that I've always heard about but never experienced. It's given me a glimpse into what's possible within me."

Sadhguru addressed a wide range of topics, starting with the importance of the three "I"s in our personal growth: instructions, integrity, and intensity. He answered questions and spoke about devotion, the unique qualities of kriya yoga, the spiritual possibilities of art, the birth of the cosmos, and the physiology behind ecstatic states that yogis experience. A Detroit meditator said that "all of what he said this week gave me a lot of clarity. The explanations and level of detail explained a lot of things that I had wondered about for years." A very new meditator, who had been on the verge of leaving in frustration and confusion after three days, shared that Sadhguru ended up "answering a lot of my questions, and I just felt the overwhelming love and care. I was so relieved that I didn't have to give up this thing that I thought I'd found… I cried myself to sleep that night that I could keep it. Now I understand the involvement from everyone and feel the togetherness and love so much."

At one point during the week, Sadhguru invited participants to share with each other the purpose this type of Sathsang and retreat served for them. A wide range of responses made very clear the huge spectrum of people that were participating in the event - from "old-timers" and core volunteers to brand-new meditators who were still scared and skeptical. Somehow Sadhguru united them all and gave each person exactly what s/he needed, without leaving anybody out. A meditator from Ann Arbor, Michigan, said, "For me, the energy level was the highest of any program I've ever been at. Another thing that really struck me was that so many people were synchronized in their thinking, like they were reading each other's minds. More than once I had a thought like, 'I wonder if those people need such-and-such-a-thing.' So I would take it over and just as I was walking up they would turn and ask if I could go find the very thing that I was bringing them." Another meditator shared a similar experience and commented, "In my experience, everything that happens here happens for a reason, happens to teach you something. When you start to perceive that, every minute becomes a miracle. That happened all the way throughout the Sathsang."

Outside of the sessions with Sadhguru, meditators volunteered in various activities around the center. The weather created its usual challenges - it's almost expected to receive wind and rain now during a program in Tennessee! Somehow the program and dining tents stayed up through the onslaught, and overflow participants, who were sleeping in the tents at night, found spaces in the lodges. The sun did shine at many moments, and one meditator spent some time outside looking intensely at a simple yellow wildflower. "I noticed there were so many details to this simple yellow flower…that it was no longer a simple yellow flower. The Creator had put so much attention into all the details. Soon I found myself falling in love with this flower. And soon after that, merging with it. Being totally with this flower offered me the experience of losing myself with an element of nature." Even the rain and mist created a mystical atmosphere for the event. Bonfires were built at night and guitars and songs filled the air several times throughout the week.

A highlight for many was a hike with Sadhguru that wound down the mountain through the sparkling green forest to a cold, clear stream running through the valley. Meditators cleared brush so that all could sit in a circle around Sadhguru, who led the gathering in meditation from his seat on a rock in the middle of the stream. One of the videographers noted that when Sadhguru closed his eyes he was as absolutely still as the rock he was sitting on. A meditator across the stream watched Sadhguru breaking twigs into tiny pieces, throwing them into the stream, and watching as they drifted to the other side. She felt as though she was that twig, and saw him taking her, and every other twig and vermin, to the other side. An impromptu game of "fruitball" started up as bags of oranges and pears came out and Sadhguru became center, forward, and point guard from his perch on the rock. One hiker was amazed that the energy was such that he never felt tired even at a very accelerated pace, and he even played Frisbee with Sadhguru upon returning.

Participants were treated to a sneak preview of the upcoming film that was produced in conjunction with the new book Midnights with the Mystic. Sadhguru told the crowd that the book has been carefully designed to touch Americans and that the impact, if we can reach a broad audience, will be enormous. He further explained that he is focusing so much on America because the country is in a unique position where it is capable of transforming the entire world because of its influence in almost every sphere - and that if a certain percentage of Americans become meditative, there is the possibility of changing the world to a significant degree in a matter of 10 to 15 years. The implications of these words left every person in the room overwhelmed with excitement and eagerness to help make this happen.

As part of the growing presence of Isha in the US, a very significant step for Isha took place during the course of the week as 31 US and Canadian meditators received training to conduct Sathsangs in their home cities. Never before has any teacher training been offered outside of the Isha Yoga Center in India, but the longing of so many meditators and a certain maturity in the US situation finally allowed this initial training to happen. "The training was both extremely challenging and intensely beautiful. I was truly moved by the way all the Sathsang teachers in the training threw themselves into it totally, recklessly, with their whole hearts. I feel deeply privileged to be a part of something so important, and I am continually humbled by Sadhguru's overwhelming dedication, and his silent, unending Grace," said one meditator of the process of training. Another added, "To see the enthusiasm, the whole range of emotions, and the energy that people have to really spread this across the country was exciting to see, as well as to know we're prepared and ready to handle the next step with the book release and the dome consecration in November."

Sadhguru named the Sathsang teachers Ishangas, explaining that anga is the Sanskrit word for "limb." He impressed upon them their great responsibility by saying that no matter the intent of the head and heart, the body will follow the direction of the limbs. He then honored the American Ishangas (36 in total) by giving them a sacred cloth, dyed with the mud from the Mahima site, that they will wear while conducting Sathsangs. One of the Ishangas shared, "I feel we're at this turning point, not only in the US but in the world. It's going to be huge. I feel so humbled, so humbled and grateful to be part of this - this thing that's going to change the whole world."

Sadhguru also announced that the consecration of the Mahima dome would probably take place during the first or second week of November. He implied that this would allow more intense energy situations, because a tent doesn't provide the necessary atmosphere to do certain things. Even with Mahima built, he said that would not make an ashram, but that the yogic culture is slowly being introduced as the center grows. And, just as at the Yoga Center in India, the idea of samskriti - doing everything well - would be at the core of the developing IIIS culture.

At the end of the week, many participants were still digesting the enormity of what transpired. A California meditator shared her exhilaration: "I'm finally undoing myself; I'm really starting to feel who I am. I wasn't really living before; I was just going around, cluttered by this web of attachments and identifications, in a very tiny bubble. Sadhguru is showing me that there is a universe inside me. I've been overwhelmed by just a stream of reality and truth awakening me. I've never felt so alive."