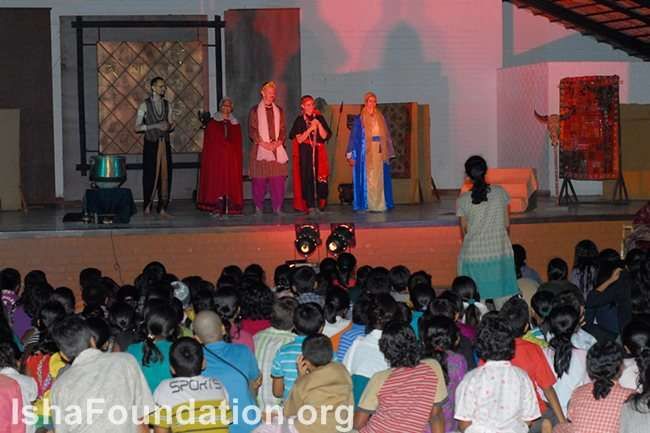 The full ensemble - Macbeth with the three witches, guided by the goddess Hecate

Macbeth is Shakespeare's most gory and violent tragedy, starring the famous anti-hero Macbeth, Thane of Glamis, Thane of Cawdor, and later King of Scotland. He is a brave soldier, loving husband, an ambitious warrior, a heartless murderer, and finally the face of pure evil. He stands alone in the Shakespearean canon as an example of one’s “fatal flaw,” in his case his “vaulting ambition” and greed, made unstoppable by the sinister influence of the “three weird sisters,” the three witches.

These harbingers of destruction and chaos are Shakespeare's most enigmatic and much analyzed characters. Are they evil personified? Are they merely the reflection of Macbeth's vicious traits, or are they creatures who have sold their eternal souls to the devil himself in return for unearthly powers? Whatever they might be, their powerful influence on Macbeth and therefore the destiny of Scotland is undeniable. Spurred by them and their prophecies, Macbeth kills again and again – to become the king, to secure his crown, to suppress his detractors. However, the path that he is on leads to annihilation of all that is his – his crown, his kingdom, his wife, his life, his very soul.

Act 4, Scene 1 depicts a powerful yet fatalistic moment in the play. Macbeth comes to meet the witches for the second time, little knowing that like all predators, they too are plotting his utter ruin. Flushed with kingly arrogance, he seeks to dominate them with his power and force for them to reveal his future. They acquiesce, gratifyingly so, by conjuring otherworldly apparitions who bolster his spirits with seemingly unassailable predictions. But they also confirm his fears of losing his throne to another's offspring.

Empowered by prophecies that seemed to grant him safety and security from all mortal dangers, he then takes action to secure the throne for his lineage by indulging in mindless mayhem. But alas! As the play draws to a close, he realizes that he has been tricked most foully and meets his fate as a soldier, honorable again.

The timeless quality of the play is a testament to the genius of Shakespeare, who uses Macbeth as an example to depict never-ending struggle between good and bad, high and low within each individual. Macbeth's hopes are an echo of our aspirations; his struggles, a reflection of our efforts to achieve them; his surrender to the base, an image of our human weaknesses; his defeat, a warning to all to adhere to the right and pure. (This is all Shakespeare’s )

The presentation started with an explanation of the story and a special note that artistic license was exercised by making the setting Indian! After all, India itself has a rich repository of the supernatural.

Teachers of the school, dressed in the garb of occult practitioners, with striking make-up, gave an excellent rendition of the three witches. With cackles of pure glee, they brewed a horrible potion comprising of obnoxious ingredients under the guidance of their goddess, Hecate. The highlight of the performance was their “witch-ly” dance, their “antic round” to a suitably eerie music.

However, the showstopper was Macbeth himself, whose regal and menacing entry made the audience gasp and then give a thunderous applause. He veered between arrogance and insecurity, hope and despair and spouted Shakespeare with the ease of a thespian.

The presentation was made all the more interesting by using different colored lights to indicate the mood and atmosphere of the moment. Thunder, strange sounds and trancelike music emanated from back stage, virtuousically controlled by Isha Home School teachers.

The success of the presentation was evident when the audience remained seated in anticipation of the next scene after the lights faded out at the end. When finally realizing that the evening had come to a close during the curtain call, they gave an enthusiastic ovation to all. A few students lingered behind to go up to the performing teachers and interact with them, expressing admiration and excitement.

Who would have known that the evening was born from a simple desire to make the students’ lesson more interesting!?

Involvement
Isha Home School
Related Content
article
Navratri - All About the Festival, Traditions, Sadhana, Quotes and More
Navratri is a celebration of the divine feminine that is replete with rich traditions like golu and dandia, elaborate rituals of worshipping Devi, and powerful sadhana that one can use for their spiritual growth.
Mar 12, 2022