7 Things You Didn't Know About The Mahabharata

Who fought the first battle of Kurukshetra before the Pandavas and Kauravas, why was Duryodhana’s wife Bhanumati a devotee of Krishna, and other interesting facts from the Mahabharata.

Who fought the first battle of Kurukshetra before the Pandavas and Kauravas, why was Duryodhana’s wife Bhanumati a devotee of Krishna, and other interesting facts from the Mahabharata.

#1 The Mahabharata was originally known as Jaya

Originally composed by Veda Vyasa, the narrative of the Kurukshetra War between the Pandavas and Kauravas was first known as Jaya. The work was later expanded by two of Veda Vyasa’s disciples, with Ugrasrava producing the Mahabharata as we know it today.

According to legend, Sage Vyasa narrated the story of Mahabharata to Ganesha in a cave located around 3kms from Badrinath, which is today known as “Ganesh Guha.”

Sadhguru: Energy-wise if you’re vibrant beyond a point, then the cobra’s venom works in a completely different way on the system. You might have heard traditionally, some of the Siddhas use this. If somebody is poisoned then they will take many bites from the cobra and they will recover. One famous case in history is Bhima. He was poisoned and then put in a river where snakes bit him repeatedly and he recovered from the poison that he had eaten.

#4 Duryodhana’s wife Bhanumati was a devotee of Krishna

Sadhguru: Once Krishna was Duryodhana’s guest in his palace. In the night Duryodhana had planned to get Krishna a little drunk and get some kind of commitment from him. His friends came and everybody drank too much and they all went out of control. Krishna maintained his cool and he went about meeting everybody, charming everybody. Bhanumati also in this whole enthusiasm consumed more than she should. So Banumathi lost control over herself and she just came and fell on Krishna, expressing her desire for him. So Krishna just held her like he would hold a baby, carried her to Gandhari’s chambers and handed over the girl to her. Next day morning she was absolutely grateful to him for having done this and from then on she was like a devotee of Krishna.

According to the story, Shakuni and Dhushasana had planned to kill Bhima through black magic with the help of a tantric named Maha Agori. However, Bhima came to know what was happening and thwarted their plans just in time.

#6 Bhishma and Parashuram fought the first battle of Kurukshetra

When Bhishma refused to marry Amba because of the vow he had taken, Parashuram called him to battle - an epic combat between guru and disciple on the battleground of Kurukshetra, which would be a foreshadowing of the massive war much later. The battle ended without a clear victor, thus Parashuram decided to bless his student and went on his way. 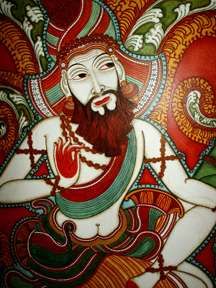 Sadhguru: Atri, one of the Saptarishis, played a very important role in bringing peace when the Kurukshetra war happened. When he saw a matchless warrior called Dronacharya who went about in indiscriminate slaughter, Atri went and stopped him. It was Atri who reminded Dronacharya of his dharma and made him withdraw from the war. So Atri brought peace or helped to stop the most brutal war that this land has ever seen.

Editor’s Note: Watch the Leela series, where Sadhguru explores the life and path of Krishna.

Mahabharat
Related Content
article
Navratri - All About the Festival, Traditions, Sadhana, Quotes and More
Navratri is a celebration of the divine feminine that is replete with rich traditions like golu and dandia, elaborate rituals of worshipping Devi, and powerful sadhana that one can use for their spiritual growth.
Mar 12, 2022