Cauvery Calling is a 12-year mission to restore the mighty river to her original glory. Launched last September, the movement has made significant headway – locally and globally. State governments have expressed support, farmers have enrolled into the idea and UN bodies have backed its complementary model that marries economy and ecology. But what has been happening in the lead-up to this first Planting Season? How has the pandemic impacted Cauvery Calling? Read on to find out.

“Most of the blood flowing in my body is Cauvery. For a large number of Tamil and Kannada people, their blood and body is Cauvery. I have lived off this river many times by myself… I never experienced the river as some kind of a natural resource. I just saw it as a life beyond me, a much bigger life than who I am, and much more enduring. People like you and me come and go, but she has been flowing for a million years.”– Sadhguru

In September 2019, Sadhguru undertook the massive mission to revive the Cauvery River and Basin, and launched the 12-year-long Cauvery Calling Movement. Leading a motorbike rally from Talacauvery, the origin of the Cauvery, to Thiruvarur, where she meets the sea, Sadhguru rode to generate awareness about the urgent need for action on the part of our generation. 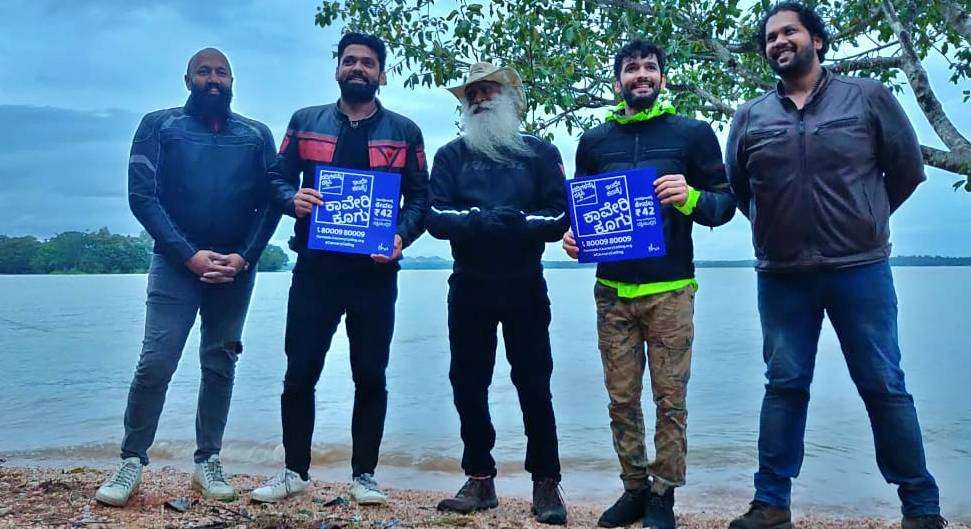 The Cauvery Calling Movement is an off-spring of the massive Rally for Rivers Campaign – a nation-wide call for the Rejuvenation of Indian Rivers. With over 162 million people participating, the month-long campaign in 2017 generated overwhelming support from the people of India and across the world. Bringing focus to the River Cauvery, which has faced severe depletion of over 40% in 70 years, this widespread People’s Movement aims to revitalize the river and the life it supports. The project seeks to rejuvenate the Cauvery Basin by urging and supporting farmers in the Basin districts in Karnataka and Tamil Nadu to make a partial shift from conventional agri-crops to perennial Agroforestry.

The vision is to facilitate the planting of 2.42 billion trees in the river basin, which will improve soil health and increase water retention, while improving the income of farmers by 3-8 times in 5-7 years, and transform the lives of 84 million people.

The Project’s core methodology of River Revitalization through the economically viable process of tree-based agriculture or Agroforestry has achieved warm appreciation and recognition from some of the most important ecological platforms worldwide.

This model, which in Sadhguru’s words ‘marries Ecology with Economy,’ has been presented and acclaimed at significant forums such as UNCCD, UNEP, UN Climate Action Summit in New York and World Economic Forum (WEF). UN Environment's Compendium on Nature Based Solutions for desertification included the model articulated by Isha’s environmental projects.

All Hands On Deck!

Even as the motorbike rally traced the course of the Cauvery, simultaneously a massive farmer outreach program was carried out in August and September 2019; our volunteers reached out to about 2,70,000 farmers in 7,000 villages in Karnataka and Tamil Nadu.

In the following months, from December 2019 to February 2020, this was followed up with a series of ground level awareness and training programs.

Through this period, support and donations streamed in from the world over – more than 6 lakh individuals from across 140 countries expressed solidarity and contributed to make the massive project possible.

However, a few months into 2020, disruption came in the form of the COVID pandemic, and teams had to rapidly innovate to stay on target. The initial plans included mobilizing farmers through large scale training events across all nine Cauvery basin districts followed by taluk level training programs and on-ground exposure visits to model farms. These had to be set aside.

The core team re-strategized and shifted focus to what could be achieved through digital and electronic means and through traditional media. Every possible avenue to spread the message was explored.

Communications went out through Farmer Whatsapp groups, Facebook groups of Farming Communities, via SMS campaigns, local media and press, and through a massive reach-out through individual farmer leaders and influencers. This exhaustive outreach campaign reached an estimated 50 lakh people.

An interactive system was also put into place: a 12-hour farmers’ helpline was set up. Farmers were given the number 80009 80009 and over 120 trained volunteers prepared to answer farmers queries in Kannada and Tamil between 9 am and 9 pm every day. To date, the helpline has fielded over a whopping 26000 queries, and volunteers have been responding to questions, addressing farmer concerns as well as helping them locate nurseries closest to them.

This was crucial in mapping the system of supply and demand across the 29 Basin Districts and 166 taluks in the two states where the project is spread.

Enormous support for the cause of Agroforestry came from the Forest Department of the Karnataka Government. The state already had an existing scheme called the Krishi Aranya Protsaha Yojane (KAPY), which dovetailed seamlessly with Cauvery Calling’s move towards Agroforestry.

KAPY was involved in preparing approximately 70 lakh saplings from the high value and lucrative species list as recommended by the project’s technical teams. In a highly commendable and proactive move, the State Government also accepted the recommendation to increase the incentive for farmers from Rs 100 to Rs 125 per surviving sapling, so as to further ease farmers’ partial shift to tree-based agriculture. This incentive is crucial to tide the farmer through the initial three years of plantation till such time that they can start enjoying the yields.

In Tamil Nadu, Isha’s nurseries – with 15 years of experience behind them – worked in full swing from December 2019 onwards to prepare saplings for the upcoming monsoon planting season. Across 36 nurseries, close to 23 lakh quality saplings have already been produced, and an additional 17 lakh will be ready by the end of September 2020.

In spite of the pandemic, the nursery activity continued. Although the sapling distribution points were closed in line with government directions, the saplings were tended by one or two persons who lived in each of the Isha nurseries permanently. The nurseries have since reopened in full strength after permission was granted.

So far, timber species teak, red sanders, mahogany, sandalwood, African mahogany, Melia dubia and rosewood have been popular with the farmers. Among the non-timber saplings, neem, almond, jackfruit, gooseberry, pomegranate and jacaranda have seen the most uptake.

In terms of numbers, the Cauvery Calling teams were prepared for a slow start. Sapling production was aimed at a conservative figure for the first year, which was further impeded by the COVID situation.

However, the relentless efforts of on-field volunteers, the tremendous support from Karnataka Government officials, individuals from the field and academic circles and, above all, the infectious enthusiasm shown by the farmer community proved that this caution was unfounded.

With more than 50 lakh saplings picked up from Forest Nurseries in Karnataka and incessant demand for saplings in Isha’s nurseries in Tamil Nadu, we are well on our way to achieving our target. About 11 million saplings will be planted on Cauvery Basin farmlands by the end of this first season.

This is what it takes on the ground. Undaunted by torrential rains and the pandemic, #CauveryCalling team has been working in the Cauvery Basin districts to support sapling distribution for farmers. Their relentless commitment is Inspiring. Congratulations. –Sg pic.twitter.com/wtMAMxXaOH

As with every other area of life, the pandemic disrupted plans and the progress of Cauvery Calling teams. All on-ground activity came to a standstill and work was taken up digitally. After the lifting of the lockdown, Nadi Veeras were each obliged to spend a precious fortnight in mandatory quarantine before they could move about in the various districts and start facilitating sapling uptake.

In other challenges, more recently, copious rainfall has damaged some saplings in nurseries in Chikmagalur and volunteers are making desperate efforts to preserve them and transport them to areas of greater demand and quicker uptake.

Well Begun is Half Done

In spite of the vagaries of this first year, it has been a time of substantial learning. Our teams have acquired a lot of on-ground wisdom about farmer needs, factors that influence their choices and decisions, and the various geographic and social nuances that need to be factored in for such a large movement to be successful.

In spite of the troubles, the unimagined success of this first season has indeed put wind under the wings of the Movement. Plans for exponential growth in the second season are already being formulated.