We look at the significance of Kedarnath temple, one of the twelve Jyotirlingas, and how it has been a space energized by thousands of mystics and yogis over the ages

Sadhguru: Kedarnath is a tremendous space. The utterance of the sound "Shiva" attains a completely new dimension and significance in Kedar. It is a space which has been specially prepared for this particular sound. When we utter the word "Shiva," it is the freedom of the uncreated, the liberation of one who is not created. It is not right to say this, but it is almost like on this planet, the sound "Shiva" emanates from this place. For thousands of years, people have experienced that space as a reverberation of that sound.

When we say "Shiva," it is not about creating one more idol or god that we can ask for more prosperity or better things in life. The word "Shiva" means "that which is not." Today, modern science is proving to us that everything comes from nothing and goes back to nothing. The basis of existence and the fundamental quality of the cosmos is vast nothingness. The galaxies are just a small happening – a sprinkling. The rest is all vast empty space, which is referred to as Shiva.

A heady mixture of energies

Kedarnath is a very heady mixture of energies. This is a place that has witnessed thousands of yogis and mystics of every kind. When I say every kind, you cannot imagine those kinds. These are people who made no attempt to teach anything to anyone. Their way of making an offering to the world was by leaving their energies, their path, their work – everything – in a certain way in these spaces.

Adishankaracharya was last seen at Kedarnath, before he set off into the mountains. This wall with a hand and staff marks the spot.

When you think of someone on the spiritual path, you would probably think of them within a certain kind of framework in terms of a certain kind of behavior, dress or speech. But this is not a land of just that kind of spiritual person. The kind that fits into your ways of understanding has been here. But there have been many more who are utterly wild, whom you can never recognize as spiritual. But these are people who have touched the very peaks of existence. When we say “a yogi,” we do not mean someone of a certain behavior or morality. A yogi is perfectly in tune with life. So tuned in that he can dismantle life and put it back together again. The fundamental life that is you, if you can dismantle that completely and put it back, only then you are a yogi. There have been many such incredible human beings.

For a person who is seeking some kind of spiritual uplift, Kedar is a boon whose proportions you cannot imagine. That’s how it is, if one is open to this. It is very difficult to explain what it means. After all, it’s just a mountain, an outcrop of rock. But what makes an enormous difference is what has done to the space by the type of people who lived here for thousands of years. This is the place where so many yogis shed their bodies. It is something you must experience. After being born in India, before you are too old and no good for anything, you must make it once to the Himalayas.

The Hump of the Bull

There is a legend that after the Kurukshetra war, the Pandavas were very affected because they had killed their own kinsmen – their own brothers and relatives. This was called Gothravadha. They felt guilty and soiled by this act and were looking for a way to absolve themselves of it. So they went looking for Shiva.

Shiva did not want to give them the pleasure of suddenly becoming free from this horrible act, so he converted himself into the form of a bull and tried to escape. But they espied him and followed him to try and catch him. Shiva went into the ground and when he came up, different parts of the body came up in different places. The forehead is Pashupathinath in Nepal, considered as the most significant. The hump of the bull is Kedarnath, the two forelegs are Tunganath, which is on the way to Kedar. The navel appeared in a place in the Indian part of the Himalaya called Madhya-Maheshwar which is a very powerful Manipuraka linga, and the matted locks of Shiva appeared in what is called Kalpnath. Like this, different parts of the body appeared in different places. 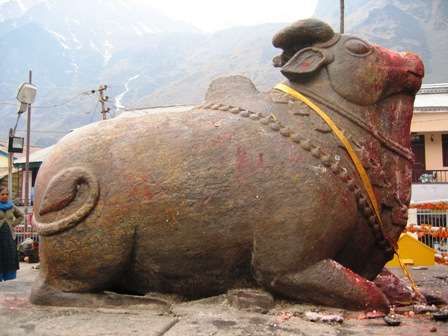 The sacred Nandi at Kedarnath temple

This description of body parts has something to do with the seven chakras. These temples were established as a human body. It was a great experiment – trying to create a huge body with a tantric possibility. One such body happened in the direction of the Indian Himalayas. Another such body flowed towards the western direction where they tried to convert Nepal itself into a body.

The legend goes that Shiva and Parvati lived on the banks of Kantisarovar, and in Kedar, there lived many yogis whom they would visit. Kantisarovar is the lake that burst out and came to Kedar during the 2013 floods. Today, it is being called Gandhi Sarovar. It is actually Kantisarovar. Kanti means grace, sarovar means a lake. It is a lake of grace. In the yogic culture, Shiva is not seen as a God. He was a being who walked this land and is the very source of the yogic traditions. He is the Adiyogi or the first yogi, and also the Adi Guru, the first Guru. This first transmission of yogic sciences happened on the banks of Kantisarovar, where Adiyogi began a systematic exposition of this inner technology to his first seven disciples, celebrated today as the Sapta Rishis.

Many years ago, I used to travel alone for a month or two every year in the Himalayas. At that time I just went by myself, by local bus. Generally I sat on top of the bus and went because I didn’t want to miss the mountains. These were crazy buses! They started at 4 or 4:30 in the morning from Haridwar and went straight to either Gaurikund or Badrinath. They didn't stop anywhere except to pick up and drop people – not even for food. They used to be called Bhook Hartal buses, which means “hunger strike” buses. The driver would have his rolled up chapatti which he eats as he is driving while you sit there wondering about lunch!

When I got to Kedar after a long trek from Gaurikund, I heard about Kantisarovar, so one afternoon, I set forth around 2 or 2:30 p.m. and got there in little more than an hour’s time. There was the lake and snow-capped mountains around it. In terms of nature, it is fantastic – this huge lake of absolutely still water, no vegetation and all the snow-covered peaks reflecting in the totally still water. It was an incredible place. 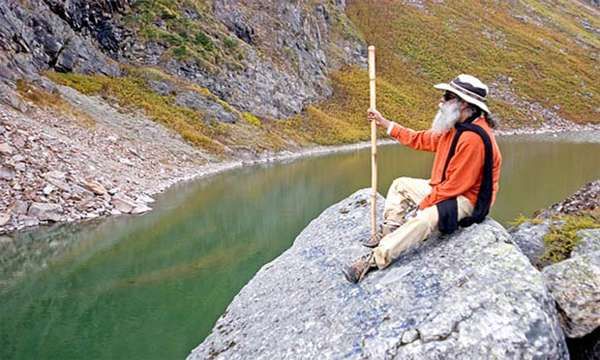 Sadhguru at Kantisarovar, where the first transmission of yogic sciences took place.

I just sat there, and the serenity, silence and purity penetrated my consciousness. The climb, the altitude and the desolate beauty of that place left me breathless. I sat in that stillness on a small rock with my eyes open, imbibing every form around me. The surroundings gradually lost their form and only nada – sound – existed. The mountain, the lake and the whole surroundings, including my body, did not exist in their usual form. Everything was just sound. Within me a song arose: “Nada Brahma Vishwaswaroopa.”

I am somebody who always avoided learning the Sanskrit language. Though I like the language very much and I know the depth of the language, I avoided learning it because the moment you learn Sanskrit, you will invariably end up reading the scriptures. My own vision has never failed me in anything even for one moment, so I did not want to clutter myself with scriptures and all these traditions. So I avoided Sanskrit.

Nada Brahma simply means experiencing the world as a sound, not as a form. Modern science also says that every sound has a form attached to it, and every form has a sound attached to it. This is a scientific reality. And today we also know that there is no such thing as matter anymore as far as science is concerned. Where there is a vibration, there is bound to be a sound. So in yoga, we say the whole of existence is sound.

Sacred Spaces
Shiva
Spirituality
Seeking
Energy
Great Beings
Wisdom
Related Content
article
Mantras Explained - Benefits of Chanting Mantras and the Science Behind It
Mantras are one of the most misunderstood aspects of Yoga. Sadhguru explains how a mantra is not just a sound that you utter but something that you strive to become.
Jul 21, 2020
article
Mount Kailash – The Greatest Mystical Library
Sadhguru speaks about Mount Kailash, the great repository of mystical knowledge, and explores what it really means to stand before the abode of Shiva.
May 23, 2014
article
Indian Classical Music and Activating the Chakras
Sadhguru looks at the nature of sound, mantras and Indian classical music, and how classical music is a means to activate the chakras in the body.
Mar 1, 2019
Close