Karma – The Memory of Life

Sadhguru says, karma is not about something good or bad that you did. Karma is the memory of life.

ArticleJul 27, 2013
Sadhguru: The word karma evokes different types of understanding in people’s minds. Karma means action. Action is on many different levels. There is physical, mental, emotional and energy action which we can call karma. If the action sinks deeper than these four dimensions, then we call it kriya. So both karma and kriya mean action, but karma is that kind of action which leaves a residual imprint or impact upon the system. This means the memory and chemistry of that action remains. Kriya is a type of action which imprints itself on a completely different dimension and begins to dismantle the karmic residue that has accumulated in the system.

Karma is of many kinds, many different layers and many different dimensions. The actions that your father performed are working and kicking up within you in so many different ways, not just in your situation, but in every cell in your body. Many of you may have noticed that when you were eighteen or twenty, you rebelled completely against your father or mother, but by the time you were forty or forty-five, you began to behave just like them. You speak and act like them. That is a hopeless way to live because if life is going to repeat itself, if this generation is going to behave, act, live and experience life in the same way that the previous generation did, this is a wasted generation.

But karma is not just yours or your forefathers’. The first single-celled little piece of life, that bacteria or virus’ karma is also acting up within you today. In a normal-sized body you have approximately 10 trillion human cells. But in your body, there are over a hundred trillion bacteria – you are outnumbered one to ten! Just upon your facial skin, there are 18 billion bacteria. Aren't you glad you’re not seeing them?

A significant percentage of you is actually bacteria. And the kind of bacteria that you have carries a certain behavioral pattern depending upon what kind of bacteria your forefathers had. The way the bacteria behave in your body and in some other body is very different and depends upon this memory.

So you inherit even the bacteria with a certain quality. They also carry a certain karmic content and behave and make the quality of your life in a certain way. So karma is not about something good or bad that you did. Karma is the memory of life. The very way the body is structured is because there is memory of life right from that single-celled animal to every other form. It is a medical fact that within your brain, there is a reptilian brain which is almost the size of a crocodile’s brain. Now do you understand why you go snapping at everybody?

All the grand ideas that you had about yourself are very false. This is why we told you, “It is all Maya,” because the way things are happening within you is such that almost everything that you do is controlled by past information.

“Does that mean to say I am hopelessly entangled?” Entangled for sure, but not hopelessly. From being a Pashupata – a composite expression of animal nature – from that single-celled animal to the highest one, there is a possibility of becoming a Pashupati – one can leave all this behind and transcend. Within the human system, the basic skeleton of the system – not the orthopedic skeleton, but the energy skeleton – or the basic blueprint of energy has 112 chakras or junction points where it is held together.

All these chakras function according to the influence of the karmic residue or the past memory within the system which makes this life process happen. But there are two other chakras outside the physical framework of the body which generally remain very minimal or almost dormant in most people. But if you do enough sadhana, they become active.

The 114th chakra pulsates in a certain way which has been described right from ancient times as the Ouroboros – the symbol of a snake swallowing its own tail. You can see this symbol in almost every ancient culture. In India you can see it all over the temples, you can see it in Greece, Egypt and in Mesopotamian temples – almost everywhere. You can see the Ouroboros in all ancient cultures which were focused more upon the beyond than what is here.

Today, modern mathematics uses the Ouroboros as the sign of infinity. So the 114th chakra pulsates in the form of the infinite. And if one’s energies touch this dimension within you, then every action, whatever you do is a process of liberation because action is not yours anymore, it is of infinite nature. If one’s energies are within the 112, every action that you do has a residue, so it is best that you do the right kind of action which leaves a pleasant residue upon you.

Whether activity entangles you or is a process of liberation depends essentially on one’s level of sadhana and also the attitude and the volition with which action is done. If people try to do sadhana without performing the needed activity in their lives, sadhana will be a great struggle.

If you try and sit for twelve hours a day and meditate, initially it will look like a great fortune, but within a month you will go nuts. If you cross that madness, you will cross everything, but most people give up when the madness arises within them, because it is not easy. This is a primal cry of your father, your grandfather, your forefathers and the goddamn bacteria. All of them will scream to find expression. They will not keep quiet. You can obliterate all of them, but it is a hard path which needs a lot of sadhana. Or you can distance yourself from them – let them scream but you are not bothered because you don’t hear. These are two different ways, but you cannot ignore them because they throb in every cell in your body.

To distance yourself from all that takes a lot of work, or it simply takes devotion. If you have to do it by yourself, it takes work. If you want to ride the grace, there is no work but you will not be in the driver’s seat. So you either learn to drive – which involves many risks – or an expert driver will drive and you can sit and doze off in the back seat. As long as you get there, what does it matter how?

Excerpted from Sadhguru’s book Of Mystics and Mistakes. 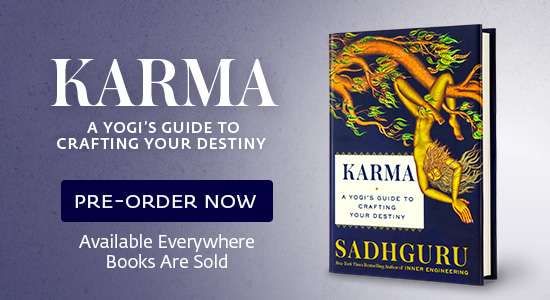 Karma
Memory
Consciousness
Choice
Transformation
Sadhana
Wisdom
Related Content
article
What is Consciousness? 6 Myths Busted and 4 States Explained
Sadhguru defines consciousness and busts some common myths about a much misunderstood topic. Explaining that consciousness has nothing to do with the mind, he outlines different conscious states from a Yogic perspective.
Mar 21, 2021
article
Get A Handle On Your Karma
Describing a term long used and misused in different ways, Sadhguru explains the meaning of karma. Explaining how very deep rooted its influences are, he also shows a way to get a "handle" over the complex structure that it is.
Jun 17, 2013
article
What Is Karma and How Does It Work?
Sadhguru explores the meaning of karma, defining it as a certain amount of information, and then goes on to explain the different types of karma and the role of karma in our life.
Sep 20, 2020
Close