The Making of a Hata Yogi: Align with the Divine

In our series “The Making of a Hata Yogi,” the participants reflect on Sadhguru's Birthday and their experience of asanas.

The Making of a Hata Yogi

The Isha Hata Yoga Teacher Training Program is an endeavor to bring back classical yoga in its purest form and to train teachers who can impart this phenomenally powerful science. The second training program began on 22nd July 2013, and in this series, we will be following the participants through their exciting 21-week journey.

In Week Seven of the program, we take a look at the participants’ perspective of Sadhguru’s birthday celebrations, volunteering for the Bhava Spandana Program, and the immersive experience of the asanas.

Through every asana you are trying to align the inner geometry of your system with that of the cosmic geometry.

Week 7 began with a celebration for the participants of the Hata Yoga Teacher Training Program. Tuesday, September 3rd, was Sadhguru’s birthday, and the festivities included serving food and distributing dhotis to the ashram sevadhars, followed in the evening by a sathsang with Sadhguru.

Participant Leonor describes the evening with Sadhguru: “Usually, the person who celebrates his own birthday is the most excited one and people gather around to share the same joy. If I look back and re-experience that beautiful night, the perception is that on this occasion it happened rather the opposite. The master opened himself up so that everyone could offer their special gifts: songs, recitals, videos, spontaneous dances and questions. A wonderful opportunity for each of them to express love, devotion and gratitude to the master who touched their hearts and transformed their lives.” 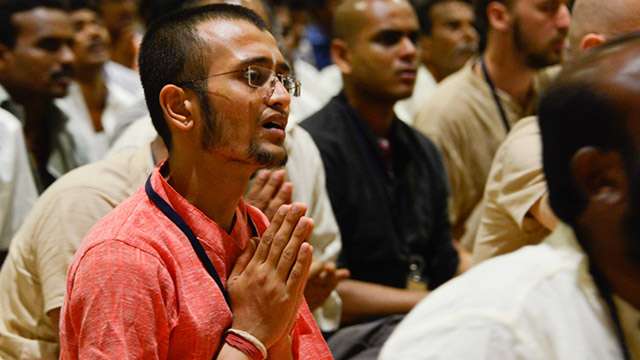 During the week, the men also had a chance to volunteer for the Men’s Bhava Spandana Program at the ashram. The intensity and overwhelming experience of BSP brought forth this poem from Yves Bruggmann.

Transformed by divine fire
Nurtured by mother earth
Purified by water
Inspired by wind
Space giving birth to the storyline of our lives
O’ Brothers and Sisters
Are you willing
To burn the veil of illusion
To immerse into the One?

Vijay, from Mumbai, in fact noticed that one-and-a-half month’s Hata Yoga training had a huge impact on his experience of BSP. “I could give myself all the way and in the end I came out of the hall with no pain at all – all fresh and recharged. It was wonderful!”

Get weekly updates on the latest blogs via newsletters right in your mailbox.
If you want to develop a relationship with the cosmic space, you have to pay enormous attention.

Week 7 has also been a time for the participants to stabilize and establish their practice of asanas. After many days spent preparing the body with Upayoga and Angamardana, the asanas are opening up new experiences for the teacher trainees. Stephanie Ang describes how her sense of the body has evolved in the last few weeks.

“This happened in Trikonasana. I closed my eyes and wanted to turn my foot 90 degrees from the original position and I couldn’t tell at what angle my foot was. That’s when I realized that I have no sense of knowing at all with my eyes closed. So I started to pay attention to the movement and the sensation each time I turn my feet or hands. Somehow the body just recognized and registered the movement and I found myself getting closer to the exact angle each time I practice the asanas. Now, 8 out of 10 times, I can accurately place my foot where it is supposed to be. I can’t believe that in such a short period of time I developed this sense of awareness.”

Sadhguru elaborates on the phenomenal possibility that each asana is:

“Through every asana you are trying to align the inner geometry of your system with that of the cosmic geometry. The asana works not just because of the physical angles that you take on. It is the mental focus and slowly, an evolution on the level of your energy. Let us say you do a simple asana like trikonasana. Though you may have been doing it for many years, if you observe your trikonasana with as much attention as you can and every day pay extra attention, you will see in two to three weeks’ time, your asana is actually evolving not just in the perfection of the posture but in the way it reverberates, in the kind of energy that you generate and the extent to which you are developing a relationship with the cosmic space.

Editor’s Note: Isha Hatha Yoga programs are an extensive exploration of classical hatha yoga, which revive various dimensions of this ancient science that are largely absent in the world today. These programs offer an unparalleled opportunity to explore Upa-yoga, Angamardana, Surya Kriya, Surya Shakti, Yogasanas and Bhuta Shuddhi, among other potent yogic practices.