The Making of a Hata Yogi: The Trichy Temple Trail

In Week Nine of our series “The Making of a Hata Yogi,” the participants of the Hata Yoga School visit the remarkable town of Trichy, its temples and other nearby places of yogic significance.

Week 9: The Isha Hata Yoga Teacher Training Program is an endeavor to bring back classical yoga in its purest form and to train teachers who can impart this phenomenally powerful science. The second training program began on 22nd July 2013, and in this series, we will be following the participants through their exciting 21-week journey.

In Week Nine of the program, the participants went on a pilgrimage to places of yogic significance in and around the wonderful town of Trichy.

For the participants of the Hata Yoga School, this week brought the chance to go on a two-day trip to Trichy, a town about 250 km from the Isha Yoga Center. This was an opportunity to visit a few special sites of yogic significance – a temple specially designed for the sadhaka, and places that have witnessed and been drenched in the energy of many Masters. 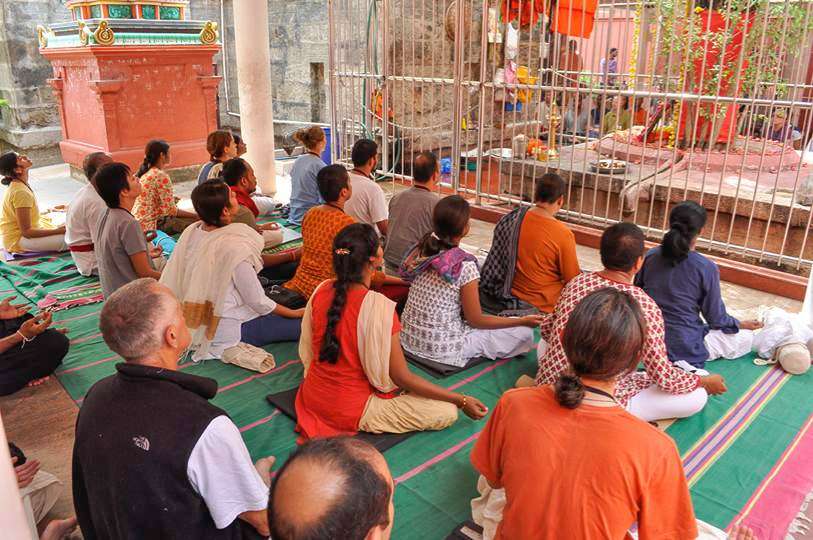 The group set out on the morning of 16th September after their practices. The first stop was at Nerur – the samadhi of Sadashiva Brahmendra. Sadhguru has often told us the story of this yogi who finds pride of place in the Dhyanalinga parikrama:

“Sadashiva Brahmendra was a nirkaya – he had no sense of body. Wearing clothes does not even occur to a person who has no sense of body, so he just walked naked; He had no sense of boundary and property either, and one day, he happened to walk into the king’s garden on the banks of the River Cauvery. The king was relaxing with his queens, when he saw Sadashiva Brahmendra walking into the garden naked in front of the women. Sadashiva Brahmendra had no sense of who is a man or a woman. The king got angry, “Who is this fool walking naked in front of my women?” He sent his soldiers and ordered them, “Find out who this fool is.” The soldiers ran behind him and called the yogi. He did not turn back and simply kept walking. The soldiers got angry, took out their sword and struck at him, severing his right arm. But he did not even break his stride. He just kept walking.

Seeing this, the soldiers were terrified. They realized this was no ordinary man. Even if his arm is chopped, he keeps walking! The king and soldiers ran behind him, fell at his feet, and brought him back to the garden. He lived in that garden for the rest of his life and left his body there.”

Engulfed by the quietude of the place, the group completed their practices here, under the shade of trees and then sat down in meditation to imbibe what this powerful space had to offer.

The climb up Rockfort temple

The group then went on to Trichy, checked into the hotel they were to stay at and then assembled in the hall for the evening session of practices – a space no way as conducive as the Adiyogi Alayam, but the participants gave themselves to their sadhana before heading to the famous Rockfort temple. This 7th century temple dedicated to Ganesha perches 83 meters up on a rocky hill, and as they were told the history and significance of the place, they marvelled at the complex architecture, the dedication required to construct this complex when no automated technology was available. After the parikrama, there was time to look out on to the wonderful view – the sun setting in the horizon, the meandering Cauvery at a distance and a top view of Tiruchirappalli town, with its many ancient temples standing tall.

The next day started with Guru Pooja and practices after which the group headed to the temple of Thiruvanaikaval. There is a very fascinating context to this shrine. Sadhguru tells us that the most fundamental sadhana in yoga is bhuta shuddhi, or cleansing of the five elements:

“The pancha bhutas are the five elements in nature. If you look at yourself, your physical body is made up of five elements. These are earth, fire, wind, water and space. They come together in a certain way to become the body. So the whole spiritual process is about going beyond the physical, beyond the five elements. These elements have a huge grip on everything that you experience. To transcend them, the fundamental practice of yoga involves what’s called bhuta shuddhi. For every element that is involved, there is a certain practice you can do to become free from it.”

Sadhguru tells us that in South India, five major temples were built for five elements. Moreover, the way they were positioned was in proper alignment, which meant that the set of temples worked as a magnificent yantra that served the entire Deccan Plateau. Sadhguru describes further:

“These are yogic temples. These temples are built in a certain way, with a certain type of energy which assists that type of sadhana. So yogis travel through these five temples doing sadhana in many cycles to become free from this. If you want to do sadhana for the element of water, you go to Thiruvanaikaval. For space, you go to Chidambaram and so on.”

The Jambukeswarar temple of Thiruvanaikaval is one of these five and is dedicated to the element of water. The group went about in great wonder and gratitude, filled with awe for the linga, which is situated below ground level and the sanctum sanctorum which resonated with such tremendous energy.

After this, the next stop was Sadhguru Sri Brahma’s ashram where he sat in meditation many decades ago in preparation for the Dhyanalinga. The space still reverberates with intensity and the visitors took turns to sit in the octagonal space covering the pit where Sadhguru Sri Brahma had sat.

As the buses headed back to the ashram, the participants, who had not eaten anything so as to maintain the empty stomach condition, were wondering how they would do their evening practices – after all, they were still in the middle of their mandala. The bus pulled up at Palladam town, where volunteers had transformed a kalyana mandapam (marriage hall) into a yoga hall! Familiar Yoga Padhi music streamed out and, gratefully, the participants began their asana practices. A wonderful dinner was served and finally, the journey ended at the ashram just before midnight. It was a truly memorable excursion.

Editor's Note: The Isha Hata Yoga Teacher Training Program is an unparalleled opportunity to acquire a profound understanding of the yogic system and the proficiency to teach Hata Yoga.  For more information, visit www.ishahatayoga.com or mail info@ishahatayoga.com.