Estimates say that a farmer commits suicide every 30 minutes in India. Isha Foundation is taking steps to change this, by supporting the formation of collectivized farming units.

According to the Government of India’s estimates, on average, since 2001, a farmer has committed suicide every 30 minutes. National Crime Records Bureau records show that at least 284,694 Indian farmers have taken their lives since 1995. Poverty and debt coupled with changing climate patterns, soil erosion, and lack of market savvy take a debilitating toll on a farmer’s lot. Buffeted on all sides by forces beyond his control, the individual farmer is often driven to the point of desperation, ending his own and his family’s life.

The government has taken note of this disturbingly unrelenting trend in suicide rates, and has introduced several schemes to change the agricultural landscape. One such scheme has been to encourage the formation of Farmer-Producer Organizations (FPO), which bring farmers together, allowing them to make a joint agricultural effort, thereby avoiding the pitfalls that lie before individual farmers and those with small holdings.

With Sadhguru’s guidance and vision, Isha has been closely involved in improving farmers’ situations and the general state of agriculture in Tamil Nadu for many years. Considering its past experience in agroforestry, creation of herbal gardens and collaboration with other agricultural NGOs, Isha was asked by the Small Farmer’s Agribusiness Consortium (SFAC), Dept. of Agriculture, Govt. of India to support and guide the farmers of Thondamuthur block, Coimbatore, in forming an FPO and carrying out collective activities. 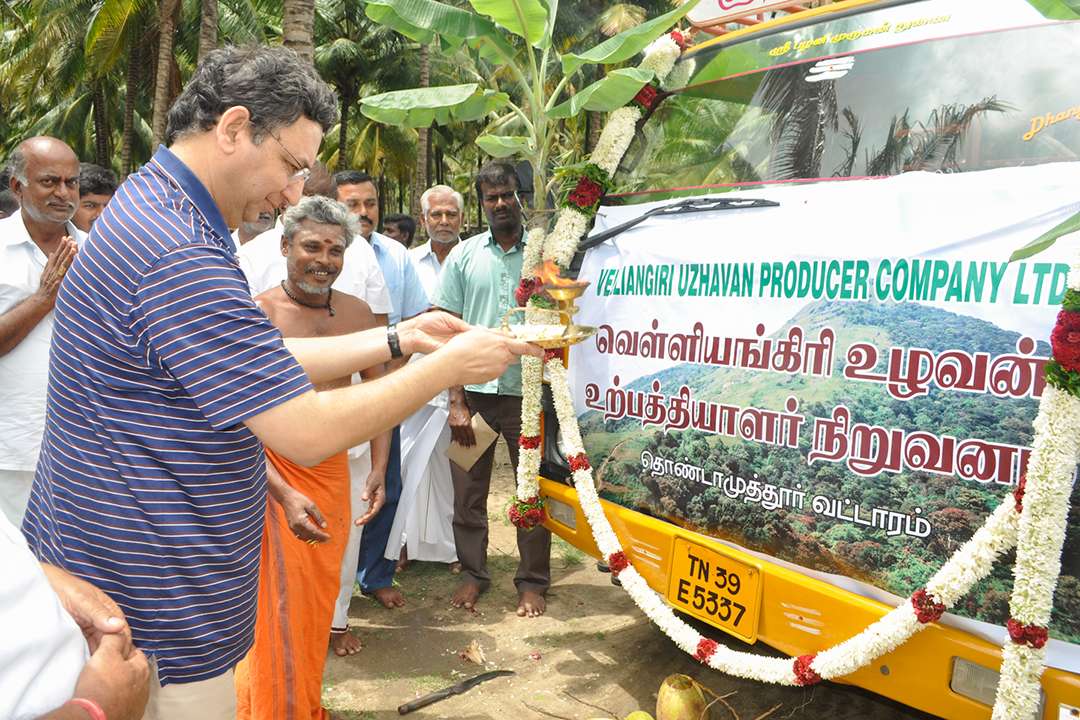 Pravesh Sharma does pooja for the van carrying the first produce.

In May 2013, 500 farmers in Thondamuthur block formed the Velliangiri Uzhavan Producer Company Ltd. with the support of Isha Foundation. The company has been working to increase agricultural productivity and through collectivized production and aggregation of produce, creating greater market gain for the member-farmers. Isha Foundation has been providing the farmers with advice and support in incorporating their company, in their agricultural activities, and in the marketing of their produce.

Pravesh Sharma flags off the van carrying the first produce.

On September 18, the company sent off its first consignment of aggregated coconut produce, in a function at farmer Kittusami’s house in Iruttu Pallam village. The van carrying the produce to the market was flagged off by IAS officer Pravesh Sharma, MD of SFAC, and IAS officer Anil Meshram, Director of Agricultural Marketing and Agribusiness Directorate, Tamil Nadu. The flagging-off function was followed by a meeting between the two IAS officers and the 15 directors of the farmers’ company. The board of directors is led by President Vishwanathan, and includes 2 women. Discussions included future strategies and support needed from the state and central governments. The officers assured continued support in the farmers’ activities, subsidized rates for cold storage facilities for the produce and also help in exporting coconuts. The company is currently producing coconuts and also plans to make value added products from coconuts. They also plan to grow banana, turmeric, vegetables and sugarcane in the future.

Building awareness on the importance of planting fruit trees.

Several other Isha activities are actively involved in improving farmers’ situations. Through the Project GreenHands environmental initiative, Isha pioneers agroforestry initiatives by supporting farmers to plant trees as poly-culture crops on lands that they can no longer even afford to farm, thereby rehabilitating once barren land, protecting the soil from flood erosion, improving the health, happiness and livelihood of farmers, increasing green cover, improving micro-climates and sequestering carbon dioxide from the atmosphere. The creation of herbal gardens has also been undertaken to ensure that people have access to indigenous medicinal herbs and various types of fruit trees, helping villagers maintain a healthy and nutritious diet.

Isha has also been working with several other NGOs such as National Agriculturist Awareness Movement (NAAM), a national organization working to revive the farming community; Low External Input and Sustainable Agriculture (LEISA), a worldwide organization working for the promotion of organic farming; and The Tamil Nadu Organic Farmers Movement founded by Dr Nammazhvar, an agricultural scientist and expert in agroforestry, to create awareness among farmers for better agriculture practices and methods.

Editor’s Note: To find out more about how you can participate in this endeavor, contact info@ishafoundation.org.