Hands of Grace is a handicrafts fair organized by Isha Foundation during the festival of Navratri. The fair will showcase several arts and handicrafts from around India, and we bring you two such crafts in today's blog post - Chanderi fabrics and Kansaware.

Hands of Grace, a handicrafts fair, is being organized by Isha Foundation during Navratri, from 9th to 13th October at the Isha Yoga Center. 50 stalls will showcase thousands of exquisite items including furniture, interior décor, garments, organic bodycare products, stone and metal crafts, accessories and gift items, offering the gamut of India’s arts and crafts tradition. Hands of Grace is an endeavor of Isha Foundation that seeks to rejuvenate India’s traditional arts and crafts industry and establish a lasting legacy for future generations. It is a part of Isha’s larger initiative to revive India’s cultural ethos.

Through this 4-week series on the Isha blog, we hope to showcase a few of the varied handicraft forms and craftspersons who will be a part of Hands of Grace. Today, we focus on the art of making Chanderi fabric and Kansaware.

Chanderi saris display remarkable subtlety...The fabric has been around for about 600 years now since the Mughal period.

Named after the historically strategic town of Madhya Pradesh to which it belongs, Chanderi is a hand-woven fabric, unique in its translucent and sheer texture. What lends the fabric this quality is not the fine thread used for weaving, but the use of single flature yarn. In this type of yarn, the “glue” of the raw yarn is not removed, and this non-degumming causes the finished fabric to shine in its transparency. While the transparent yarn might be of cotton or silk, about 90% of Chanderi saris are made from a cotton-silk blend. The fabric has been around for about 600 years now since the Mughal period.

The town of Chanderi is home to about 3500 families of various communities who base their livelihood on the weaving of Chanderi fabrics. In the last four years, there has been an unprecedented boom in the demand for Chanderi saris and fabrics. This has led to an improvement in the wages and working conditions of the weavers. 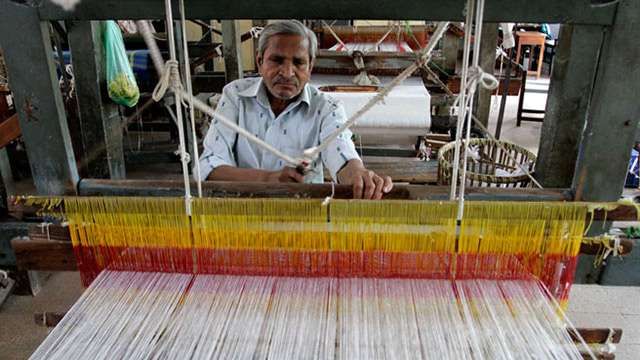 Chanderi saris display remarkable subtlety. This is especially true of the balance of colors used on the body of the sari along with those used on the pallu or border. In fact, it was only 50 years ago that color was introduced to Chanderi saris. Until then, all fabrics were woven in the natural white of cotton and were washed in saffron to give them their characteristic golden hue and fragrance. Some weavers were known to use natural dyes made from flowers on the finished woven product. Today, Chanderi weavers prefer fast-acting chemical dyes instead.

The buttis or motifs that adorn and complete a Chanderi sari are also hand-woven, but only after the design is prepared by the master weaver on graph paper. The master weavers draw inspiration from the earth and the sky during the designing process. Swans, trees, fruits, flowers and heavenly bodies find expression on the tiny motifs, as do Asharfis, the popular Chanderi design in the shape of a gold coin. The more elaborate the motif, the more expensive the sari. Expert weavers use specialized needles and gold thread to prepare these motifs, and also the rich golden sari borders. The quality of this gold thread also sets Chanderi saris apart from other cheaper imitations. In older times, the borders and motifs were woven from pure gold or silver yarn. These were made to order and very expensive. But those were the days when Chanderi fabrics found patronage only among royal families. Now, Chanderi has found its way into the home of the common man.

For the past 300 to 400 years, Prakash Chandra’s family has been crafting vessels and other items from kansa (bell metal). It is their occupation that has made them a part of the Kansa community, and people like Prakash are referred to as Kansaris.

Traditionally, the people of Orissa have always used kansaware to cook and serve food, as they believe in the medicinal properties of the metal.

While all members of Prakash’s family are involved in the process of crafting, it is the men (his father, brother and himself) who play a major role. They are in charge of firing the metal, melting it, digging small pits into the earth and pouring the molten metal into these pits for shaping. Once cooled for 3-4 hours, wood charcoal is used for re-heating, and the red-hot metal is beaten with an iron-hammer to set it into the desired shape. At this stage the vessel is a sooty black color, and so it is scrubbed with a leaf called Amadhi to remove the black coating. This, in fact, is the only step in which the women of the family are involved. The cleaned utensil is then polished on a stone polishing wheel. Prakash and his family begin their day at 4 am, and are able to produce only up to four thaalis (platters) a day due to the labor-intensive process involved.

Traditionally, the people of Orissa have always used kansaware to cook and serve food, as they believe in the medicinal properties of the metal. Kansa utensils have always been an essential part of the bridal trousseau in Orissa. But kansaware is considered expensive now. The cost of bell metal is presently about 250 rupees per kilogram. Hence, the utensils aren’t made as heavy or as large as they used to be. Prakash says that most of his clientele are doctors who are conscious of the health benefits of using kansaware.

Editor’s Note: The nine-day Navratri festival from 5th to 14th October at Linga Bhairavi will also be a part of the celebrations. Each night includes a concert by noted classical musicians. A puppet show and parrot astrology are also part of the fun and festivities.

For more info about Hands of Grace, check out the e-flyer. Travel info to the Isha Yoga Center is available here.