Incessant rains in Chennai before the mega program last week left the program venue waterlogged. Two volunteers share about the program and about the efforts to rectify the “watery” situation.

The Chennai mega program from 13-15 September 2013 was the largest initiation into Shambhavi to date with 15,265 people. Incessant rains in Chennai, right upto the night before the program left the city in general and the program venue in particular, waterlogged. A volunteer at the program venue and another volunteer of Sounds of Isha, share their perspectives of the program, and of the efforts on the days leading up to the program to rectify the “watery” situation.

One day before the program

The venue was in such a condition that even hardcore enthusiasts would shudder at the thought of entering the place.

The venue was in such a condition that even hardcore enthusiasts would shudder at the thought of entering the place. People were moving around with their pants folded half-length, trying to find every little stone or rock which could save them from stepping in the slush. If you dared to place your feet on the ground, it would have gone in at least 3 or 4 inches deep in some places.

At a volunteers’ meet in the evening, a few hundred volunteers turned up and took up the challenge of restoring some normalcy – but it rained again! After the meeting many of the volunteers helped the sevadhars by forming a chain to spread gravel all over the hall and bring the venue to some semblance of sanity – not an easy task given the size of the hall and the fact that the rain gods didn't spare any corner. 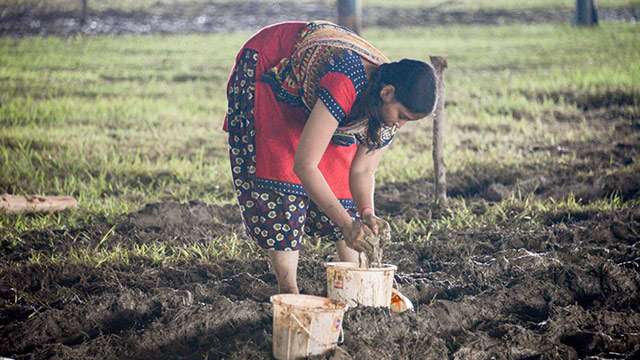 Everything was going into a crisis mode. The truck carrying the audio equipment got lost on the way and the driver was unreachable! The organizers had to use GPS techniques to track the vehicle and finally the vehicle arrived the evening before the program began. We found out later that the truck tyres had burst due to overloading and it was a challenge to fix it.

Everyone had their fingers crossed about the rains, praying that it wouldn’t rain during the program! Would all the 15000 people turn up?

The program made me realize that people can come up with solutions to the most difficult challenges if only they stay balanced and just do what is needed.

It rained again the evening the program was to begin, though it was for a short time! The audio setup, which had been underway as late as 2 AM in the morning, was completed just in time before the program started. The hall was restored to some normalcy after tarpaulins were spread out. Now it looked like a hall. Earlier it was a cricket play ground with play called off.

The area outside the venue was still a challenge. Finally, someone came up with the bright idea of small tables (around 3 inches in height) all around the periphery and leading to the toilets so that people could somehow make it in spite of the slush!

It did not rain over the next 2 days of the program and everything happened.­ Over 15,000 people attended, the hall was full, people danced, laughed, cried and went back touched. The program made me realize that people can come up with solutions to the most difficult challenges if only they stay balanced and just do what is needed.

A Sounds of Isha Volunteer Shares

During program breaks, Sadhguru would ask us to play the drums or some lively music...It is always a totally different kind of rhythm that we would have never thought of on our own.

We had sent most of our drums and instruments on a lorry two days prior to leaving the ashram. We are always little hesitant sending our instruments out alone, but this time we were psychologically solaced by the fact that the truck was 90% full of pillows. When we reached the hall on the afternoon of the program, we wanted to unload everything to the dais as soon as possible, an oasis in this ocean of mud.

We had a guest-meditator join us on violin for the welcoming music as participants were welcomed into the hall on the first day. Trained in purely Carnatic form, it was enjoyable to hear how he improvised with our eclectic variety of instruments, at times breaking away from the conventional classical style and exploring creative avenues of melody.

During several of the program breaks, Sadhguru would ask us to play the drums or some lively music to usher everyone back, while keeping the situation vibrant for those who had already returned to their seats. Usually he will be walking the length of his dais, and would stop to show us a beat on his hand (or this time on the A/C unit) that He wanted us to play. It is always a totally different kind of rhythm that we would have never thought of on our own.

Being on the music dais, or just off to the side, we really get to see the transformation that takes place in the participants throughout the three days. Some come with inhibitions, leaving their smiles at home, and in a constant state of vidamaten mudra (Sadhguru’s humorous term for keeping the arms folded before the chest) By the second day their hands are open, faces bubbling and body language responding to the powerful process that is taking place in the hall. By the third day morning they are out of their seats and dancing to the upbeat music we play.

Volunteer
Related Content
article
The Bicycle Yogis: Through the Rear-view Mirror
After 4 months on the road, peddling the states of Tamil Nadu and Karnataka, the Bicycle Yogis have now touched over 32,000 people, sharing the gift of Yoga with rural India. Over the New Year the team took a short break to relax, to look back and to look forward at the road that lies ahead. Let’s hear their story in their own words.
Mar 18, 2020
Loading...
Loading...
article
The First Inner Engineering Class in Ghatanji, Maharashtra
An Inner Engineering teacher, Tejas, shares his unique experience of teaching the class in Marathi language to the villagers in Ghatanji in Maharashtra where the Rally for Rivers team is working to revive the Waghadi river.
Mar 12, 2020
Loading...
Loading...
article
The Bicycle Yogis: Offering Free Yoga To 18,000 Rural School Children
Let’s take a ride down memory lane as the Bicycle Yogis take us through some of their favorite memories from their busiest month yet - meeting a blissed out watchman, teaching deaf children, riding along Cauvery – and much more!
Jan 8, 2020
Loading...
Loading...
Close