Excitement builds in Berlin as Sadhguru’s first public talk in the city approaches! Read more on how volunteers have been paving the way for this momentous occasion.

Sadhguru’s first-ever public talk in Berlin is approaching in less than a week's time!

The event, entitled “Inner Engineering, Technologies for Wellbeing,” is expected to draw over 2000 guests on July 3rd at the Tempodrom Theatre, located at the heart of the German capital.

Volunteers, employing the same enthusiasm with which they exalt and cheer their national teams, have been cheerfully joining hands to prepare the ground for Sadhguru's visit to Berlin. Here is an account of their joyful endeavours!

Sadhguru in the German Media Spotlight

In the midst of these numerous activities, the German Isha volunteers are already eagerly preparing for Sadhguru's visit to Berlin on July 3rd.

Erik, a volunteer supporting the event, expresses how his dream is becoming reality: "I remember how on June 25th, 2011, my blind eyes opened up a bit and got a glimpse into an ocean of ecstasy as they connected with Sadhguru's eyes in Berlin for the first time! I have been on fire since then, eager to make the vision for his visit to Berlin a reality. Some might call it craziness, but what Sadhguru has offered me had a visible impact on my life, my health, my joy, my wealth, my growth, my relationships, and so much more. It has been a phenomenal ride filled with high intensity and a growing desire to see many more beautiful souls join the ride here in Germany!"

Very well-known magazines and blogs are beginning to publish these articles and, by doing so, are introducing Isha and Sadhguru to a very large, new and growing audience here in Germany.

The preparations for this premiere began months ago, and volunteers have been exploring all possible avenues to spread the news.

The Huffington Post in Germany has already published articles from Sadhguru translated into German. Sein, the leading magazine on yoga and spirituality in Germany, and Yoga Aktuell, another prominent yoga magazine, have also done so. Der Tagesspiegel, Berlin's major daily newspaper, is organising for an interview with Sadhguru upon his arrival.

Fabian, a Hatha Yoga teacher from Konstanz (Bodensee) shares: "Over the last few weeks, we have built many volunteer teams for various activities. We now also have a translation team in place consisting of very committed volunteers who help to make Sadhguru's words available to the German media. More and more very well-known magazines and blogs are beginning to publish these articles and, by doing so, are introducing Isha and Sadhguru to a very large, new and growing audience here in Germany." 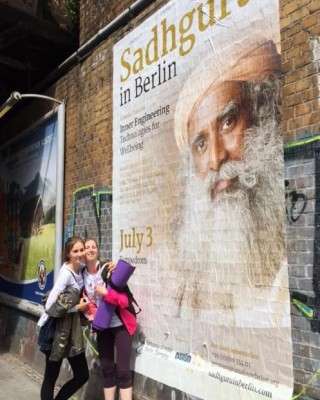 Even though Sadhguru is coming on the 3rd of July, his face can already be seen all across Berlin. Fliers line the city’s most traffic-heavy streets, and mega posters adorn many walls within Berlin, making the information unmissable!

A volunteer expresses his enthusiasm, saying: "We are now eager to see all these posters come alive when Sadhguru enters the stage on the 3rd of July at the Tempodrom in Berlin!"

The Inner Engineering Online program has gathered thousands of participants within the UK and Europe alone since its launch. After completing the online course, individuals are invited to deepen their experience by attending a 2-day live program where they have the opportunity to learn the Shambhavi Mahamudra Kriya. Until last year, this live experience was available only in the US and UK. Now, however, a new hub is gradually growing in Germany.

A 4-day live Inner Engineering program, without an online prerequisite, has also been launched for the first time in Berlin, UK, The Netherlands, France and Switzerland.

Thomas Kinder, an Isha volunteer from Berlin shares: "Since the first program in Berlin, which happened on the 3rd of May, 2015, the number of participants has been increasing with each successive program. Now, we have reached over one hundred participants and are still growing. It is great to see that so many people in Germany make the decision to be initiated into the Inner Engineering practices and to take a bigger part of their lives into their own hands."

A 4-day live Inner Engineering program, without an online prerequisite, has also been launched for the first time in Berlin, UK, The Netherlands, France and Switzerland. These programs will be offered following Sadhguru's public talk, from the 28th to the 31st of July, 2016.

In addition to the rapid rise in number of program participants, Germany is witnessing an increasing number of young individuals who are willing to pro-actively share these simple tools for wellbeing and inner transformation with others.

After the United Nations declared June 21st as the International Day of Yoga in 2015, Sadhguru has inspired thousands of people worldwide to bring a drop of spirituality into everyone's life by offering a training which enables them to offer live sessions in their hometowns. This year, keeping up with the momentum of this occasion, a motivated group of volunteers from all corners of Germany have organized a series of events in collaboration with the Embassy of India. With passion in their hearts, they made it possible to offer Isha Upa-Yoga practices to new audiences in Berlin, Hamburg, Cologne, Frankfurt, Munich and Stuttgart within the span of just a few days’ time!

You can also read the articles published in the German media at the following links: