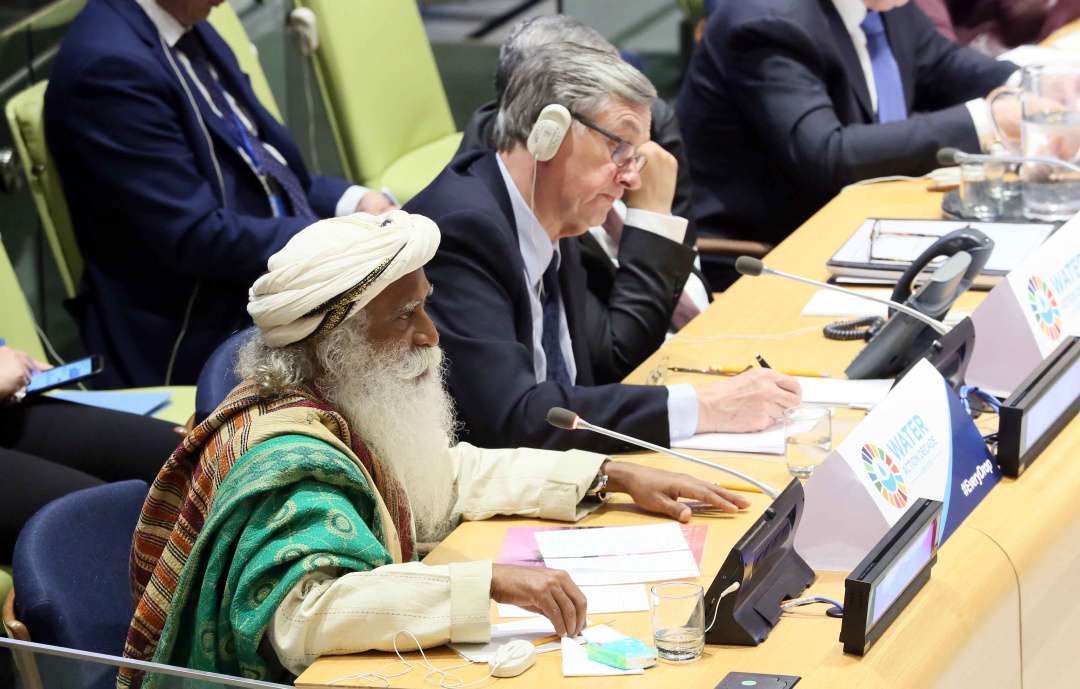 Rally for Rivers catches the attention of the United Nations

After spearheading the Rally for Rivers movement, now seen as the largest citizen-backed ecological movement in the history of the planet, Sadhguru was invited to the United Nations launch of International Decade for Action: Water for Sustainable Development 2018-2028in March 2018. Sadhguru was invited to participate as a panellist on the topic “Contribution of the Water Decade to the implementation of water related SDGs: addressing challenges and seizing opportunities through strengthening cooperation and partnerships.”

Rally for Rivers garnered international attention not only because of the unprecedented public backing the movement received in India, but also because dying rivers and shrinking arable land are challenges that find global resonance. The campaign produced an actionable policy that offers a comprehensive solution to these challenges without pitting economics against ecology.

Participating in the panel discussion, Sadhguru said, “The reason why India responded the way it responded to Rally for Rivers is because it was an economic plan. Unless we make ecology into a lucrative process for the large number of people involved in it, large masses of people will never involve themselves in making this happen.”

A video released by UN’s High Level Panel on Water during the launch of theInternational Decade for Action says 40% of the world’s population are affected by water shortage and only 0.5% of the world’s water is easily accessible to people. River rejuvenation will play a pivotal role in recharging ground water, revitalizing soil, and holding rainwater in the ground, especially in tropical and sub-tropical regions. “You can hold the water in the land only if the soil has the necessary organic content and there is vegetation,” said Sadhguru. Rainwater runoffis a major cause of water wastage in India.

The Rally for Rivers Draft Policy Recommendation has been drawn up in consultation with over 25 scientists and lawmakers including experts from hydrology, hydrogeology, forestry, agro-forestry, horticulture, Farmer Producer Organisations (FPOs), irrigation, agribusiness, agri-marketing, natural resource management and also experts from project financing, the Food Safety and Standards Authority, farmers’ unions and health and nutrition.