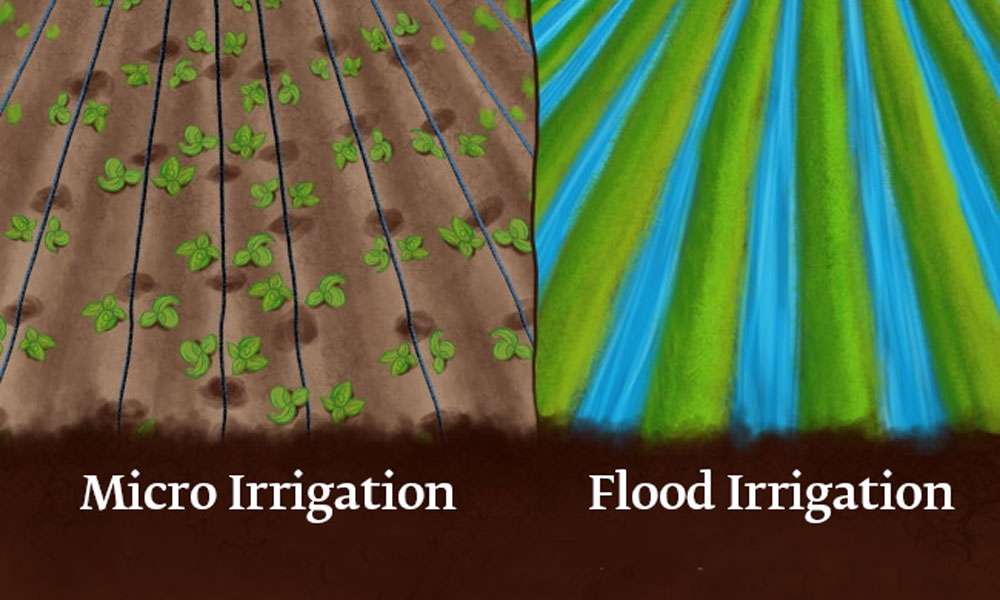 It is no secret that India is facing a severe water shortage crisis. Our rivers are drying up and our groundwater is depleting at an alarming pace, even as the population continues to boom. India supports about 1/6th of the world population, though it comprises of only 1/50th of the world’s land and 1/25th of the world’s water resources.

Saving water by turning off taps and fixing leaks is an appreciated gesture, but if we really want to tackle our water shortage, we need to address agriculture. Agricultural water demand (irrigation) amounts to almost 80% of the total fresh water demand in the country. Till now, India has been mostly following the conventional flood irrigation method. But it is time to transform our agriculture by adopting micro-irrigation practices which are far more efficient in saving water at the same time delivering better crop yields.

How Are Flood Irrigation and Micro-Irrigation Different?

Flood irrigation is the traditional form of irrigation. This generally involves extracting groundwater through bore wells, or directing water from a nearby river source, to “flood” the entire farmland through open canals. Micro-irrigation, on the other hand, is an advanced method of irrigation where the water is delivered directly at the root zone of crops in a controlled manner through a closed conduit pipe network.

Flood irrigation is quite inefficient as only 40-60% of the water is actually utilized by the crops. The remaining water is lost through evaporation in the open canals, percolation into deeper layers of the soil, and runoff. Micro-irrigation has an application efficiency of as high as 90-95%, as the water is directly applied to the root zone of the crop and is maximally absorbed. This means you would need only half as much water supply to irrigate the same area. And it will result in better plant growth as well as quantity and quality of yield.

Crops need a specified amount of soil moisture for optimal growth. In conventional flood irrigation, water is applied to the soil about once in a week. Here, the soil moisture content reaches saturation just after irrigation and then gradually dries up till wilting point before the next irrigation. So most of the time, there is either too much or too little moisture in the soil, which in turn hurts plant growth and yield. In micro-irrigation, daily water application at the root zone ensures a favorable soil moisture at all times. The less humid environment also helps in pest control and prevents disease.

Flood irrigation is a labor-intensive process that demands that the land be leveled and then shaped to create furrows or canals through which water can flow. The subsequent water runoff causes erosion of rich soil. Micro-irrigation, by virtue of localized water application, avoids soil erosion. It does not require land leveling and can irrigate fields that are irregularly shaped, making it much less labor-intensive and less costly.

The localized water application in micro-irrigation prevents fertilizers from washing away, and so reduces nutrient loss or leaching. In fact, the micro-irrigation system can also be effectively used to apply fertilizers (fertigation) in a targeted way so as to prevent weed growth.

Hear It From The Farmer’s Mouth

Valluvan is a farmer from Pollachi, Tamil Nadu who has been associated with Project GreenHands and the Isha Agro Movement for nearly a decade. He shares:

“I have been practicing micro-irrigation on my farm for many years now. One thing that I see is that there is constantly moisture in the soil – even now, in the summer season. To grow a crop, you need sun and water. I don’t ever have to worry about having enough water. I can grow any crop, any time. All I need is a patch of sunlight, and I can introduce new crops. My neighboring farmer could never imagine doing something like this in the peak of summer!

“I’m growing multiple crops so my income has increased. Introduction of new crops means more weed control. Another thing is, it is hard to enforce a continuous paid workforce to water plants on the farm. But with micro-irrigation, my dependence on labor has gone down to a great extent and my savings have gone up.”

Micro-Irrigation – the Future of Agriculture

There are many stellar examples of micro-irrigation in countries around the world. For example, Israel, one of the most naturally water-scarce nations in the world and the inventor of drip-irrigation, has become a leading water manager. It is time for India to emulate.

On average, Indian farmers use three to five times more water for producing the same quantity of crops relative to their Chinese, American and Israeli counterparts. Furthermore, 52% of India’s agricultural area has no irrigation and remains solely dependent on rainfall. But with rain patterns becoming unpredictable due to climate change, it is imperative that we have a dependable and far-reaching system of irrigation in place.

Being an agricultural country, India must implement micro-irrigation large-scale. The future of the nation depends on it.