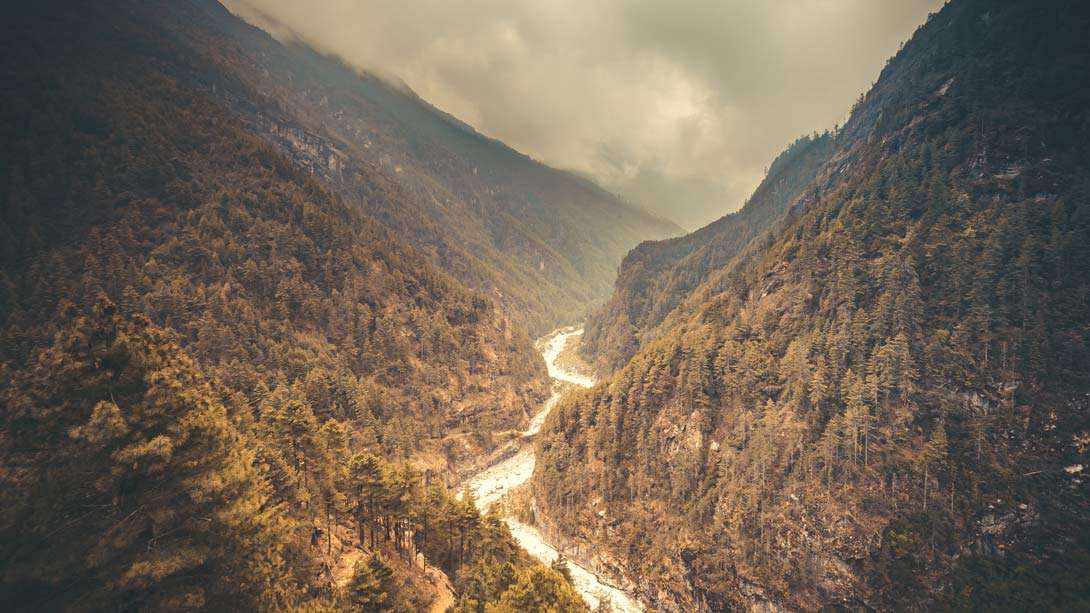 It will be useful and important to understand technically why rivers and their ecosystems are essential to human societies. A river that we see as a huge gurgling stream or as a placid, wide and long flowing water body is a dynamic phenomenon. Rivers are not only water bodies that meet human water needs – they are essential elements for vast ecosystems and for the health and survival of billions of people.[1]

Throughout its entire course, the river not only transports water, but also sediments and other micronutrients from the upper reaches of the river to the plains. The plains are usually the food basket of any river basin. The sediments and micronutrients have a very important role to play in keeping these plains fertile.

The entire area from which water is drained into a river is called its catchment, drainage basin or watershed. The channel through which a river usually traverses is called the river channel. The water that flows in the river is usually confined to that river channel. In larger rivers, and rivers where the seasonal flow changes, flood waters overflowing from the regular river channels create wider floodplains. Floodplains may be wider than the river channels when the river hydrographs are not straight lines, i.e. when there is marked variation in the quantity of flow over time. Neither the floodplains nor the river channels are clearly demarcated by nature. The `100-year floodplain’ is the riverside land that has a 1% probability of flooding in any year, and is one of the accepted measures of demarcating a floodplain.

In May 2017 the government of Madhya Pradesh moved to accord the Narmada river the legal status of a “living entity”.[3] And earlier in April 2017, the Uttarakhand High Court declared Ganga and Yamuna and their tributaries as “living entities having the status of a legal person”.[4]

A renowned scientist and aquatic ecologist, Professor Brij Gopal of JNU, in an essay about river Yamuna entitled Living Rivers and Dying Rivers, compares the river Yamuna and all rivers to living entities. He starts the essay with this clear statement – “Living beings are characterized by their function and homeostasis.”

“…the tendency towards a relatively stable equilibrium between interdependent elements, especially as maintained by physiological processes.”

“…a large natural stream of water flowing in a channel to the sea, a lake, or
another river”[5]

“The quality and health of a river as an ecosystem is related to the uninterrupted flow from its origin until it meets the ocean. This is its longitudinal connectivity.”

People, to a great extent, are concerned with that particular stretch of the river that they interact with. This applies to those who are dependent on the river or live on its banks. But for city dwellers, a river is just the source of water that comes from the taps. Others see rivers as waterways to transport goods, and still others view them as resources to be stored in some structure or whose flow will generate energy.[6]

Yet, it is crucial to have a look at the larger picture to understand the importance of rivers. One of the most critical roles of a river is that it carries water from precipitation to the ocean, thus closing the hydrological cycle.

Along its journey, a river changes its course, its temper, and its attitude from its inception, like a new-born baby, in the snow-melts or in the forest – until it meets the ocean as a mature elderly person.

“Rivers are three-dimensional, dynamic ecological systems which depend upon longitudinal, lateral, and vertical transfers of material, energy, and biota that are determined by their specific flow regimes. The rivers change, over time, in response to hydrological and biological processes and human interventions. Each river has a characteristic identity based on the totality of its physical, chemical, biological, and functional attributes.”[7]

The area on either side of a river that becomes part of the extended river bed when the river floods is called the floodplain. The extent of the floodplain is defined by the area a river would occupy in the event of a 100-year return flood.[8] This area should belong to the river in order for the river to survive and also for the larger human civilization to not perish. The diversity of the ecosystem housed in a floodplain is sometimes 100 or even 1000 times that of the river water ecosystem.

Manoj Misra, known for his work on the revitalization of Yamuna, in an essay on the importance of floodplains, lists the following[9]: