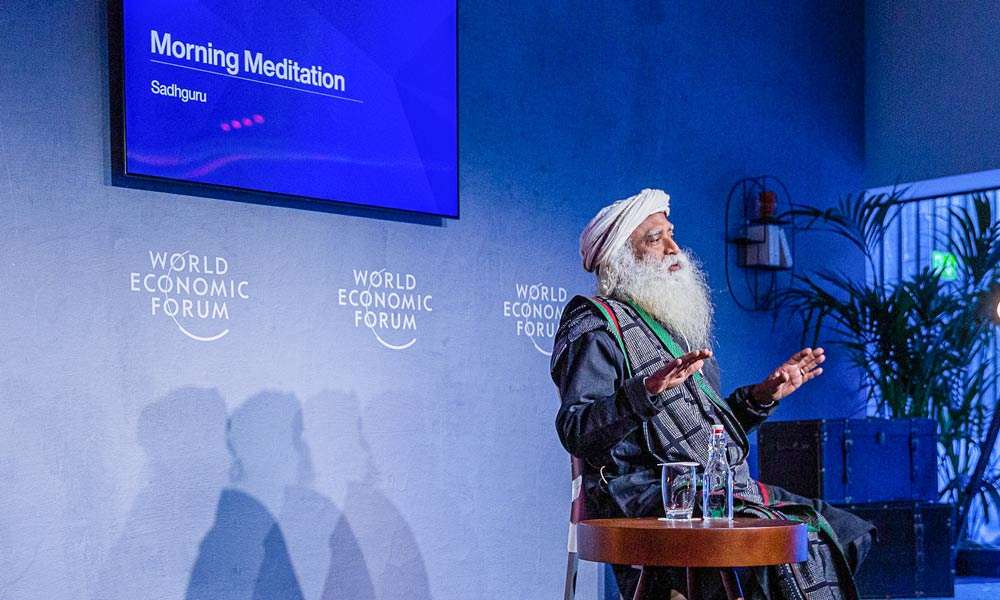 The event was the official briefing of “The Champions for 1 Trillion Trees Platform,” a major new initiative led by the United Nations Environment Program (UNEP) and the UN Food and Agriculture Organization (FAO) at the World Economic Forum Summit in Davos, on Feb 22. The goal of the initiative is to plant 1 trillion trees by 2030, adding to the already existing 3 trillion trees on the planet. The illustrious group on the stage also included Hindou Oumarou Ibrahim, President, Association for Indigenous Women and Peoples of Chad (AFPAT).

Sadhguru explained that unless 50-60% of the soil on the planet is put under shade, there is no way to maintain fertile soil, rich in organic content. The alarming decline in soil quality has led to severe depletion in the nutritional value of food grown on land. “Nutritional value of food we eat has come down by 40%; trees have to come back if this has to change,” said Sadhguru.

Problems may be complex, solutions can be simple. The Champions for #1TrillionTrees Platform will change the ecological trajectory of our planet, combat #ClimateChange – a crucial step in the right direction. Let’s make it happen. -Sg #WEF20 @1t_org https://t.co/gNyMtRVhwv pic.twitter.com/G11a56tT0q

Sadhguru also spoke about the illegal timber trade in the world. “Timber sold around the planet is largely illegal, because timber is still treated as forest produce. Timber is a lucrative item – it has to become an economic process,” said Sadhguru, adding that the only way to stop the illegal trade is to make timber an agricultural produce and allow farmers to grow, fell and sell it for economic gain.

Touching briefly upon the rural to urban migration in India and the world, he explained how planting high-value, high-yield crop on the farmland is one way to ensure the farmer stays on his land. According to statistics, hundreds of millions of people are expected to migrate to Indian cities in a decade and about 1.6 billion people will migrate worldwide. “Developing rural communities by giving them an incentive to stay on the land is one of the ways to check uncontrolled migration for which no city is prepared,” said Sadhguru.

President Duque said, “Colombia considers this a very important milestone,” and committed to his country’s contribution of 180 million trees by 2022. Mr. Benioff spoke about the phenomenal carbon sequestering potential of 1 trillion trees. “More than 200 gigatons of carbon will be sequestered,” he said. Jane Goodall presented a radical idea that if we name trees after people, we would want that tree to live.

What a fortune for the chimpanzees that this wonderful woman fell in love with them. I tried but she said my beard is too luxuriant to pass as a chimp. A great privilege to be with you Ma’am. -Sg @JaneGoodallInst #WEF20#1TrillionTrees #CauveryCalling pic.twitter.com/UgmTCf8Fjh

On Jan 22 at 3:15 PM (9:45 AM GMT), Sadhguru will participate in the launch event of Champions for 1 Trillion Trees Platform, a new and important initiative of the World Economic Forum (WEF), led by the United Nations Environment Program (UNEP) and the Food and Agriculture Organization (FAO) of the UN.

Other speakers who will participate in the event are:

More info about the One Trillion Trees initiative

Restoring, conserving and planting 1 Trillion Trees by 2030 can deliver massive and urgently needed progress to counter climate change, increase biodiversity and help meet the UN Sustainable Development Goals. Science confirms the carbon capture potential of trees and that there is enough land available for planting the required 1 Trillion Trees to meet the 1.5°C Climate Change Target on a least-cost pathway. This initiative requires unprecedented levels of mobilization, collaboration and empowerment at the grassroots level.

Creating a #ConsciousPlanet is possible only by raising human consciousness. Important for all and leaders in particular, whose decisions affect millions of lives, to embrace Conscious & #Inclusive leadership. -Sg #ConsciousnessRetreat @wef #WEF2020 pic.twitter.com/qKuRitvOHC

Glad to be part of the historic 50th #WEF20; economy and ecology at par. Thank you #KlausSchwab for your warm personal invite and welcome. May we all unite to shape a more conscious destiny for the planet. Let’s make it happen.- Sg @wef @Davos

This world has witnessed many epidemics. Let’s create a new one – an Epidemic of #Meditation. Cultivating the quality of meditativeness will bring clarity of vision & unleash the limitless human potential. -Sg #WEF2020 @wef @Davos pic.twitter.com/N814xDi8ls

Mr. Ayman M Tamer, Chairman and Managing Partner at Tamer Group, Saudi Arabia, met @SadhguruJV at #WEF20 and recorded this video for his daughters back home; the whole family follows #Sadhguru and he was very excited to meet him personally. @wef @davos pic.twitter.com/3bTyPqEE01

.@AnandMahindra and @SadhguruJV met at #WEF20 and the former fondly recalled his first meeting with #Sadhguru many years ago @Davos and remarked how he hasn’t changed at all in all these years. @wef pic.twitter.com/bha7Ermv3y

I asked Sadhguru @SadhguruJV @ishafoundation what he hoped the #WEF20 summit at Davos would achieve. This is what he told me #ClimateChange pic.twitter.com/SOZXI9Iv7Q

Spoke to Indian yogi Sadhguru founder of the Isha Foundation @ishafoundation at #WEF20 who welcomed the focus at Davos on the environment and ecological restoration pic.twitter.com/nM5INZsMuu

Had an opportunity to interact with @SadhguruJV at @WEF in Davos.

His ideals of spirituality and his work in the field of education & environmental conservation is a source of inspiration for millions of people around the globe. #wef20 pic.twitter.com/RgdiJprz1R

Thank you @Sadhguru for your leadership. 🙏 https://t.co/40XoGm1KPd

So incredibly blessed to have been able to meet the great and wonderful Sadghuru 🙏🏼 in Davos, Switzerland 🇨🇭 #WEF20 #Sadhguru #1TrillionTrees pic.twitter.com/LpKTCYc3c6

What a fortune for the chimpanzees that this wonderful woman fell in love with them. I tried but she said my beard is too luxuriant to pass as a chimp. A great privilege to be with you Ma’am. -Sg @JaneGoodallInst #WEF20#1TrillionTrees #CauveryCalling pic.twitter.com/UgmTCf8Fjh

21 January 2020, Davos: A decade after he last attended the World Economic Forum (WEF) annual summit at Davos, Sadhguru will return as one of the key speakers at the upcoming Summit this year which marks the 50th anniversary of the Summit. The WEF Summit will be held between 21 and 24 January 2020 at Davos in Switzerland where Sadhguru will conduct three morning meditation sessions and a half-day Consciousness Retreat for participants. The world’s most influential leaders in politics, business, academia and global organizations will be in attendance.

The theme for this year’s WEF Summit is “Stakeholders for a Cohesive and Sustainable World”. At least 600 speakers are scheduled to speak at the four-day event in which 3000 people from around the world will participate. The “Davos Manifesto 2020” will be launched on the occasion of its 50th anniversary.

Sadhguru will participate in Champions for 1 Trillion Trees Platform, a new and important initiative of the World Economic Forum, led by the United Nations Environment Program (UNEP) and the Food and Agriculture Organization (FAO) of the UN.

The event is slated for 23 January and the initiative is committed to enable planting 1 trillion trees globally by 2030. The platform will strive to establish actionable points and explore public-private sector partnerships to reverse global ecological trends such as desertification and climate change. The initiative is designed to support the 2021-2030 UN Decade on Ecosystem Restoration.

Sadhguru often speaks about the role of human consciousness in addressing global sustainable development challenges. “Today, we have the necessary technology, resource and capability to address every fundamental issue on the planet. Never before in the history of humanity have human beings been as capable as we are today. The only thing missing is an inclusive consciousness,” he says.

Sadhguru has launched ecological initiatives that aim to re-establish our interconnectedness with Nature so that caring for the environment becomes a natural consequence.

Project GreenHands (PGH), one of the largest grassroots ecological movements to increase green cover, has enabled over 3 million citizens to plant 38 million trees over 15 years.

Rally for Rivers (RfR), a movement to revive India’s dying rivers, became the largest ecological movement in the world after it received support from 162 million people in 30 days. The RfR policy recommendations to revitalize India’s rivers have been accepted by the Government of India as the national river revitalization policy.

Cauvery Calling, an RfR project, will enable 5.2 million farmers in the Cauvery river basin in Southern India to plant 2.42 billion trees over a 12-year period. It is designed as an economic model with a significant positive ecological impact.

Both PGH and RfR are aligned in their vision with Champions for 1 Trillion Trees Platform.