In a span of five days, from 19 August till 23 August 2009, three successive events consolidated an Isha initiative to transform the city of Tirupur in Coimbatore District to a leafier place. The Green Tirupur Movement began with an exhibition at the Town Hall leading to the inauguration of the planting celebration on 23 August and the subsequent planting of over 28,000 saplings across the city. In the run-up, awareness was generated at many levels through the media, be it radio, print or television, hoardings and various other avenues. Several organizations and NGOs along with many prominent figures from Tirupur joint hands with over 2000 Isha volunteers to make the Green Tirupur initiative a real people's Movement.

The Exhibition
Made possible with the active participation of school and college students and, of course, with the tireless efforts of Isha volunteers, the Green Exhibition was held at the Town Hall from 19 to 22 August. Invitations to the event had reached 8,000 households in the city. A total of eight schools and colleges along with five NGOs participated. A cultural program on 22 August vividly presented the environmental scenario. Alongside, a rally was held on the same evening to intensify the message. Vehicles plied across Tirupur in what was termed as a mobile awareness drive.

The Inauguration
The inaugural ceremony to the tree planting drive began on 23 August in the presence of Sadhguru at the Town Hall where distinguished guests gave voice and lent support to the greening of Tirupur.

Dr. M. K. Stalin, Deputy Chief Minister of Tamil Nadu, officially opened the ceremony and planted the first sapling. He stated that the Government welcomes and supports the tree planting initiated by Isha.

They all unanimously expressed their appreciation for both Isha's tree planting effort in the city and Sadhguru's inspiring work for human wellbeing in all its aspects.

Eshwaran stated that he would like to present a petition to the Deputy Chief Minister to encourage the planting of saplings on every Independence Day by the Panchayat units. Govindasamy assured he would present this point in the Legislative Assembly. Sakthivel, on his part, mentioned that tree planting was a much-needed venture as Tirupur is an industrial town and added that he has adopted a thousand trees as his contribution towards the project. Film star Shreya made an endearing statement when she said that one needs to care for a tree as for one's own child, since a tree embodies selfless love. Prakashraj expressed that often, for insurmountable problems, there are simple solutions and that among the possible solutions, planting trees is one of the simplest and most effective ones. 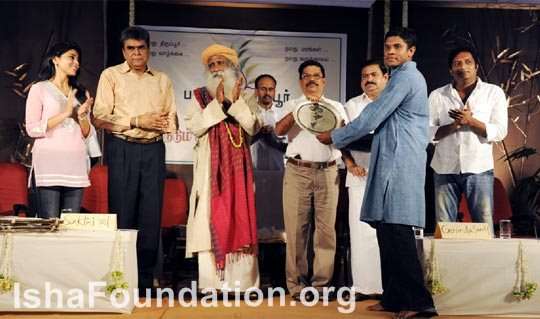 Alongside the planting drive, a Green Marathon was flagged off by Shreya in which over 2000 volunteers participated. The Marathon started from the Town Hall and ended near the Old Bus Stand. The winners were Sasikumar, Kosavampalayam, Palladam and Srinithi of Coimbatore.

A week before the mass planting, volunteers dug out pits of the size of 1.5 ft across and above and of the same depth and layered them with compost, sand and red earth. The core PGH team also trained volunteers for planting. A total of 42 types of flowering, ornamental and shade-giving trees were chosen based upon the topography of the planting locations. A number of 32,000 saplings of the height of 6-7 ft were gathered for the ceremony in which 28, 425 were planted with the participation of over 15,000 people. The saplings were planted along main roads, in residential areas, along streets, by the banks of lakes, on drainage sides and by the banks of the river Noyyal. The saplings were also planted on the premises of Panchayat offices, cinemas, theatres, schools and colleges, and in industrial areals. A total of 2,000 saplings have been stocked for replanting.

Upon completion of the planting event, in a tree valedictory function, All Indian Overseas Bank Employees' Union Bank representatives were honored for their collaboration with Isha in planting one lakh saplings.

Sadhguru planted the last sapling of the day at the Harvi Kumarasamy Marriage Hall. He appealed for continued efforts in keeping this planet habitable, saying, "The enthusiastic volunteers have planted all these saplings today. But it is very important the saplings are watered and cared for properly so that they can grow into trees. You have to water them just as you get water for yourself when you feel thirsty.

Today, desertification is happening at a tremendous speed. I want to leave the earth as green as it was when I was born. Water is the elixir of our life. Even the Ganga, which we worship as god, is going to be a seasonal river in the next eight to nine years. The consequence of this will be very devastating. If we are not doing anything about this now, our children may only know rivers from books. Environment conservation is not a government job, neither Isha's job. Whoever is taking in the life-giving source that water is, should participate."