Hampton Roads Publishing, the book publisher of Midnights with the Mystic, was present at the 2008 BookExpo America (BEA) in Los Angeles, the 3rd largest book expo in the world. The timing of this coincided with Sadhguru's scheduled tour and so along with the publisher promoting the very well received book, both Cheryl and Sadhguru were present on 31 May to answer questions and sign books.

Continuing his California tour, Sadhguru spoke to a crowd in downtown Los Angeles at the Bodhi Tree Bookstore, well known for hosting spiritual speakers. Breaking the preconceptions of mystics, Sadhguru entered wearing jeans and sunglasses, appearing casual; nonetheless his words were infused with much insight and profundity. His opening topic brought attention to Gautama and the tree under which he became enlightened, revealing the significance of the Bookstore's name. Sadhguru also addressed a message to the children in the audience as they listened alertly along with their parents. His discourse certainly inspired everyone present, and motivated them to obtain a copy of Midnights with the Mystic which has already become a bestseller at the Bodhi Tree.

That same evening, a small group of people had the privilege to be in Sadhguru's Presence at a private dinner talk in Santa Barbara. Nestled in the Mediterranean-style hills carpeted with exotic vegetation, the setting was an ideal place to encounter the Mystic. Live music filled the air like the fragrance of fresh flowers as the invitees mingled with Sadhguru. After being nourished by a colorful home-cooked meal, the guests were spiritually nourished by words of wisdom while sitting outdoors in the backyard amphitheatre. All ears and eyes were fixed on Sadhguru under the starlit sky. Albeit well past their bedtime, even the young children sat attentively, fascinated by his stories. Having recently returned from BSP in Tennessee, the host's love and gratitude towards Sadhguru manifested in everything she had prepared that evening. As a surprise gift to Sadhguru, the evening concluded with a dynamic drum and theatre performance which sent out ripples of joyous laughter well into the night.

The Los Angeles Convention Center was the final stop of Sadhguru's public speaking tour during this visit to the United States and here too, the expectant crowd was gently serenaded by our talented musicians. Following Cheryl's introduction, Sadhguru ascended to the dais and greeted the assembled crowd with a penetrating chant before continuing to captivate the crowd with his discourse, interspersed with stories and jokes which conveyed profound wisdom in an easy-to-understand fashion. Towards the end of the talk, Sadhguru reminded everyone that happiness need not be an accidental happening, depending on outside situations, but can be taken into one's own hands with a little bit of Inner Engineering. 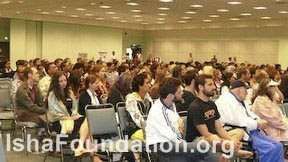 He said, "The most natural thing for a human being is to meditate. As fragrance is for a flower, meditation is for human beings." With this introduction, Sadhguru guided the audience into a meditation, designed to give a taste of this possibility that is within every human being.

Opening the floor to questions, Sadhguru answered each one of them in depth, addressing a multitude of topics ranging from wakefulness in sleep and its connection to death, the bliss that a drug offers and its negative effects on the human system, to the nature of the mind, using powerful stories and anecdotes. At the conclusion, those gathered eagerly awaited their turn to meet Sadhguru and have their book signed.

As the last guests left, the meditators quietly seated themselves in anticipation of a brief Sathsang with Sadhguru. They were in for a surprise as Sadhguru revealed that he had big plans for California, that Cheryl would be spending six months in California to promote the book and a second teacher would be coming to the area to conduct more frequent Inner Engineering programs. He stated that California has tremendous potential and encouraged everyone, in whatever capacity, to introduce Isha to others with this book Midnights with the Mystic, indicating that this book is a terrific 300-page brochure for Isha Yoga programs.